Lewis Fiorini was proud of the Imps after they came from behind to pick up a point on the road with a 1-1 draw against Sheffield Wednesday. 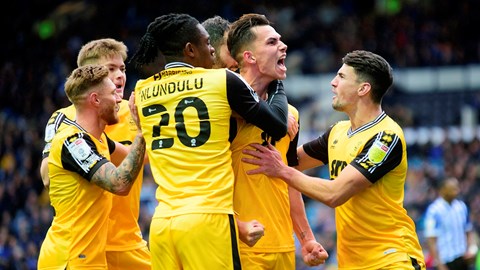 The midfielder felt the Imps could have even got more than the 1-1 draw at Hillsborough Stadium.

“I am proud of the way we performed, on reflection it’s a shame we didn’t get the three points,” he said.

“But we should still be really proud, we have come back from the disappointment of going a goal behind at a place like Hillsborough.

“Our supporters travelled in numbers, there were more than 3,000 and they got us through it in the end.”

The 19-year-old turned his attention to his personal performance, explaining he wants to continue improving under Michael Appleton.

"Last year when I went on loan in Holland, there were no supporters because of Covid. I would say that helped me develop in my first year but playing in front of 23,000 is another level, that’s important for me.

“I am happy with my time so far, I set my targets high when I first joined the club, so I will continue to keep working hard for the team and the Gaffer.”

Fiorini finished by praising team-mate Freddie Draper, who made his Imps league debut at the age of 17.

“I felt old when Freddie came on,” he added.

“it’s a great achievement for him. He has worked hard in training: he has come back from injury, so we are all happy for him to make his debut."

The Imps are back in action on Tuesday night when they travel to Wigan Athletic. Fans who cannot get to the DW Stadium can watch live via iFollow Rovers - click here to see the subscription options wherever you are.