Hakeeb Adelakun has enjoyed developing a mentoring role to pass on his experience to the squad's younger players. 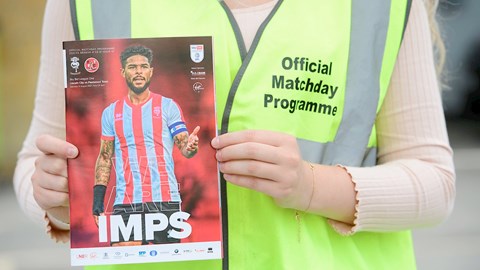 Help us save the matchday programme

The 25-year-old believes having Academy players and young first-year pros like Freddie Draper and Jovon Makama regularly train with the first team will really paid dividends.

He said: “Even at 18, those players coming through and training with us will feel the difference.

“I think I’ve got to grips with helping them settle and integrate, which is good, and it does help that I’ve been there and had to do it myself.

“I’m still young and learning so I’ll help them where I can, but we also have more experienced players who take responsibility and help players like myself."

Adelakun has settled into his role with the Imps nicely after finding his feet in his new surroundings.

He added: “Life in Lincoln has been good. Everyone has helped me settle in really well, it’s nice to be getting a run in the team and getting lots of minutes.

“It has been a challenge coming into the team but it’s always a challenge to get up to speed - you realise how crucial pre-seasons are when you don’t really have one.”

Hakeeb Adelakun is the feature interview in Saturday's matchday programme, which is available from sellers around the stadium as well as from the ticket office, with fans able to pay by cash or card. If you cannot get to the match then order your copy online now.