Michael Appleton’s side made it three wins on the bounce and four clean sheets in a row after a positive performance against Crewe Alexandra this evening. A solitary strike from Harry Anderson late in the first half was the decisive goal which brought the points for The Imps at the Alexandra Stadium.

City dominated the first half with the home side having the frame of the goal and the form of ‘keeper Will Jaaskelainen to thank for keeping them in the game until the deadlock was broken. In the second half the home side made a late charge for an equaliser but The Imps’ defence refused to buckle to retain their spot at the top of Skybet League One.

The Imps started the game with one change from the side that defeated Ipswich Town on Saturday as Liam Bridcutt missed out through injury with Tom Hopper returning to the starting eleven in his place.

City almost went ahead with seconds on the clock, Lewis Montsma hit a thunderous effort from outside the area that caught Will Jaaskelainen unware as the ball flashed over his head but he was thankful to see it crash off the top of the crossbar. The Imps were swarming all over the Alex defence and the home side had their ‘keeper to thank in the third minute when Joe Walsh nodded down a Jorge Grant corner into the path of Conor McGrandles, he turned it goalwards but Jaaskelainen was in the right place to grab possession.

James Jones was then denied by the Alex stopper, before Montsma returned the rebound but again Jaaskelainen was in the way as The Imps continued to pour forward in a breathless opening ten minutes. City went even closer when Tom Hopper hit the post from a TJ Eyoma cross as the ball seemed to be permanently positioned inside the Alex half as Michael Appleton’s men maintained the pressure.

However, it wasn’t going to go all City’s way and whilst the scores remained level, the home side pushed for what would have been a goal totally against the run of play.  Alex Palmer was called into action twice in a matter of seconds, first The Imps’ ‘keeper blocked from Owen Dale then a header from Mikael Mandron was grasped gleefully by Palmer.

Walsh turned a dangerous centre from the right over his own bar with Mandron in close attendance as it appeared that the home side had regained their composure after what had been a very one sided first half an hour. 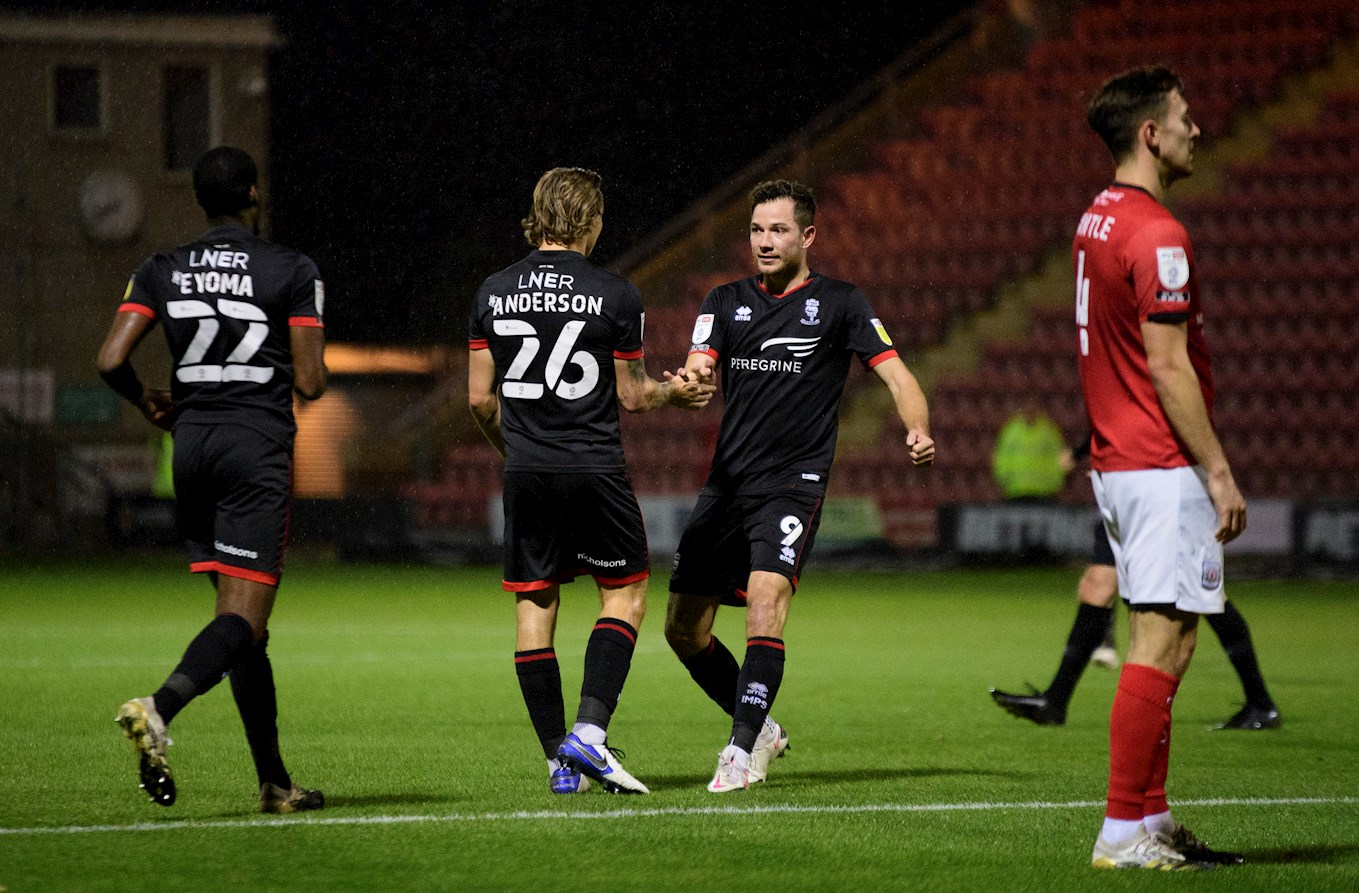 However, City’s presence and persistence in the opposing half was finally to bear fruit just ahead of the break, Grant’s ball forward found Jones who won his aerial battle, nodding the ball back to the edge of the area to Harry ANDERSON, he took a touch before smashing a shot hard and low across the ‘keeper and into the far corner from the edge of the area.

City were inches away from extending their lead early in the second half, McGrandles set Johnson free and The Imps’ number 20 hurtled towards goal, he smashed the ball goalward only to see Jaaskelainen make a terrific diving save. Hopper followed up, marked by a Crewe defender and just as it seemed the ball was going to ripple the net to everyone’s amazement the combination of the Crewe ‘keeper and defender the ball bounced agonisingly away from the far post.

The home side made a change before the hour mark, bringing on Tom Lowery and the substitute had a hand in Crewe’s first chance of the second half laying off for Perry Ng to smash a dangerous low centre that flashed right across the front of the City goal.

The Imps were soon back on the front foot, pushing for a second goal but once again there was stern resistance from the home side who were managing to keep City at bay.

David Artell’s team began to grow in confidence and for the first time in the game were having a spell of positive possession of their own, with Charlie Kirk on the left and sub Daniel Powell on the right looking threatening.

Harry Pickering chipped in a teasing cross which Mandron was inches away from although Walsh was in close attendance, doing just enough to keep the striker from making the vital touch.  Powell then tried a low shot on the half volley, but in truth the angles were against him allowing Palmer to be square onto the ball and coolly grab possession.  The Imps’ feathers remained unruffled as they stayed well drilled, despite the best attempts of the Railwaymen to level the scores as Appleton's men picked up another valuable three points.