The Imps picked up three points at LNER Stadium as they faced Burton Albion in SkyBet League One Action! Tom Hopper was on form bagging a first half brace before Anthony Scully added a third in the second half. Josh Vickers was the hero late in the day though stopping a penalty from Lucas Atkins.

The Imps starting line-up saw three changes to the side that faced Gillingham a fortnight ago. Tayo Edun missed out on suspension with Max Melbourne coming back into the side following a time sidelined with injury.

Alan Sheehan made his debut for City replacing Cian Bolger who made the bench for Michael Appleton’s side.  Joe Morrell also returned to the line-up following time out suspended with Jake Hesketh featuring on the Imps bench. 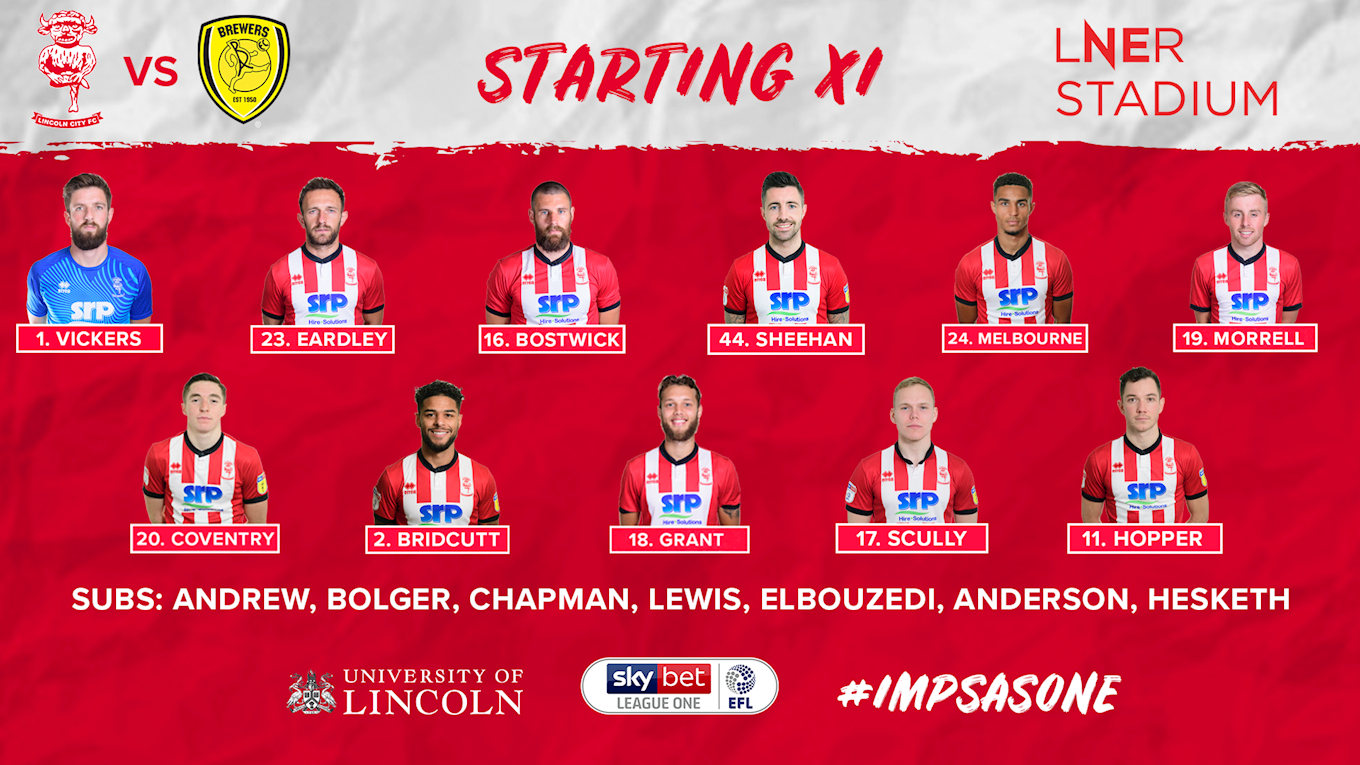 The visiting side were the first off the mark as Joe Powell broke the deadlock after just six minutes. Jamie Murphy created the goal passing to the Burton forward who took a touch before driving his shot under Josh Vickers in the Lincoln goal.

City had to defend again moments later when Stephen Quinn played a ball wide to Murphy, who produced a cross into the box which turned towards goal before being blocked by Eardley.

Alan Sheehan was called into action for the Imps when Murphy looked tricky in at the front post. The City debutant dealt with the situation well beating his man to knock the ball out for a corner which came to nothing for the visiting side.

Jorge Grant was the man who created the Imps’ first shooting opportunity, winning the ball out wide before bringing it into the edge of the box where he found Joe Morrell, however, the Welsh international wasn’t able to produce a clean shot, putting his effort high and wide.

Lincoln won a free-kick moments letter on the edge of the box which Grant stood over. He hit it well, but the wall did their job to block it, forcing the ball out for a corner. Sheehan was waiting at the back post for the delivery however, the defender wasn’t able to time his run with the ball going out for a goal kick.

It was TOM HOPPER who equalised for Lincoln just after the 20th-minute mark as he tapped home at the back post with Anthony Scully getting the assist as he played the ball cleverly across goal.

Scully nearly found the net himself minutes later when he picked up the ball in the middle of the pitch, running forward with no defensive effort made by Burton. The Irish youngster then unleashed a driven shot which bounced just wide of the left post.

Lincoln looked like they had grown into the game creating more attacking opportunities as the game went on. This time it was Morrell who won a free-kick on the left-hand side of the box allowing Grant to fire one in forcing the Burton defence to clear as they came under pressure again.

Grant and Morrell continued to chase forward for the Imps, making the visiting team produce fouls on Lincoln’s men. Morrell was clattered by Powell just in front of the home dugout, giving the Imps possession.

However, from an attacking view Powell was on form, knocking the ball in from close range as Reece Hutchinson was able to fire a cross in after being found by Lucas Akins who played the switch.

HOPPER followed the trend, bagging his second of the game just like Burton’s Powell had done less than ten minutes before. Scully delivered the ball in from the right after receiving it from fellow countryman Conor Coventry. Grant was waiting at the back post where he was able to get up and play it across goal for Hopper to smash home, levelling the scores.

The fourth official indicated that there would be two minutes added time as both sides looked to take the lead. Hopper forced Burton goalkeeper Ben Garratt into a clearance when the striker closed him down in a difficult situation.

Vickers was forced to make a save in the opening stages of the second half when Powell fired in a dangerous free-kick which curled towards the near post, where Murphy was waiting to flick his effort towards goal. The Imps goalkeeper was in action against moments later producing another fine stop to keep the scores level.

Coventry was called into making a last-minute dive in front of the ball as Burton broke forward leaving Sheehan down injured in the visitor’s half. With the game firing up the referee made his first booking of the day with Michael Bostwick receiving a yellow card, John Joe O’Toole was also booked.

The Imps were soon to take the lead with Morrell banging an impressive strike towards Garrett. Neal Eardley produced the cross which allowed the Imps midfielder to hit it on the volley, before the effort came off Scully, with the Irishman claiming his second goal of the season.

The first changes of the game came with less than 20 minutes left when Burton brought Scott Fraser and Colin Daniel on for Reece Hutchinson and Ryan Edwards. Moments later Jake Buxton found himself in the referee’s book for a foul on Hooper.

It looked like Morrell had added a fourth for the Imps, the midfielder saw his shot go just over the crossbar following a great pass from Hopper who skipped past the Burton defence.

Burton had a throw deep in the City half which found Powell who saw his initial cross blocked, a second cross came in and a penalty was awarded to the visitors.

Akins stood up to take the spot-kick which was saved superbly by Vickers in the City goal. Burton kept coming at the Imps but it was Max Melbourne who was the hero for the Imps producing an on the line block to keep Lincoln ahead.

Burton made their final change of the game when Joe Sbarra came on for the booked Buxton. Lincoln followed making their first change of the game a minute before the 90 was up as Harry Anderson replaced Grant in the City midfield.