By October 2019 it was clear that in Tyler Walker we were watching one of the most natural goal scorers of recent times.  This picture summed up for me his natural instincts in that he gambled on getting to the ball before the Sunderland keeper, and that gamble paid off. I have always loved watching the stadium fill up during the hours before kick-off, this image summed up how emotive and beautiful the LNER Stadium is. Pride, passion and determination summed up in one picture. Last minute wonder free-kick to secure all 3 points against rivals Peterborough United. Sometimes football is not about playing in perfect conditions, it is about simply rolling up your sleeves and battling your opponent and the conditions.  This image from a rain-soaked Accrington, as Jake Hesketh vies for possession with Accrington Stanley's Sam Finley, sums that up for me. Determination to win, and utilise your physical presence summed up in Anthony Scully’s face as he battles for possession with Burton Albion's Reece Hutchinson in our last game of the 2019/20 season.  This image shows why Anthony will become a real fans favourite throughout his career. As a photographer, I am always looking to tell a story at each match. I want to capture images that communicate with the fans.

From the action on the pitch, the critical goals, the emotion in the celebrations through to the battles going on all over the pitch. But football is more than what is happening on the pitch.

As a football club, we know how important our fans are. And the role they play on a matchday. Sat pitchside seeing full stands as the backdrop to my images has been special. And the noise and atmosphere has been something else! So as a photographer images of the fans is part of the story of the game.

There is something about arriving at the ground. The anticipation, the build-up, the hope. I had the chance to look for some different images today and wanted to utilise the lights to create an atmospheric image. Seeing fans filling LNER Stadium has really lifted the background of images over the past few years. And not many football stadiums have a background as magnificent as Lincoln Cathedral, which had recently switched on it’s new eco-friendly lighting system. I wanted to capture an image that showed the Lincolnshire Co-op Stand full with the view over towards the Cathedral. Our final game of the decade and the sun setting over LNER Stadium made for some picturesque images. Tyler Walker helpfully scored our third goal of the game just as the sky was filled with deep blue and burnt orange.

Talking to Tyreece when he signed, he said that putting his finger to his lips was his trademark goal celebration. As Tyreece scored and ran towards the corner I was sitting to celebrate the goal, I was hoping to make sure I got the image of this. Looking through the lens I could tell Tyreece had clocked my camera and put his finger to his lips for a split second whilst looking straight down my lens. 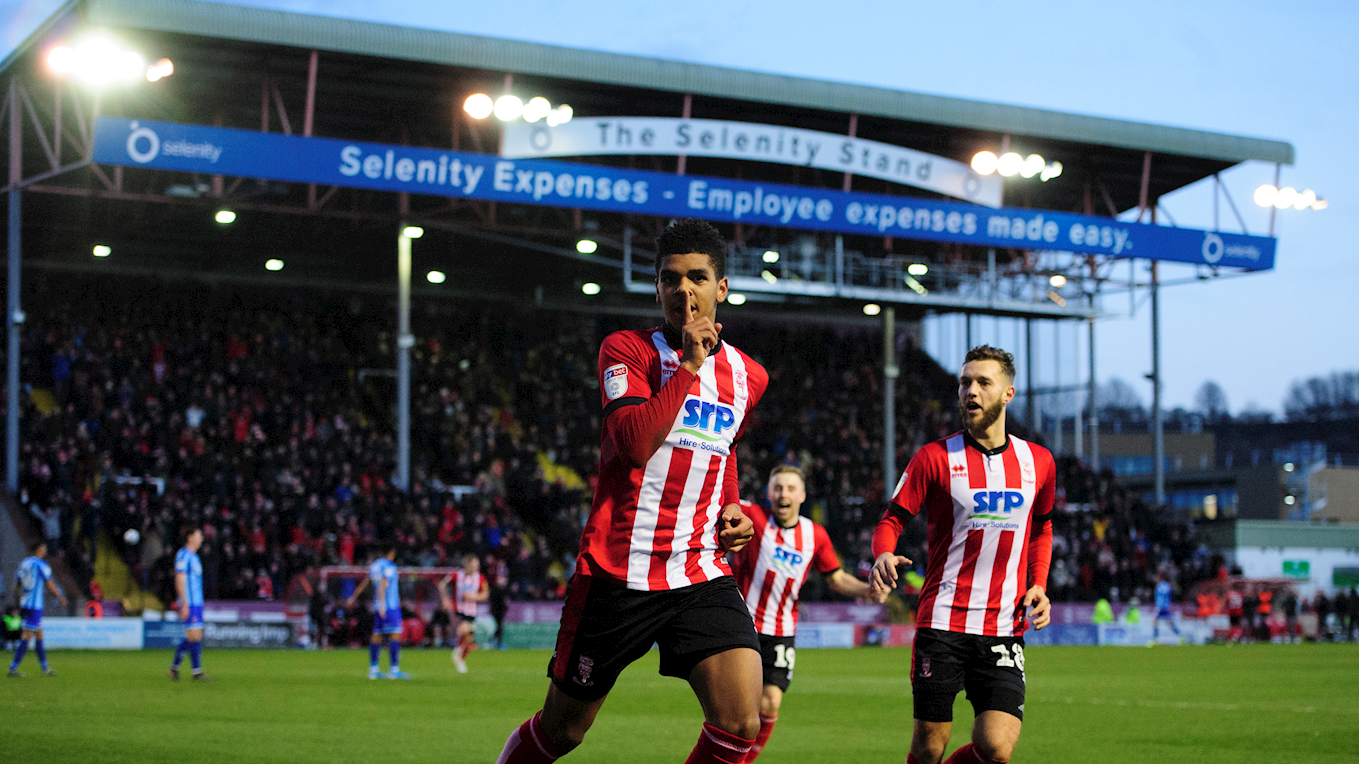 I look for opportunities to put a remote camera out at grounds. When I do this, I always look to try and get a different angle. Using remote cameras can be very hit and miss because you have no control over ensuring the action is framed and in focus. For me, the contrast between the two sets of players makes this image, as Tom Hopper celebrates his first goal of the afternoon, in what proved to be our final game of the 2019/20 season. 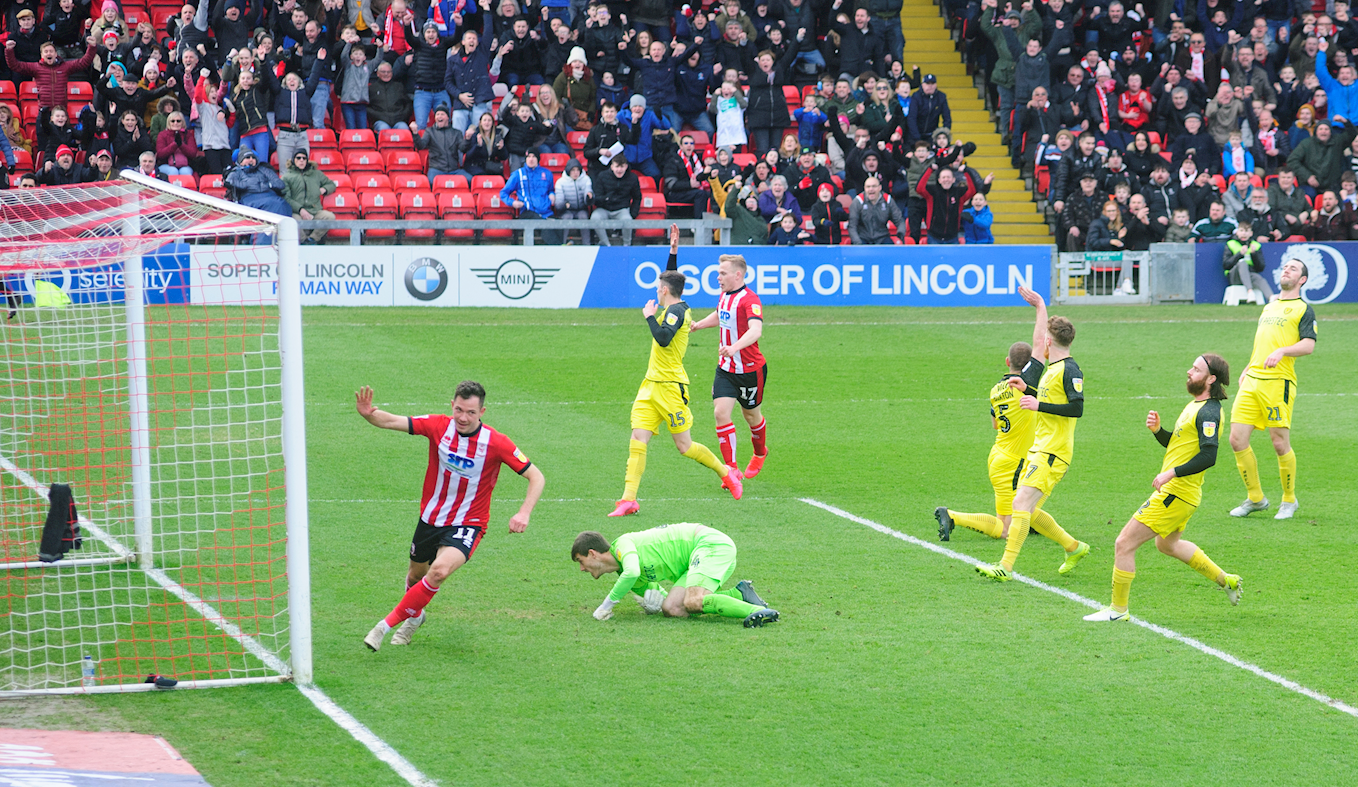 Being asked to choose five pics from the last season proved to be a very hard task! But one of the things I like to see in my pictures are facial expressions, so all five of these reflect that. I like this one because I think it’s a good action picture but the players' faces make it into a short story for me! I liked capturing the moment Neal trapped the ball that was fired to him from a long way away, but the concentration on his face makes it! I like to sit just inside the 18-yard box because I can get an angle towards the crowd for pictures just like this one! That means I can capture those wonderful joyous expressions on the fans faces. Purely and simply the utter joy on Harry’s face! It’s not always about celebratory joy, it’s also about the “pain”. See what I did there?