The Imps suffered defeat on the road as Luke Woolfenden's header was all it took for Ipswich to secure three points this afternoon.

The Imps’ starting 11 remained unchanged from last Saturday’s 1-0 win over Blackpool at LNER Stadium with goal scorer Tyreece John-Jules starting his third game of the season.

New arrival Tom Hopper made the bench for the first time after joining the club earlier this week replacing attacking midfielder Jack Payne. 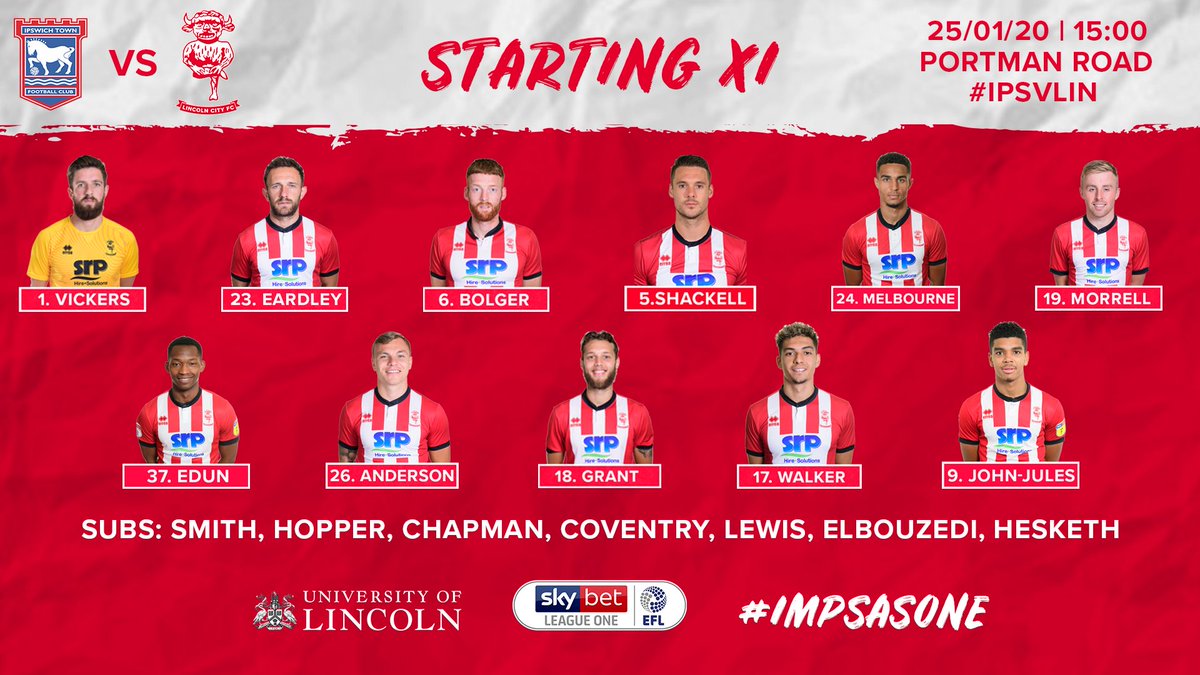 The home side kicked the action off attacking the left side early on. However, their first chance of the game came from the opposite wing with a cross delivered to in-form striker Kayden Jackson. The forward couldn’t turn goalward, forcing Will Keane to strike early, seeing his shot go out for the first corner of the game. Luke Garbutt took the set-piece however; the Imps were under no threat, comfortably seeing the ball out of the danger zone.

Ipswich continued to attack with Gwion Edwards forcing himself down the right-wing. The former Welsh U21 delivered an impressive ball into the area for Keane who was met by fellow countryman Neal Eardley, the Imps full-back was able to clear for a corner. The set-piece was then dealt with comfortably by Jorge Grant who blocked the delivery from Alan Judge.

Town fancied their chances again shortly after when Ipswich won a free-kick following a foul on Flynn Downes. Emyr Huws was waiting on the edge of the box to open fire as Ipswich played a clever short pass from the set-piece, however, the number 44 saw his shot blast into Tyreece John-Jules.

The Imps replied with a counterattack from Ipswich’s corner. Grant picked the ball up in the area and ran 40-yards before trying to play Tyler Walker through on goal, but Will Norris was already off his line to beat the City forward to the ball.

Tayo Edun made a great interception to stop an Ipswich attack. The midfielder was able to trap the ball before playing it to John-Jules. The Imps continued to attack winning a throwing which resulted in a corner.

Grant delivered the ball to the near post, where Cian Bolger was, but the centre back couldn’t quite get the direction right on the header and it went out for a goal kick.

Bolger was involved in the action at the other end of the field when Judge tried to force his way into and through the Imps penalty area. The City defender was having none of it, blocking the midfielder’s run, putting the ball out for a corner.

Keane was hungry for a goal as he burst through the Imps defence with a flash of pace beating Jason Shackell. The Town forward looked certain to score but he could only watch as his strike went just wide of Josh Vickers’ goal.

City kept fighting back though with the scores still level. This time it was Walker with the ball at his feet. He stopped, turned and had a shot forcing Will Norris to tip the effort over for a corner.

Grant was on duty for the corner as the Imps looked to take the lead. His cross fell into the area and only needed a touch from a Lincoln man, but Norris was the first there to make sure it was his.

Moments later City seemed to have gained momentum as John-Jules raced through the Ipswich half towards the box, he flicked it over Luke Woolfenden who looked to have handled the ball, however, the referee waved play on with Ipswich taking possession.

With the half heading into its closing stages, Joe Morrell saw yellow for a challenge on Flynn Downes as Ipswich won a free-kick. Garbutt took the set-piece but saw his delivery blocked by Shackell. The ball fell to Edwards who was fouled in the left channel, winning a second free-kick for the home side.

The initial free-kick was blocked by Grant, but the second cross from Judge came into the box where Edun was. The Imps midfielder again produced a nice interception but he was then brought down by Woolfenden, winning a free-kick for Lincoln

As Ipswich attacked again, Judge was fouled in the corner winning another free-kick for the home side. Garbutt fired the ball into the area perfectly for Woolfenden to quickly become the hero as he headed home the goal which would give Town the lead going into the break.

The Imps started the second half well with Eardley out wide, the fullback passed the ball inside to Morrell who crossed it towards John-Jules before Woolfenden came crashing in to clear.

City were a kick away from equalising when the ball landed in the Ipswich area. It started with Eardley and Anderson linking up well before playing the ball into the box. Grant was waiting to strike but as the ball came towards his feet it got stuck under Woolfenden who was on the ground, Town soon cleared for a corner.

Vickers pulled off a superb save for Lincoln as Garbutt cut inside and hit a low effort arrowing into the left corner with Town fans thinking they had extended their lead.

With the Imps looking for an equaliser, City made the first change of the game with new arrival Tom Hopper coming on for John-Jules.

Bolger was the second man to have his name taken when Lee Swabey booked the defender for a challenge on Jackson who ran across the Irishman’s path.

The home side were on the attack when the ball went curling into the heart of the six-yard box, former Lincoln man James Wilson was there but his header flashed wide resulting in a goal kick to The Imps.

Ipswich made their first change of the game as Teddy Bishop replaced Judge in midfield.

Coventry picked the ball up in midfield before playing a great lobbed through ball onto Walker. The Imps striker was met by Wilson who miskicked his clearance, allowing the City man to win the ball back. As Walker retained possession, Wilson put a foot in to give Lincoln a corner, however, the set-piece caused no danger for the home side.

In a bizarre moment, Ipswich saw a member of their backroom staff receive a yellow card for encroaching play. This didn’t seem to have any effect on the home side as they soon picked the ball up in the middle of the park, before rushing forward in an attempt to break through the Lincoln backline.

Lincoln continued to look for an equaliser as Hopper received the ball, the striker played a great pass through to Grant who put one touch too many on it, allowing Woolfenden and Wilson to come across and restrict the midfielder’s options.

Town had another man booked as the game headed into the final few minutes with Downes receiving a yellow card for a foul on Hopper.