City and Gillingham couldn't be separated at LNER Stadium with the pair sharing the points following a goalless draw in SkyBet League One action.

The Imps’ starting 11 saw two changes to the starting line-up which faced Accrington Stanley at the Wham Stadium last weekend.

Jason Shackell was absent from the squad with Michael Bostwick making his first start for the Imps since Lincoln faced Sunderland back in January. Harry Anderson was on the bench as Conor Coventry came into the side with Jorge Grant playing on the right and Anthony Scully on the left. 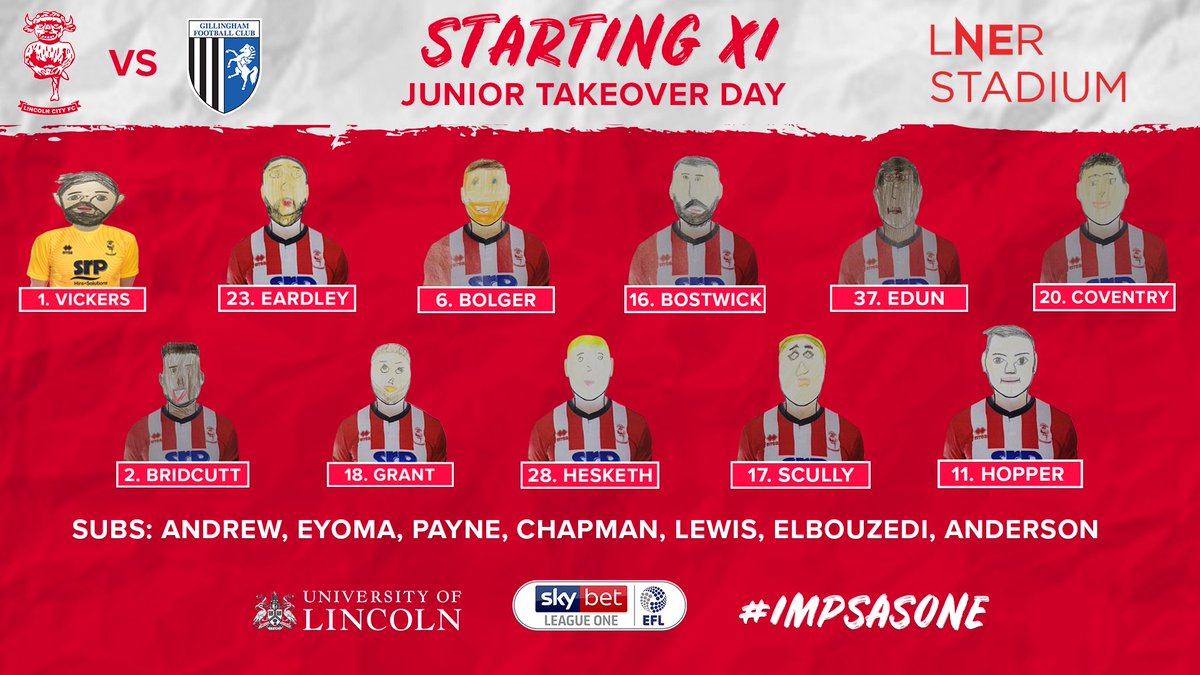 The visiting side kicked things off at LNER Stadium on what was a windy day in Lincoln. The possession quickly switched with the Imps picking up the ball in their own half in the opening seconds.

Tom Hopper did well getting the ball down for Lincoln before finding Anthony Scully who linked up well with Neal Eardley on the right side with a one-two however, Gillingham’s Conor Ogilvie was there to block the Irishman’s run.

The Imps almost snatched the lead when Jack Bonham in the visiting goal misplaced his kick for Scully to pick up in front of the Gillingham defence. The young forward burst forward and tried to find Hopper who was across goal, but the Gills had managed to get back and play their goalkeeper out of trouble.

City’s first booking came just before the 15-minute mark with Jake Hesketh receiving a yellow for a late challenge on Ogilvie. In a rare occurrence of events, it was manager Steve Evans who picked up the visitors first yellow moments later.

The Imps continued to create chances, this time it was Eardley who produced the delivery across goal following a superb pass to the wing from Conor Coventry. City were unlucky with Scully’s run being just short at the back post as they continued to cause a threat to Bonham’s area.

Scully came close just before the half an hour mark with some great passing play from the Imps which saw Tayo Edun and Hooper work together with the full-back delivering a great cross into the far post. The Irishman was unlucky not to score as his shot went just wide of Bonham’s near post.

Josh Vickers pulled off an impressive save from close range with Max Ehmer attempting a shot on target inside the Imps’ area. The rebound fell to Ogilvie who was on the edge of the box, but Jorge Grant was able to get possession and clear forward, putting his foot through the ball.

Former Lincoln man Jordan Roberts required treatment 10 minutes before the break as he went down following a challenge on Coventry.

Eardley fancied his chances on goal as he came one-on-one with Bonham following a great switch wide from Hesketh. The full-back’s drilled shot called the goalkeeper into action with a good save.

With no major attacks from either side, the referee blew up for the break for half-time following three minutes added time.

Both sides came out looking to break the deadlock, but it was Grant who created Lincoln's first chance of the second half when his incredible run forward found Scully on the far side of the box, however, the Irishman's shot was weak as it was comfortably collected by Bonham.

The home side made their first change of the game just before the hour mark with Hesketh being replaced by Harry Anderson.

Edun was the second City player in the book for a foul on Hanlan which gave the visiting side an opportunity to fire the ball into the box. However, Coventry was able to get his head on the incoming set-piece, which resulted in a Gillingham corner. The pressure continued on the hour mark with a series of corners being fired into the Imps area, however, the last was cleared by Liam Bridcutt giving Lincoln some time to breathe.

The Imps won a free-kick when their captain, Bridcutt was fouled by Roberts. Grant stood over the set-piece which was placed perfectly onto Cian Bolger's head however, his knock across goal wasn't enough to be knocked in by a teammate.

Two former City players were involved in a Gillingham change as John Akinde came on for Roberts with the home side looking for another attacking option to try and snatch a lead.

Barry Fuller found himself in the book for an aggressive foul on Grant which saw a number of players coming together. Liam Bridcutt also received a yellow card following the challenge. Lincoln won a corner following their free-kick with Harry Anderson's cross hitting a Gillingham shirt before going out. The delivery didn't beat the first man, however, the Imps won a throwing from the Gills' clearance.

Hopper won a free-kick for City in the visiting side's half when Tucker pushed the Imps forward. Grant fired it in before finding Coventry on the opposite the side. The young midfielder placed a cross into Hopper who flicked it onto Anderson's who also headed the ball, this time forcing Bonham to make a vital save for Gillingham to keep the scores level.

Steve Evans made a second change for the visiting side when Jordan Graham came on for Stuart O'Keefe. Shortly after the away side made their final substitute when Oliver Lee was replaced by Regan Charles-Cook

Scully continued to be a nuisance winning the ball in difficult situations, this time winning a corner for the Imps. The ball came in landing to Anderson who mistimed his shot blasting it over.

Tayo Edun was sent off with his second yellow in the 90th minute following a coming together with Hanlan, who was also booked. The fourth official then showed four minutes added time with the pair drawing 0-0.

The Imps won their fourth corner of the game in added time. Grant came over to the right side to take it after being slotted in at left-back following Edun's dismissal. With the away side trying to counter-attack Brdicutt put a brilliant challenge in before Bostwick came flying in sending Charles-Cook to the ground. The Imps defender was booked for his challenge.

With the last kick of the game, Lincoln had a free-kick just in front of the half-way line. Grant delivered it into Hopper but his header caused no threat for Bonham with the referee blowing his whistle moments after. 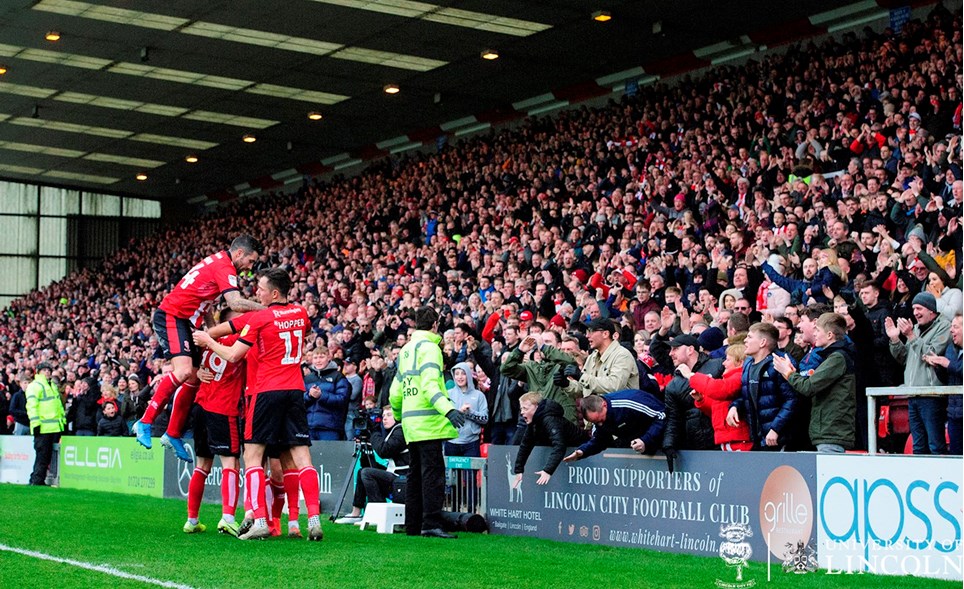 
The Imps picked up three points at LNER Stadium as they faced Burton Albion in SkyBet League One Action! Tom Hopper was on form bagging a first half brace before Anthony Scully added a third in the... 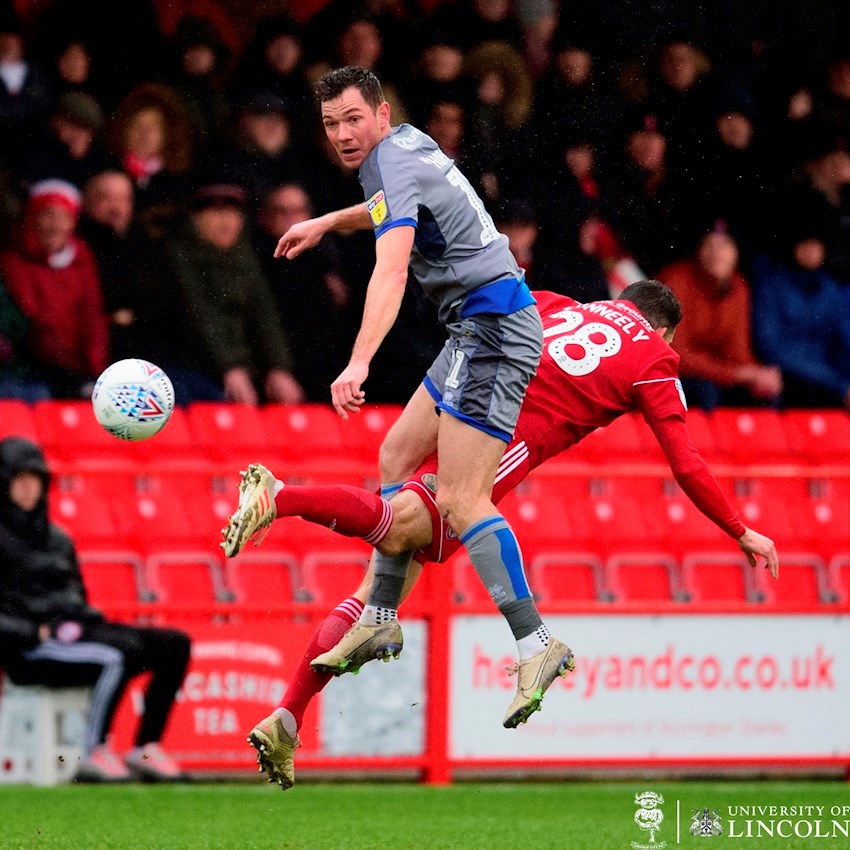 
It was goals galore at the Wham Stadium on a cold February Saturday with seven goalsa hitting the back of the net. However, the home side went home with the three points on offer thanks to Sam... 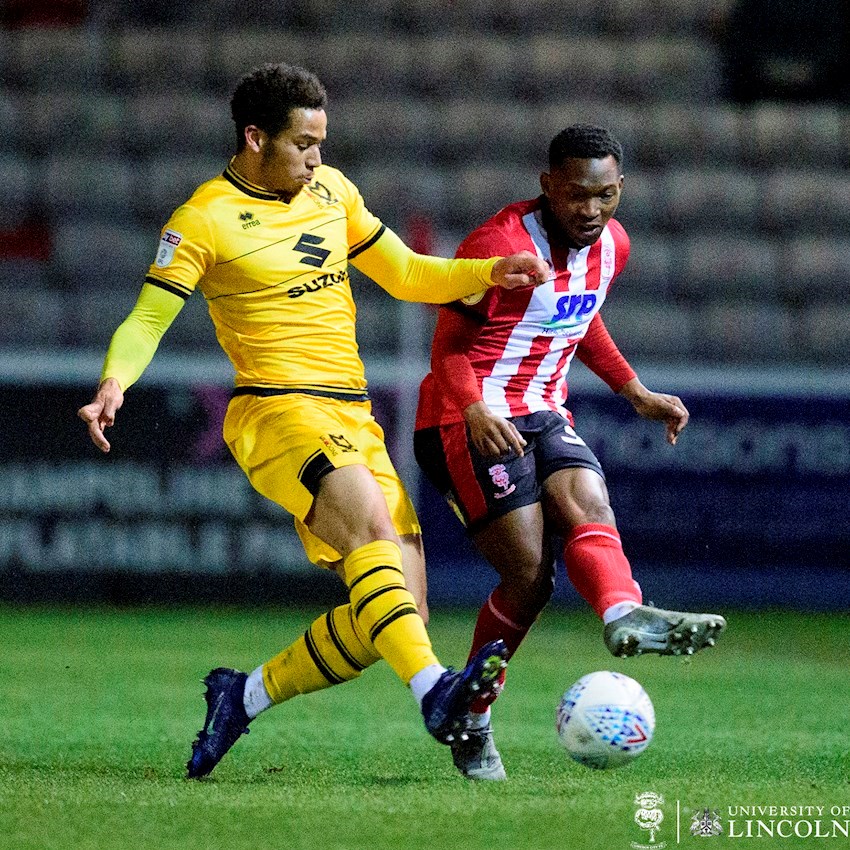 
The Imps drew 1-1 with Russell Martin's MK Dons side in SkyBet League One Action at LNER Stadium on a cold Tuesday evening. Liam Bridcutt's first half wonder strike claimed the point for Michael... 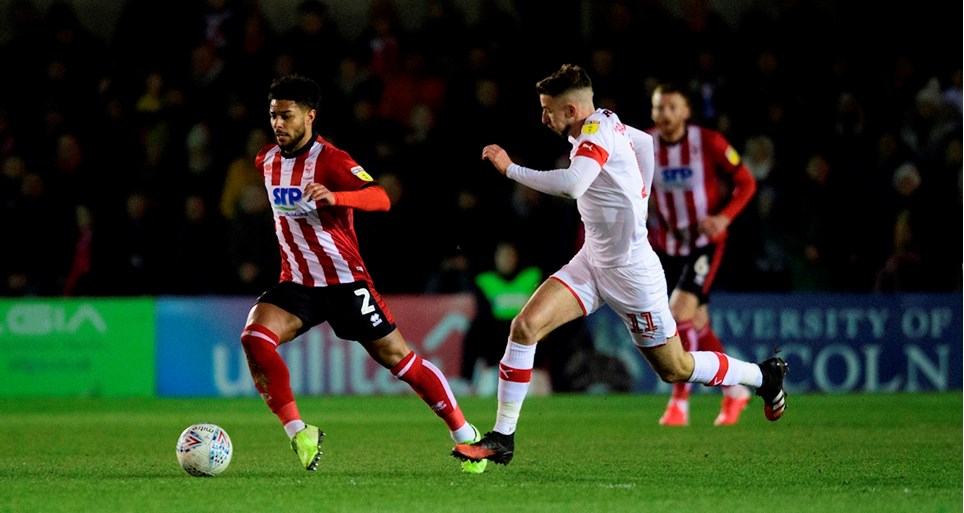 
The Imps lost out by one goal to Rotherham at LNER Stadium with Matt Crooks’ early second half header grabbing the visiting side three points.