It's a day not many Imps will have witnessed, in fact fewer than 4,000 will have been present, but 15th January 2005 will be a day Lincoln City won't forget in a hurry and that was largely down a 16-year-old Lincoln City Academy defender from Moulton, South Lincolnshire. Jack Hobbs made history becoming Lincoln City's youngest ever Football League appearance maker, but that was only the beginning for the teenage centre-half.

Aged just 16 years and 150 days, Hobbs broke a 19-year record set by Shane Nicholson as the Imps' youngest player, by 22 days. If Nicholson's career was anything to go by Hobbs was in for a treat. Nicholson in fact made more than 500 league appearances, something which Hobbs would certainly have taken at the time.

The Imps hosted Bristol Rovers that afternoon, and were level after Junior Agogo had cancelled out Francis Green's opener for City. It probably wasn't a game that won't live too long in the 3,929 attendance's memory, but the 89th minute will for the majority, and particularly Hobbs.

Keith Alexander decided that Hobbs would replace Matt Bloomer in the closing stages of the game for his debut and only appearance for the Imps. Ironically, a former Imp Lee Thorpe, and future Imp, Jamie Forrester were Rovers' strikers that night. 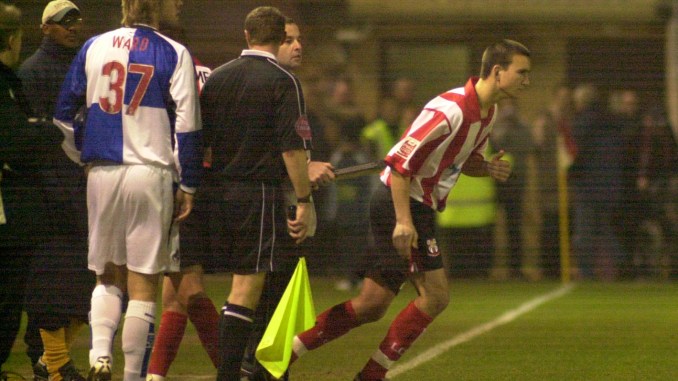 "There was a lot of nervous energy. I wanted to make sure I did nothing wrong, and I suppose stay out the way at times," the Bolton Wanderers defender said.

"But when I got put on the pitch to make my debut, I remember thinking ‘don’t do anything wrong’ just do my bits well. It must have been right before stoppage time, but I just wanted to get on and get a few touches of the ball.

"I remember thinking ‘wow this lad from Moulton is playing in League Two’ and I was so proud of myself. It was an amazing achievement."

Keith may have been the man to give Hobbs his debut, but then Youth Team Manager and another former player, John Schofield, was someone who Hobbs believed was pivotal to his personal and player development.

"I had been at Lincoln since I was around nine years old. My Dad used to drive me up from South Lincolnshire twice a week. He would get back from work and take me to training, and that was under John Schofield.

"It was a great learning environment for me into proper men’s football. I learned a lot and got some really good guidance from John and others.

"I got asked to play up an age group in the Academy, so John probably saw something in me. It was a great experience for me before I signed a scholarship.

"Moving away from home and into digs, with football full-time was good. It was hard, but enjoyable. Schoey was always there, but he didn’t take any rubbish, and if you were slacking he wouldn’t stand for it, which was a good thing.

"It was good to learn about how to conduct myself as well as the other side of it, including what was expected of you at a football club. It really helped my career." 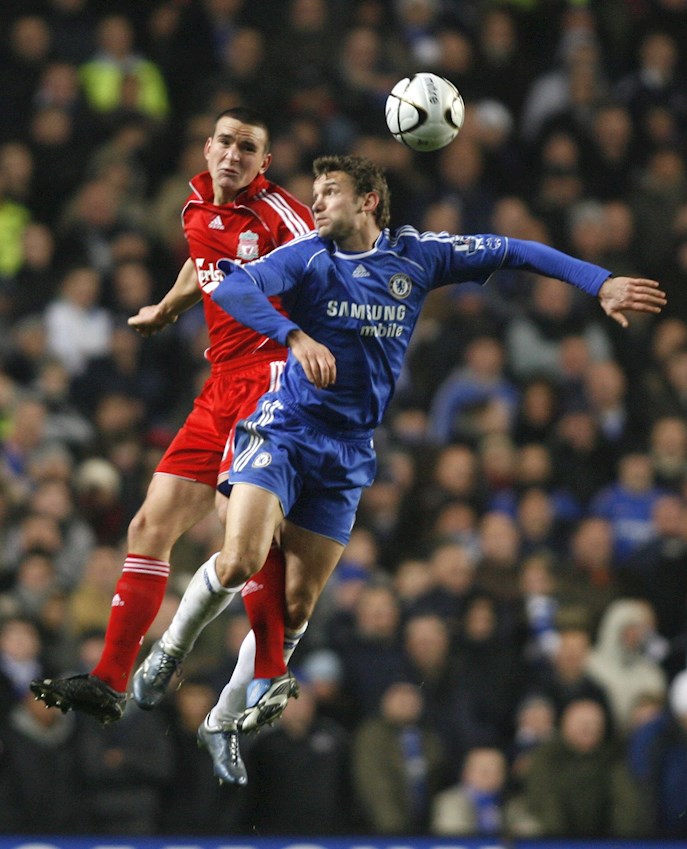 Hobbs' progression into the first team environment, and particularly starring for the reserves was where he first came across City's manager.

"Keith was good and gave me some good advice out on the training pitch. He would always take time to speak to me and give bits of information to improve.

"I was only involved in a few squads following, but for him to give me an opportunity to be involved with the first team was amazing.

"I look back at Lincoln with some special memories."

Hobbs attracted a lot of interest from Premier League clubs as the season progressed, but it was the then five-time European Champions, who had just done the impossible in Istanbul by defeating AC Milan in one of the most entertaining Champions League final's of all-time who won the race to sign the 16-year-old centre-half.

From Sincil Bank to Anfield, Hobbs had done what many have dreamt, but the journey was just beginning.

"There was always an element of doubt in my mind, that it was just speculation, and I just wanted it to be done and signed," he recalled.

"Everyone was mentioning it to me at Lincoln, and asking me if anything is happening. I just wanted it sorted, agreed and signed then relax.

"They were all very welcoming into the club and place. It was surreal to begin with. I just remember hoping to do myself justice in training. I wanted to settle in.

"It’s a big leap from Lincoln to Liverpool and I had to learn a lot. I got my head down, worked as hard as I could and see where it took me.

"Sami Hyypia gave me bits of advice after training, who seemed willing to pass on his knowledge and guidance which I appreciated. He was a valuable source to learn from with his past achivements in the game."

After playing a key part in Liverpool's 2005/06 FA Youth Cup triumph in his first season with the Reds, Hobbs played a key part in in Liverpool's reserve side for the next couple of years, before making his long-awaited debut in a 4-2 cup victory at Reading in September, 2007. 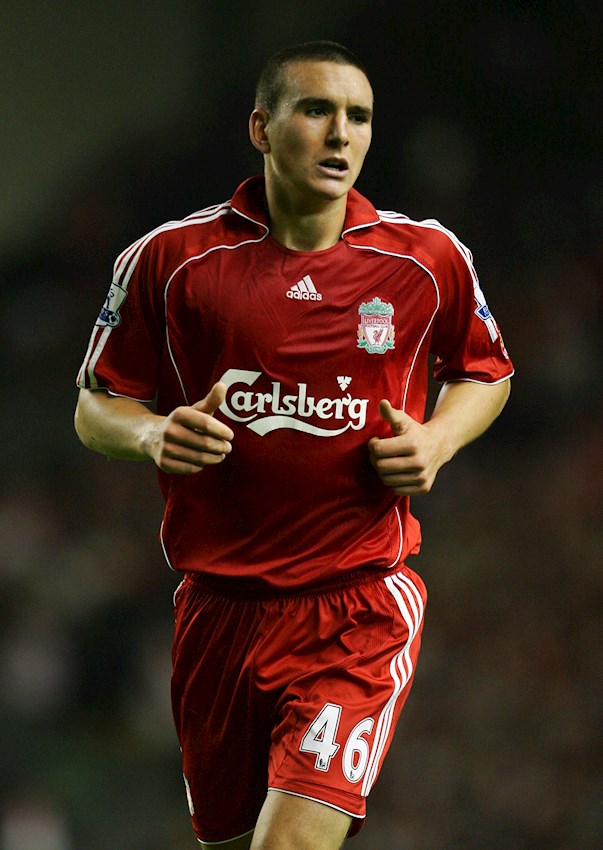 Again, he came on as an 89th minute substitute, but made his full debut in the following round, starting alongside Jamie Carragher in the heart of the defence, while sharing a pitch with the likes of Javier Mascherano and Steven Gerrard, who scored the Reds' winner in a 2-1 win on the night.

"Stevie G was always able to deliver whether it was Champions League finals, cup finals, you name it. You just knew he’d do something special."

Hobbs had to wait until December of that season to make his Premier League debut, however. The then-19-year-old replaced Jamie Carragher in the 51st minute at Anfield, moving alongside Sami Hyypia in the heart of the Liverpool defence in what ended up being a 4-0 win over current side, Bolton Wanderers.

"Making my Premier League debut was a massive moment for me. You watch Match of the Day when you are younger and I never thought I would have played to that level back then.

"To play in the Football League was a proud moment for me, but my Premier League debut was pretty special for me."

Jack made a handful of appearances for the Reds, and what proved to be his last appearance for Liverpool in a cup fixture at Chelsea in 2008, featuring alongside one of the most decorated players in European and World football history.

"Xabi Alonso is up there with the best I've ever played with. Him and Gerrard in midfield were unbelieveable." 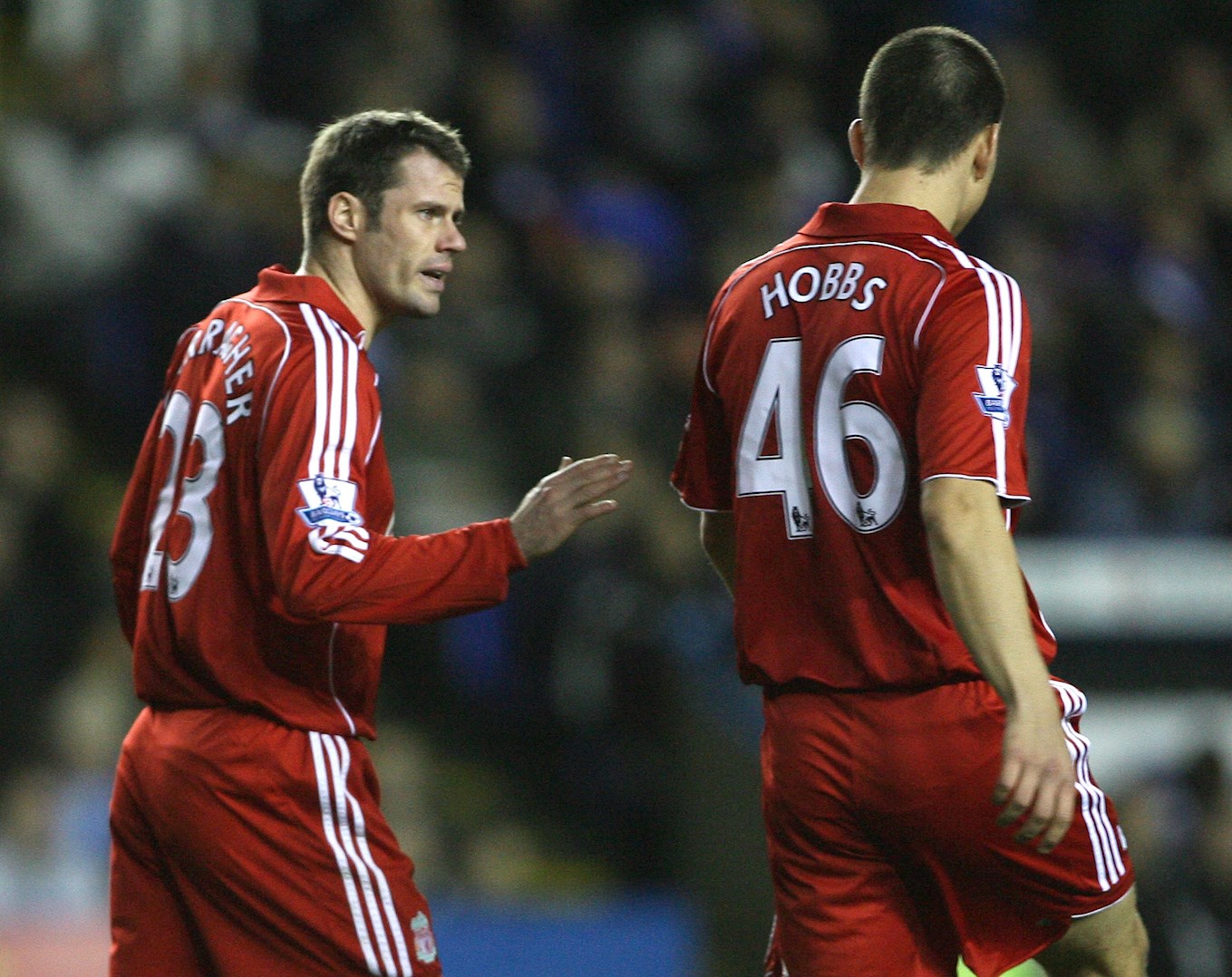 After a loan spell at Scunthorpe United, Hobbs signed for Leicester City on a season-long loan deal in the summer of 2008, which eventually became permament. Hobbs won the League One title with the Foxes and claimed numerous personal honours during the campaign.

"I think the timing was necessary (to move on from Liverpool). Liverpool brought in Skrtel and I wasn’t going to play much. The decision to leave was easy to make. I would’ve just been playing reserve football, which I had done for a few years previous.

"Leicester is a massive club, the facilities were brilliant. I was gutted to only have a handful of chances at Liverpool, but I was looking forward to the next stage and it proved to be a good decision in the end."

Hobbs spent a couple of years with the Foxes before earning Hull City their first promotion to the Premier League, and had a period with Nottingham Forest.

The central defender left Forest for his current side Bolton Wanderers in the summer of 2018. 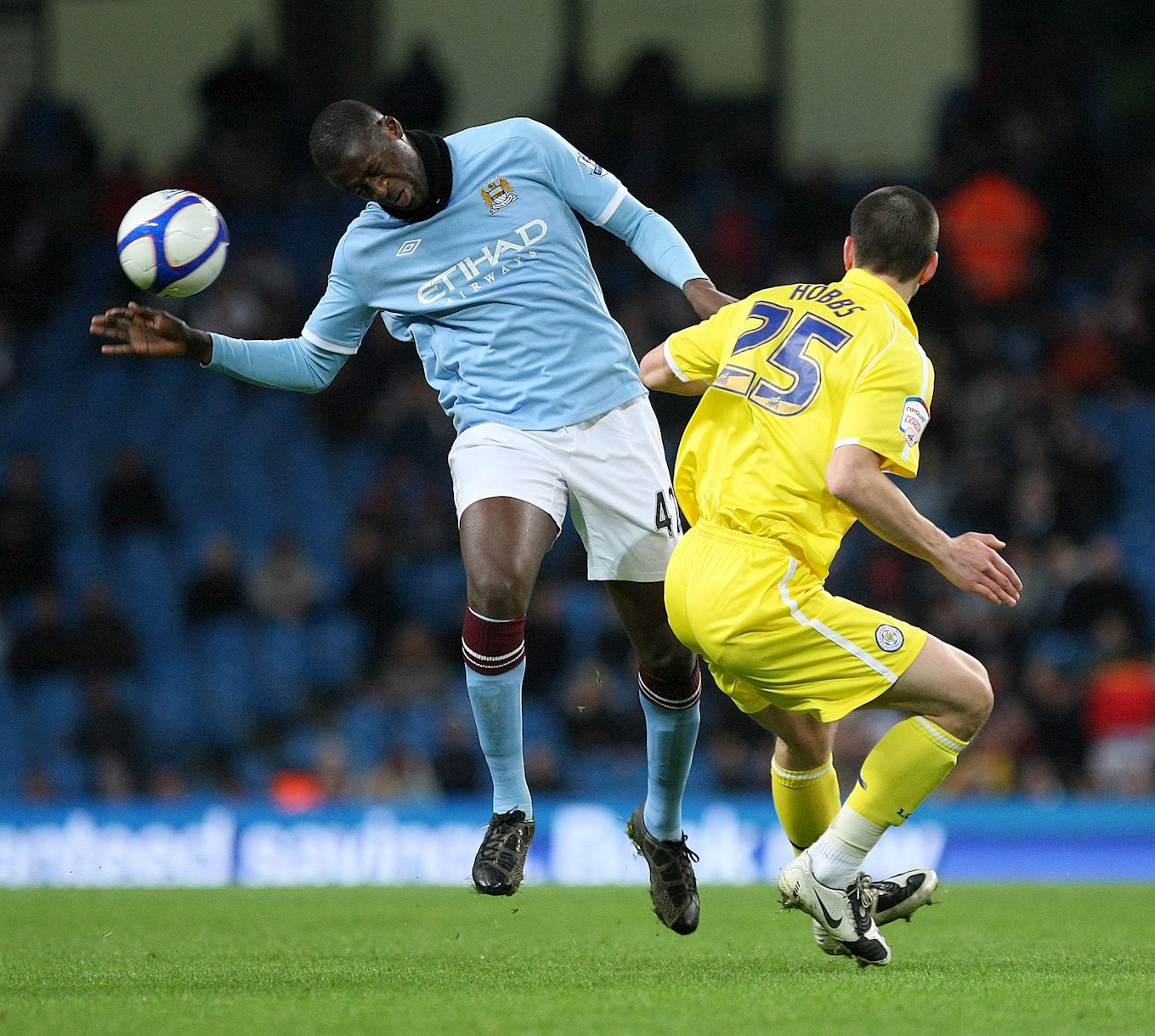 "I got on well at Bolton last season and I got really well looked after on a medical and Sports Science side of things. The size of the club is massive. You look at the stadium and it’s amazing. It’s a great place to play," he said.

"It’s been difficult times, but it looks like we’ve turned a corner now. Hopefully for the club in general it’s more of an exciting time now and hopefully a corner has been turned."

Despite visiting Sincil Bank for a friendly shortly after his move to Liverpool, Hobbs is yet to make a competitive appearance at Sincil Bank since his move away from the Imps.

Although an appearance is in doubt due to a recent injury, Hobbs has been impressed with City's recent progress on and off the pitch.

"I am delighted to see Lincoln back in the EFL," he added.

"Everyone at Lincoln from the outside looking in has a sense of optimism again. To be in League One and doing well is fantastic to see. It looks like the club is moving in the right direction. I’m sure the club will keep on moving forward and improving." 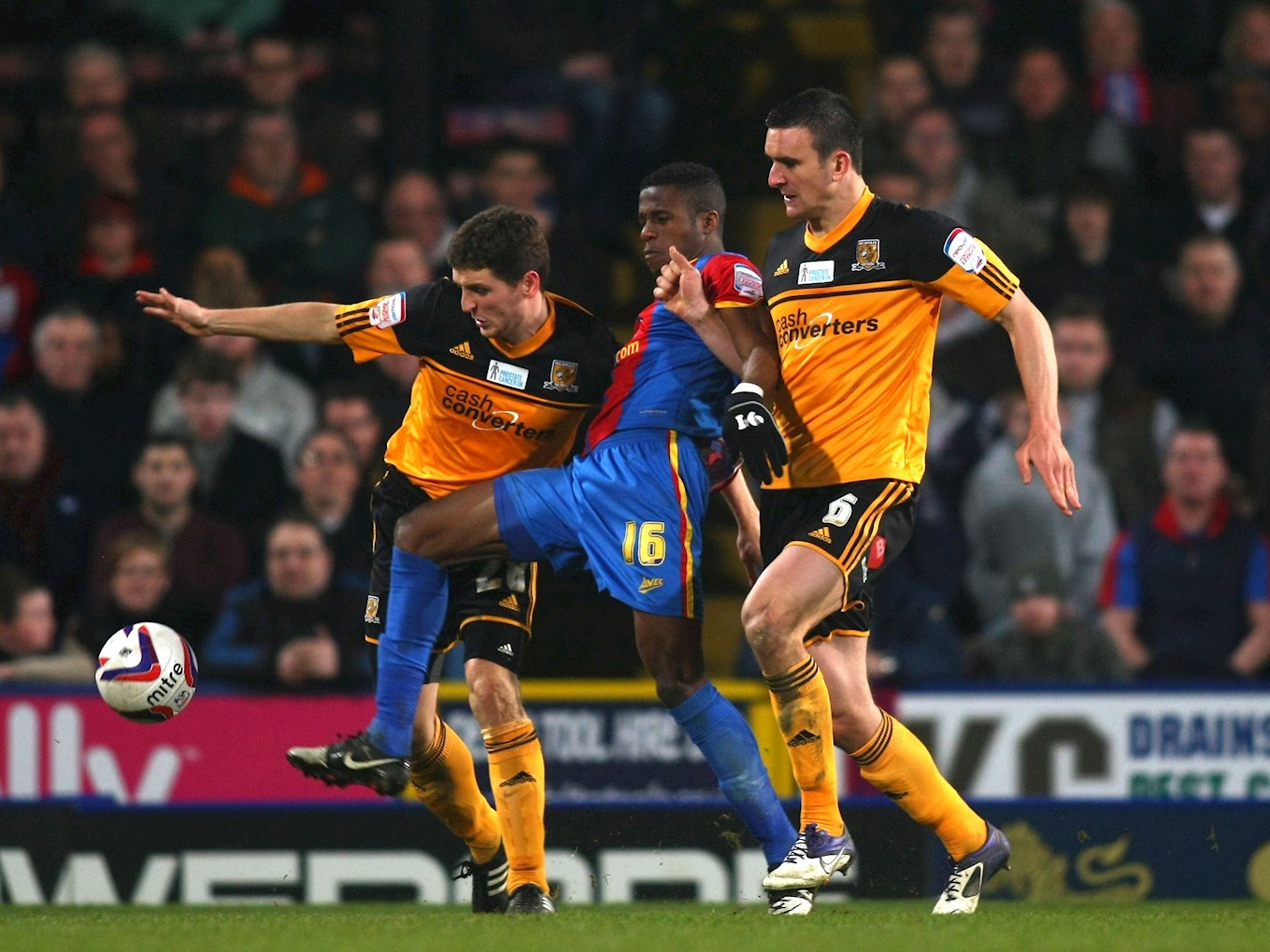 31-year-old Hobbs admitted he would go back to his Lincoln City days and tell teenage Hobbs one piece of advice.

Hobbs is arguably the most successful Lincoln City Academy graduate in recent years, alongside Darren Huckerby and more recently, Lee Frecklington, but Jack Hobbs is certainly a name that will remain in the Lincoln City history books.