Colchester United were to win on the final day of the season at Sincil Bank, the dismay of defeat was soon forgotten as The Imps lifted the SkyBet League Two trophy aloft in front of the highest attendance of the season. Three goals in the first half won the game for the visiting side, Brennan Dickenson and a brace from Sammie Szmodics were the names on the scoresheet but it ended with a celebration as over 9,000 City fans saw Danny Cowley’s squad finally get their hands on the trophy.

The Imps were led out by Matt Rhead and were welcomed by a guard of honour by their opponents, Colchester United. The wind was swirling around the pitch at Sincil Bank with the rain coming down just as the game got underway meaning conditions were difficult to say the least but he game started at breakneck speed.  The hosts won a free kick within 60 seconds of kick off, the ball was expertly played into the back post by Bruno Andrade and Cian Bolger nodded the ball back across with Mark O’Hara waiting, his effort though couldn’t beat the Colchester ‘keeper, Ethan Ross and was hurriedly cleared.

City were pressing high, pushing back the visitors and in wide areas were causing Colchester all sorts of issues, Andrade and Harry Anderson both getting the better of their opponents in the opening exchanges.  Colchester though were closest to taking charge of the game with just ten minutes gone, a burst down the right by Ryan Jackson ended with a cross from the full back over to the onrushing Mikael Mandron at the back post, his first time effort was well blocked by Josh Vickers, the ball rolled back to the U’s number 19 to have another crack but this time it looped high and over the top.

It was an open game as both sides were playing an expansive game, utilising the width of the Sincil Bank pitch resulting in an end to end spectacle as both ‘keepers were kept on their toes if not tested too much. The wind assisted a Rhead effort from distance a little too much as the shot carried over the top with Ross happy to see his goal remain unmarked for the time being.

As the end to end nature of the game continued, Sammie Szmodics showed good skill to create space to cross from the Colchester right, but found Harry Toffolo in the way, the resulting corner was lofted in and was met by Brennan Dickenson who headed home at the back post. The Imps looked to respond quickly, Rhead flicking on the ball which John Akinde laid to Anderson and he was clattered to the ground. Neal Eardley lined up the free kick and curled it over the wall but also just over the top with Ross making a vain attempt to get across goal.

Colchester were once again breaking off the back of a City attack, Szmodics hitting a low shot which Michael Bostwick blocked superbly but from the rebound, Jackson delivered a cross for Szmodics to race inbetween the Imps defenders and head home from close range.  The Imps were looking for a way back into the game, Akinde wrestling off the attentions of his marker before winning a corner.  Andrade’s centre caused panic as it bobbled around in the area but the away side were awarded a free kick with Rhead looking to pounce.

The visitors were close to getting a third ahead of half time and it was Szmodics’ movement causing problems, he advanced into the box with Courtney Senior backing him up, the Colchester number ten swivelling to shoot, the ball bounced past Vickers but also bounced off the post before Eardley cleared from almost underneath the crossbar. The visiting supporters were baying for more, but City weren’t giving up, Akinde worked the ball wide after holding off Tom Eastman and Andrade looped in a deep cross to Rhead but his header was off target. O’Hara was to force Ross into a stop as he met a looping Eardley centre, but it was to get worse for City as Szmodics made it three. He closed down a backpass towards Vickers, the City ‘keeper could only clear it straight into the midriff of the onrushing number ten and it left him with an unguarded net to roll the ball into.

The second half started quickly for The Imps as Rhead won a near post header, which Ross did well to save within the opening 40 seconds.  The Imps skipper, Rhead, then forced Ross into a punch to the edge of the box which Pett hit first time over the top. Frank Nouble was then involved at the other end as he hit a near post effort that struck the upright before bouncing to safety as the game continued to be end to end.

Shay McCartan was introduced for Rhead with ten minutes of the second half gone and he was immediately involved, winning possession and feeding Akinde but Eastman won the ball back before laying it back to Ross who inexplicably picked up the ball so it was an indirect free kick just six yards from goal for The Imps. A crowded goalline was enough to block the shot from the free kick as many appealed for a handball but play continued.

The game became a little bitty with niggly fouls being awarded to both sides meaning the flowing nature of the game had all but gone and chances were limited as a result, Mandron blasted over then Nouble did the same for the visitors with Eardley’s cross for the Imps being cleared by Eastman with Akinde close to getting on the end of it.

City kept plugging away, Jordan Roberts was introduced into the action for Akinde and was getting involved high up the pitch with play mostly taking part in the territory of the visiting side but chances were still at a premium. The Imps won what was to be their sixth corner of the game after Anderson was snuffed out around 3 yards from goal, but the set piece wasn’t capitalised upon.

Roberts almost clipped home a cross from Michael O’Connor but Ross was straight down the barrel to save, then it was the turn of Frankie Kent to keep City at bay as Andrade skipped away from his marker, bore down on goal and put the ball past the ‘keeper only to see the Colchester number six there on the line to turn the ball to safety.

The game slipped away as both sides’ fates were already decided with Colchester slipping out of the playoff spots due to results going against them elsewhere. It wasn’t a game to remember for City, but certainly an end to a season to remember as The Imps celebrated their championship with their supporters after the final whistle.


The Imps slipped to defeat for the first time in Skybet League One this season as Bristol Rovers came from behind to take victory. 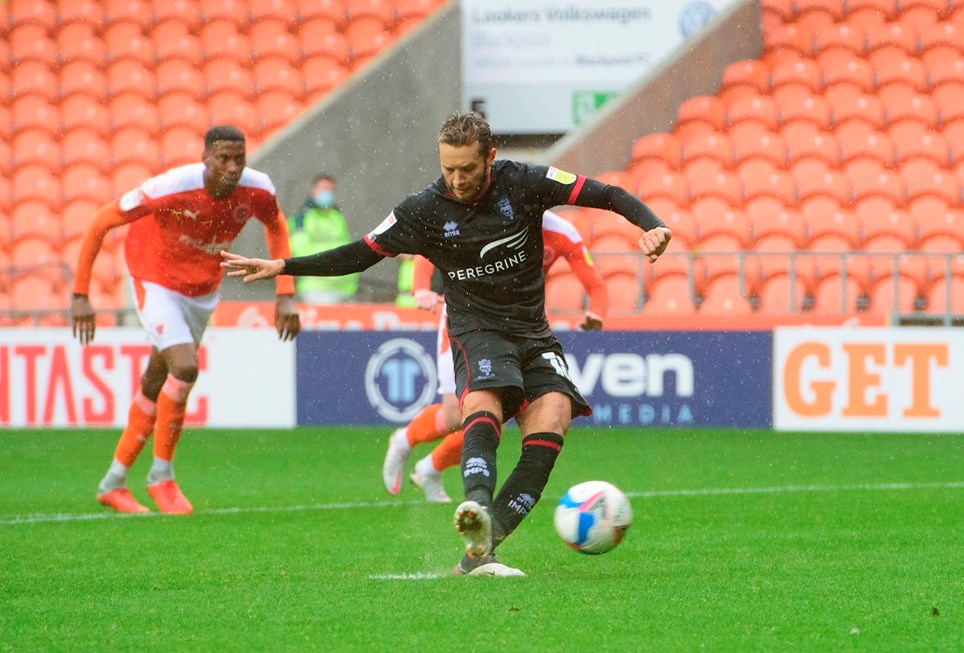 
It may have been an afternoon of damp and horrible weather out on the Lancashire coast, but The Imps lit up Bloomfield Road with two late goals to come from behind and take all three points.