The supporters got to see a thriller at LNER Stadium to round out the decade and the year of 2019 this afternoon, It was a game full of incident, goals and entertaining football in front of a sellout crowd which will be remembered for many a year.

The game against Ipswich was the first league meeting between the sides in over half a century, it was 1961 when Alf Ramsey brought a Tractorboys side to Lincoln action to square up against Bill Anderson’s Imps and the respective managerial legends would have been full of praise for both sides today.

City opened the scoring through Harry Anderson’s 5th of the season in the opening ten minutes, before Luke Garbutt curled home a tremendous leveller. However, Tyler Walker got The Imps back in front with a fine lobbed finish before the break. Ipswich were to draw level in the second half, with James Norwood claiming the goal but the scoring wasn’t done there as Walker netted his second of the game from close range. Michael Bostwick extended the City lead with just over ten minutes remaining but then sub, Will Keane reduced the deficit for the visiting side giving them hope but it was to no avail as The Imps made it FIVE in injury time through Jake Hesketh.

City’s starting XI remained unchanged from the side which took on Oxford United on Boxing Day, with the only change coming amongst the substitutes, Aaron Lewis replacing Tom Pett on the bench.

The Tractorboys made three changes from their side who took on Gillingham in their last outing, Luke Chambers, Flynn Downes and Andre Dozzell all coming back in ahead of kick off, with former Imp James Wilson was amongst their subs. 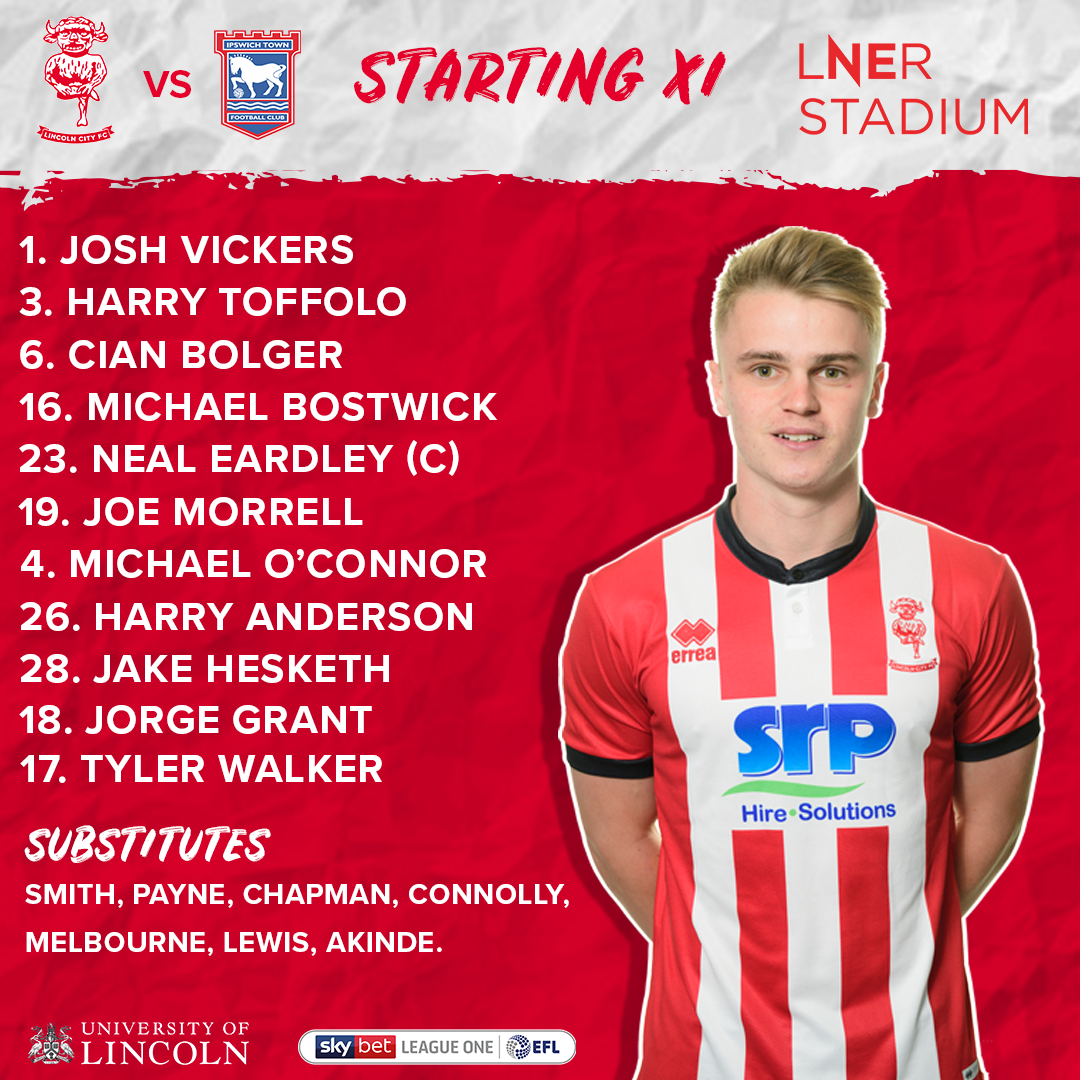 It was The Imps who were in the driving seat early on, with the energy of Jake Hesketh proving to be a thorn in the side of the visiting defence. The Southampton loanee’s turn of pace causing issues and it was a foul on the City number 28 which brought the first attempt of the game. The resulting free kick was played to the back post where Michael Bostwick leapt to head on target, but Will Norris was right behind the header.

City kept pushing for the opening goal and it was to come within the opening seven minutes, Tyler Walker causing problems led to HARRY ANDERSON being set free by Hesketh to race inside the box on the right before finishing with aplomb past Norris who had no chance.

The attacking intent from The Imps continued but the visitors were able to hold off the marauding home side and they had a first chance of their own as James Norwood tried to wriggle free in the box but Neal Eardley blocked the shot before the ball rebounded to Luke Garbutt but his effort went high over the bar.

Ipswich took heart from that first attack though and when Kayden Jackson tried to nip inbetween Cian Bolger and the onrushing Josh Vickers, the visiting fans behind the goal were appealing for a penalty but the referee indicated it was a perfectly timed touch from the ‘keeper.

The action was frantic, with The Imps the next to call Norris into action as Hesketh did well to find Toffolo in the left channel, the ball came back inside towards Jorge Grant who dummied the ball and it rolled to Joe Morrell who curled an effort on target only to see the Tractorboy’s custodian dive to his left and save.

City continued to threaten, Morrell setting Anderson away down the right with Walker, Hesketh, Grant and Eardley all getting up to assist the breakaway, the latter crossed into the area only to see Luke Chambers getting ahead of the Imps’ attacking trio in the box.

Ipswich began to throw more men forward, Gwion Edwards looked to get a shot away inside the City area but found Bolger and Toffolo throwing themselves in the way of the shot as the defensive pair showed total commitment to the cause. The visitors began a spell of possession in the Imps’ final third and were given an opportunity to test Josh Vickers as Andre Dozzell was brought down around 25 yards out. Luke GARBUTT stepped up and fired the set piece over the wall and beyond the despairing dive of Vickers to level things up.

The Imps kept looking to wide areas to fashion the next opportunity and some slick passing and movement down the right was looking likely to open the door, but the visiting side were just doing enough to halt City’s progress as they entered the final third.

Ipswich were struck a blow just before the break when Donacien was forced off through injury, Paul Lambert introduced Freddie Sears to the game with Edwards being forced to drop to right full back.

The Imps were a lick of paint away from getting back into the lead just before half time as Grant showed great awareness to curl the ball to the back post where Anderson was waiting, he raced in front Garbutt to toe poke the ball goalwards, beating Norris but it cannoned off the upright and bounced to safety. But just as supporters were thinking of getting in their half time refreshments, City were to get back in front and how! WALKER racing onto a through ball from Eardley to beat the offside trap and with Norris racing off his line the City forward looped the ball high over the ‘keeper and it dropped just below the bar and into the goal to send LNER Stadium into raptures.

City looked to race further ahead early in the second half, Toffolo made a perfectly timed tackle to halt an Ipswich attack, his challenge inadvertently was a very good pass into the path of Hesketh who fed Walker but his shot from outside the box went over the top.

The pace of the game matched that at the start of the first half and Kayden Jackson looked to get through onto a sliderule ball behind the City defence, Michael Bostwick was in the way and the visiting striker went down. The resulting free kick was hit by Garbutt but this time it wasn’t to ripple the Imps’ net.

In an almost immediate riposte City were back in the final third of Ipswich, Hesketh getting two bites at the cherry on the edge of the box, his second effort bringing the best out of Norris in the Town goal, who somehow managed to see the ball through a host of defenders in front of him to save.

Eardley was the next to get into the action, a smart touch, turn and pass from Walker into the path of the full back who took a touch before smashing a swerving effort but it curled away from goal and just out for a goal kick to the visitors.

The visitors were to level the game just ahead of the hour mark, a left wing corner was turned in amongst a throng of players in the box with NORWOOD claiming the final touch.  The visitors had a little purple patch with their supporters now thinking they were finally going to get ahead in the game but City were showing resolve, not buckling under pressure.

Michael Appleton’s side were showing heart and plenty of character to withstand the pressure and slowly crept further forward, the Tractorboys were being pushed back and were firmly on their heels when Morrell picked up possession around 30 yards out. The Welsh international drove forward, taking two players with him before squaring to the back post where WALKER was waiting and he made no mistake.

Michael O’Connor headed into the arms of the Town ‘keeper within seconds of the restart as the stands were absolutely bouncing in support of the home side.

The Imps had their opponents on the ropes and that was epitomised when City scored a fourth, Morrell crossing for BOSTWICK to bundle the ball into the goal at the back post. The goalscoring continued as Will KEANE pulled a goal back for the visiting side giving them hope but whilst they were hunting for their fourth, The Imps wanted a fifth and it was no more than they deserved, HESKETH finishing an incisive breakaway to put the game out of sight of the visitors.