The Imps still sit top of the Sky Bet League Two table after coming from behind twice to draw 2-2 against Carlisle United in front of a bumper crowd at Sincil Bank.

Lincoln made one change from the 1-1 draw against Cambridge United on Saturday with O’Connor replacing the suspended Ellis Chapman.

Nadesan’s shot hit Vickers but still found its way into the bottom right corner of the net.

The Imps hit back ten minutes later when O’Connor intercepted Adam Collin’s kick, knocked the ball over a Carlisle defender and beautifully smashed the ball past the keeper from 25 yards.

Lincoln then almost took the lead but Harry Anderson’s shot was smashed into the side netting.

Claims for a strong penalty appeal then followed when Shay McCartan’s cross adjudged to have hit the hand of Kelvin Etuhu, however referee Neil Hair waved away the protests.

Nadesan doubled his tally for the evening after Scott Wharton’s header back to Vickers was short and the Carlisle striker was able to pounce and slot the ball through the keeper’s legs.

Neal Eardley hobbled off not long after Carlisle’s second goal and was replaced by James Wilson.

The Imps came close to equalising again when Matt Rhead met Bruno Andrade’s corner, however his goal-bound effort was expertly headed off the line by Jack Sowerby.

Lincoln then grabbed their equaliser moments before half-time when Andrade’s free-kick eluded everyone in the box and slipped through the hands of Collin.

HALF TIME- The Imps 2-2 Carlisle United

Substitute John Akinde almost made an instant impact with some good hold-up play in the 18-yard box but his drilled cross was unable to find a red and white shirt.

Moments later Tom Pett threaded a ball through to Akinde and the striker unleashed a fierce shot which was well saved and pushed out for a corner by Collin.

Carlisle had a chance of their own mid-way through the second half Jerry Yates released a long-range effort, but Vickers was at hand to make the save.

Ethuhu then had a chance from 30-yards, but his shot blazed over the bar.

Campbell then came close to grabbing a late winner for the visitors when his shot from a tight angle fizzed across the face of goal.

The Imps had their chance to snatch a last minute winner but Akinde’s lobbed shot went over Collin’s head but cleared off the line by a Carlisle defender.

Play Off Match Report - Sunderland (A)


The Imps put in a stellar second half display to ensure they booked their place at Wembley in Sky Bet League One Play-Off Final versus Blackpool. The Imps fell behind to goals from Ross Stewart and... 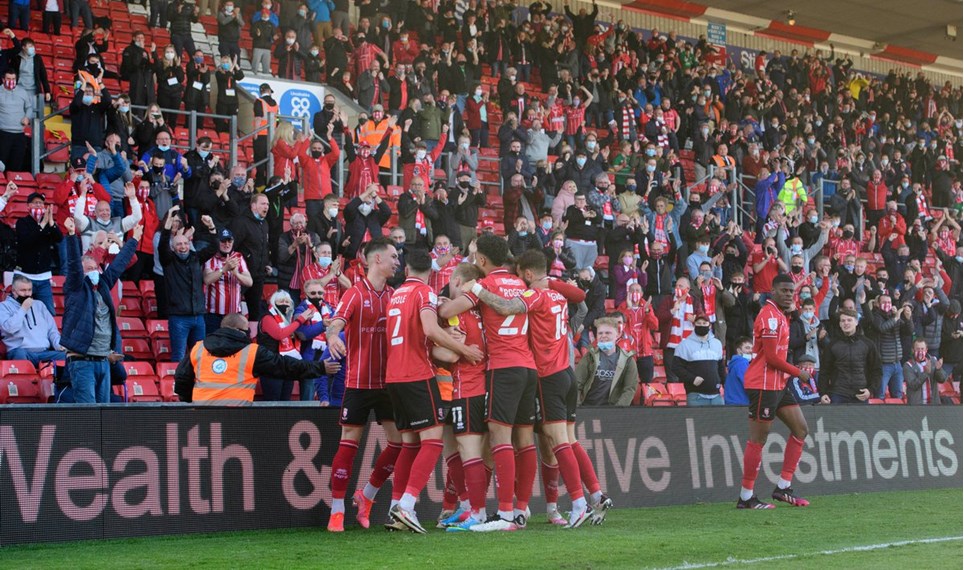 
Lincoln City put in a magnificent performance in the Sky Bet League One Play Off Semi Final as goals from Tom Hopper and Brennan Johnson ensured a 2-0 victory.


Lincoln City were held to a 0-0 draw at LNER Stadium by AFC Wimbledon. The Imps certainly had the better chances, but Nik Tsanev in the visiting goal ensured the away side picked up a point.