The Imps came from behind to taste victory in a rip-roaring encounter at the Abbey Stadium and rounded out 2018 with a six-point cushion at the top of Skybet League Two.

After going behind in the first half to a Jabo Ibehre header City had to show all of their skill, determination and resilience to taste victory at the Abbey Stadium, but it was all started with a moment of pure magic from Neal Eardley. The full back curling home a free kick into the top corner was the precursor for John Akinde to net the winner in front of the jubilant travelling contingent from Lincolnshire.

The Imps went into the final game of 2018 against The U’s with two changes to the side which took to the field against Crewe on Boxing Day. Matt Rhead and Grant Smith coming into the starting eleven, with Michael O’Connor and Josh Vickers missing out, however the midfielder did have a spot on the bench.

Backed by almost 2,300 travelling supporters the Imps’ got the game underway to a wall of noise coming from behind and to the left of Grant Smith’s goal.  The Imps were in the ascendency early in the game and almost took the lead through Harry Toffolo, the left back made a fantastic burst inside the U’s box and got his shot away but David Forde raced off his line to make a stop with his legs.

Colin Calderwood’s side were looking to hit City with pace, Reggie Lambe making a pest of himself down the Imps’ right but Neal Eardley was holding firm. The visitors however, were continuing to dominate the game having the majority of possession and spending quite the period inside opposition territory.  With just over a quarter of an hour gone, Eardley played the ball into Rhead, his touch to Harry Anderson saw the City man use his pace to get the better of two U’s defenders and cross, the ball just took a nick off Harry Darling but Bruno Andrade fed Lee Frecklington who smashed a low effort that Forde had to dive to save.

There was an immediate reply from the hosts however as they won a free kick just outside the box in a central position, Paul Lewis hit the shot low and true, it took a slight deflection off the wall and Smith did very well to save with his legs deflecting the ball out of danger. Cambridge were growing into the game and hit City on the break just before the half hour mark, Jabo Ibehre won an aerial battle in the centre of the pitch heading wide to Jevani Brown who raced down the City right despite the best efforts of Tom Pett to get back, Brown putting over a pinpoint cross onto the head of Ibhere whose precise header didn’t have much purchase on it, but had the requisite placement to just beat the outstretched arm of the diving Smith.

After weathering a brief storm, the game settled somewhat with a real battle ensuing as with both sides desperate to score the second goal of the game and it was reflected by chances at both ends of the field within a minute. Anderson took on four Cambridge defenders before Frecklington took over, his ball wide to Akinde gave the striker a chance to cross which he did low and hard but it was cleared and the home side broke at pace with Lewis ending the move with a shot that clattered off the crossbar before being cleared.

Akinde and Rhead were the next to threaten the goal, as the City striking pair linked up superbly on the edge of the box with the Imps’ top scorer sidefooting a shot which looked to be heading towards goal but it was blocked as it seemed to gather pace. Andrade then rattled in a teasing cross through a sea of legs which Forde did well to grasp first time as the visitors finished the half on the front foot.

There were no changes at the break for either side as City were now kicking towards their supporters looking for the leveller, the tempo of the game was as hot as ever and not looking likely to slow down.  Anderson’s running and effort was infectious and he continued in his attempts to drive City forward down the right but the threat shown by the home side in the opening 45 minutes was also still evident.

It was a real blood and thunder affair as both sides continued to show their commitment although chances had been at a premium, Anderson however was close to creating an opening for The Imps as a typical bursting run down the right ended with a cross that Forde had to grasp at the second attempt deep inside the box.

Akinde saw his route to goal blocked by two Cambridge defenders after Rhead won a flick on inside the U’s half before Cambridge bared their teeth in attack when David Amoo showed great skill to create the space to cross but Jason Shackell showed all his experience to get across the front of Ibehre to clear his lines and keep City in the game.

The home fans were baying for a second but were close to seeing their side pegged back as Akinde did so well to beat Brad Halliday to shoot, but the shot from the striker was off target before Anderson was brought down by Halliday giving City an opportunity to get the goal they so craved, and how they got it.

Up stepped EARDLEY to curl in the most delicious of free kicks right into the top corner of the goal from l giving Forde no chance whatsoever, as sumptuous a strike as you could ever wish for. 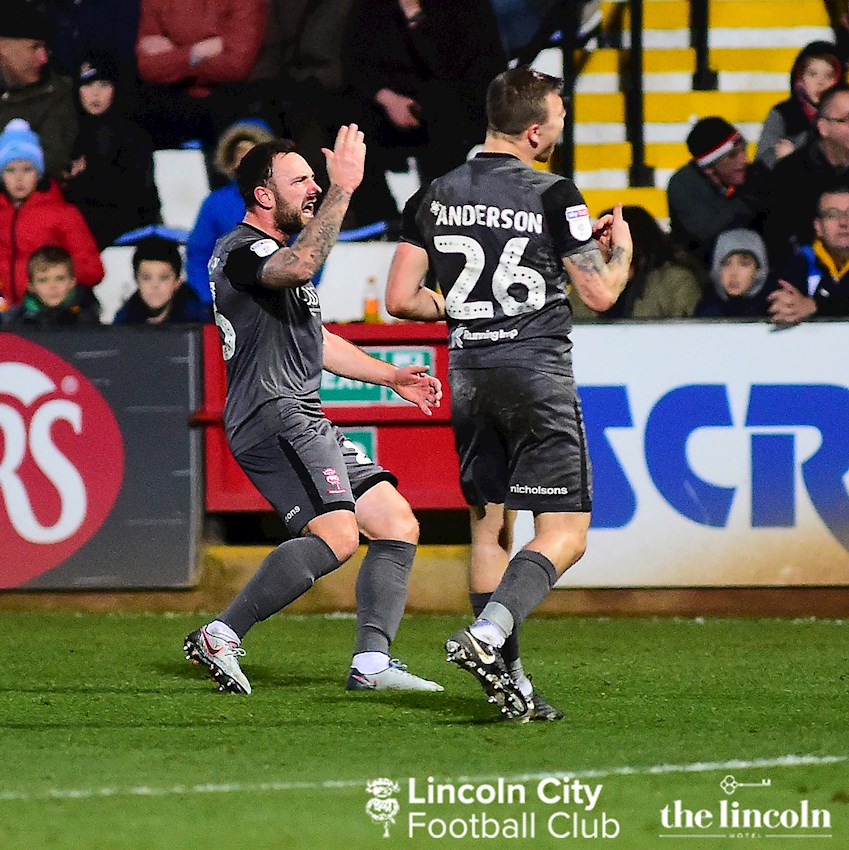 The Imps were now right on it, pressing forward with a renewed intensity and Anderson again was in the thick of it, using all his guile to cause all sorts of issues for the U’s defence as City were now the side looking the likely to take all three points and the third goal of the game was to go the way of the visitors within five minutes. Rhead did well to leap and win the ball in the penalty area and nod into the feet of AKINDE who somehow managed to hold off his marker, spin and get the ball beyond Forde and into the net, it was the striker’s eleventh goal of the season and just desserts for his efforts throughout the game to this point.

Despite falling behind, Cambridge were still looking dangerous as they continued to pour forward and Brown leapt highest to nod a Lambe cross just wide it left the home fans behind the City ‘keeper holding their heads in frustration as they thought it had sneaked into the corner.  The game opened up somewhat with the hosts having to search for the equaliser and after a real moment of pinball inside the City box where neither side could get control of the ball, it fell to Lambe who hit a howitzer of a shot from just inside the box and it was arrowing into the goal but Smith made the save of the game, diving to his right to save, arguably a save which was worth three points on its own.

Jake Carroll scraped the outside of the upright as he tried to repeat the feat of Eardley earlier in the game as things were deep inside what was announced as eight minutes of stoppage time and that was to be the closest the hosts came as the final whistle was met with utter jubilation from the travelling supporters, bringing a fitting end to a remarkable calendar year for The Imps.