City boss Danny Cowley made seven changes to his starting line-up for this Buildbase FA Trophy Third round tie against Welling United at Park View Road with Josh Ginnelly and Dayle Southwell both making their debuts.

The Imps were once again backed by a good number of travelling supporters as the teams were led out of the tunnel by referee Adrian Quelch and once the pre-match formalities were over Welling kicked off.

It was a scrappy opening with the first attempt at goal being a Ginnelly free-kick which was easily held by home stopper Chris Lewington before the Imps won a couple of corners, both of which coming to nothing.

City's bright start, however, paid dividends with just eight minutes on the clock when a defensive slip let in DAYLE SOUTHWELL who took a touch as he advanced towards goal before slotting the ball neatly past the advancing Lewington to get his spell with the Imps off to a great start.

Six minutes later a City attack ended with Jack Muldoon heading a Ginnelly cross over, but referee Quelch spotted a push by the former who needed treatment following a clash of heads before returning to the fray.

Shortly afterwards Muldoon released Ginnelly down the middle but he was denied by a superb Lewington save; the Welling keeper deflecting the ball behind for a corner which was headed over by Jamie McCombe.

A deflected Ward cross lead to another City corner as the Imps dominated the opening quarter of the game before a rare Welling attack ended with Pierre Joseph-Dubois heading a cross wide.

Left-back Terry Hawkridge picked up a 27th minute yellow card following a trip on Christian Nanetti whilst at the other end four minutes later a low Long cross was cleared out for a corner by Matt Fish. This corner lead to another as the Imps pressed for a second

Welling won their first corner in the 36th minute after Nanetti's shot was blocked by Hawkridge and a minute later there was a great chance for Ginnelly after he was released again by Muldoon but Lewington came quickly off his line to block.

Three minutes before the break Fish picked up a yellow card for delaying the taking of a City free-kick and after Ward won City's seventh corner of the half, the Welling full-back went in late on Southwell. It certainly looked a bookable offence but the referee was happy to give him a ticking off whilst speaking to skipper Sean Francis at the same time.


City were quickly out of the traps and within a minute of the restart Ginnelly broke down the left before Muldoon's flick set Southwell free. Once again Lewington kept the score down though with a fine block but it wasn't long before the Imps were pushing forward again and when Power released JOE WARD on the right he drilled powerfully past Lewington to double the advantage.

Two minutes later WARD drilled home again after exchanging passes with Muldoon to put the Imps' 3-0 to the good. It was most certainly a clinical start to the second half by Danny Cowley's men.

A lunge on Muldoon earned centre-back Rickie Hayles a deserved yellow card in the 54th minute and four minutes later Dan Walker for Pierre Joseph-Dubois was the Wings' first switch as they waited to take a free-kick.

When the aforementioned free-kick was taken, Danny Waldren nipped in and deflected the ball past Paul Farman to reduce the arrears. Bradley Wood then replaced Josh Ginnelly with the change seeing Sean Long move to left-back.

Ward was crudely blocked off the ball by Jordan Brown who picked up a 65th minute yellow card and two minutes later Adam Marriott replaced Dayle Southwell who had certainly impressed on his City debut.

In the 71st minute Hawkridge was penalised for a foul a foot outside the City box but Adam Coombes fired the free-kick straight at the wall whilst at the other end Muldoon was tripped by Fish but the City number seven was booked by the referee for diving!

Substitute Marriott dragged a low effort wide of the target before a great run forward by Ward saw him create space but the final effort from Hawkridge went well wide.

As the game entered its final 10 minutes Whitehouse was upended in the Welling box but instead of awarding the Imps what looked to be a clear-cut penalty referee Quelch books the City man for simulation. With manager Danny Cowley still shaking his head in disbelief, McCombe was booked following another harsh decision against the Imps.

Both teams then made changes with Jamie Slabber coming on for Sam Hatton for the hosts and Sean Raggett replacing McCombe for City and as the final minute and four added minutes approached the overlapping Wood forced a corner on the City right but the set-piece came to nothing.

The only other action of note before play came to a close was in the form of a cross-field pass from Ward which found Marriott who was denied superbly by the feet of Lewington, who by some distance was the home side's man of the match. 
Lincoln City strengthened their position in the play off places with another hard earned 1-0 victory away at Burton Albion. TJ Eyoma's first half header was enough to separate these two sides as the... 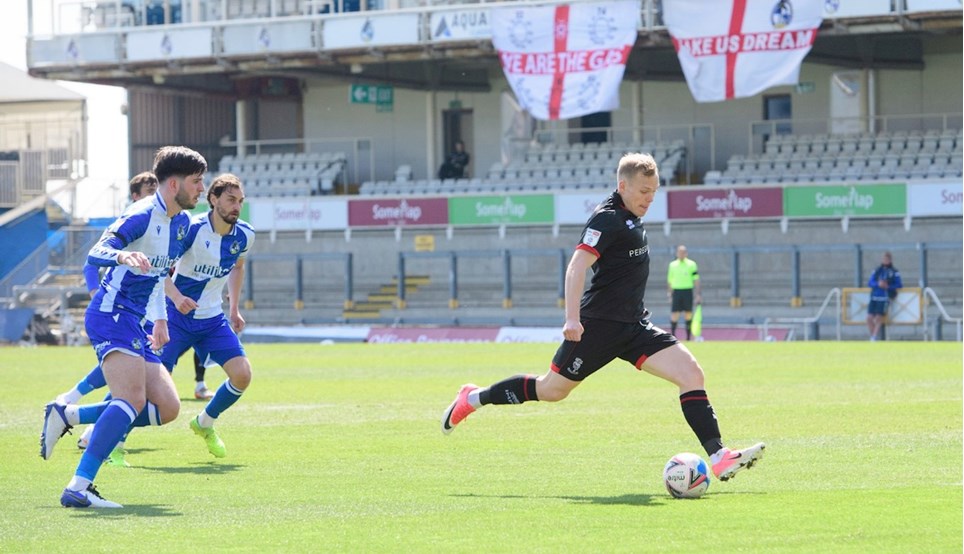