Elliott Whitehouse and Callum Howe came in for Alan Power and Jamie McCombe as second-placed Imps welcomed first-placed Tranmere Rovers to Sincil Bank Stadium for what promised to be a real pre-Christmas cracker in the December sunshine.

There was a fantastic atmosphere inside the stadium as the teams were led out by match referee Craig Hicks and once the pre-match formalities were done and dusted City kicked off attacking the Stacey West Stand.

The Imps were quickly out of the traps and won an early free-kick following a trip on Alex Woodyard and this led to the first corner of the game but the visiting defence scrambled the ball out for a throw-in.

Sam Habergham launched the ball into the mix from the third-minute throw and after it was flicked on by Matt Rhead there was NATHAN ARNOLD to head past an exposed Scott Davies to send the home fans into raptures.

Tranmere's first attack came in the ninth minute and saw James Norwood latch on to a through ball down the middle but after initially rounding Paul Farman the striker was denied by a find covering save by the City stopper.

Three minutes later a high boot on Woodyard earned Lois Maynard a ticking off from the referee who decided to keep his cards in his pocket and shortly afterwards a low drive from Whitehouse was held at the second attempt by Rovers 'keeper Scott Davies.

Rhead was clattered by ex-Imp Jeff Hughes in the 18th minute and was left clutching his face before he was treated by Mike Hine and when play resumed an awful clearance from Ritchie Sutton went straight over his own bar and out for what turned out to be an unproductive City corner.

With the half-hour mark fast approaching there was drama at the other end when Andy Mangan went across Howe before going to ground in the box. Referee Hicks took his time before awarding Rovers a penalty, much to the disbelief of the City players who felt the Tranmere man took a dive.

Once things calmed down Hughes sent Farman the wrong way from 12 yards to level matters. The City squad were still questioning the referee before play restarted.

Seven minutes after this set-back Rhead was left grounded following a late challenge from behind by left-back Liam Ridehalgh. Referee Hicks didn't even speak to the offender with Rhead once again needing attention before resuming duties.

A mistimed challenge by Terry Hawkridge on Jay Harris earned him a very harsh yellow card, especially considering some of the tackles earlier in the game that went unpunished.

No changes were made as Tranmere restarted proceedings and there was an early break in play as Ben Tollitt came off worse in a 50-50 challenge with Bradley Wood on the City right.

A Tranmere corner was claimed at the near post by Farman six minutes after the restart and in a bid to inject some fresh impetus Harry Anderson replaced Terry Hawkridge four minutes later, just after Rhead was left grounded following a meaty tackle by Steve McNulty.

After City won a corner play switched to the ther end with Norwood going to ground very easily in the box. With nothing given, Rhead released Robinson who rounded Davies only to see his effort clip a covering defender and go out for a corner.

It was end-to-end blood-and-thunder stuff for the 6,335 supporters to watch and the majority were on their feet again when Robinson was blocked off the ball by McNulty in the box. Nothing was given though and Rovers' Jake Kirby came on for Jay Harris shortly afterwards.

In the 71st minute Anderson picked out Robinson who headed wide of the target whilst three minutes later Farman held a Sutton header following a deep Hughes corner. At the other end Robinson lobbed Davies but also the bar and the game remained all-square.

There was a 79th minute yellow card for Ridehalgh after he kicked the ball over the Stacey West roof following an offside decision against Rovers.

Adam Marriott replaced Theo Robinson shortly afterwards and this change paid immediate dividends when, after Arnold and Rhead combined, MARRIOTT took a touch before firing clinically past the advancing Davies to put the Imps back in front.

Marriott was booked, presumably for celebrating his goal, before play resumed whilst an incident amongst the visiting dugout saw Rovers' number two Michael Jackson go nose to nose with the Fourth Official before referee Hicks stepped in and calmed things down.

Hughes blazed a free-kick from the edge of the City box well over the bar before five additional minutes was indicated shortly after Anderson skinned his man before being crowded out in the box.

After the five minutes were up, Jamie McCombe replaced Matt Rhead, who got booked for taking too long to leave the pitch. Play continued into the 97th minute with Mangan fizzing a low drive inches wide and he was subsequently booked for over requesting a corner. Farman then joined him for taking too long over the goal kick.

The whistle eventually went with Sincil Bank in raptures as the Imps welcomed in Christmas top of the Vanarama National League pile. 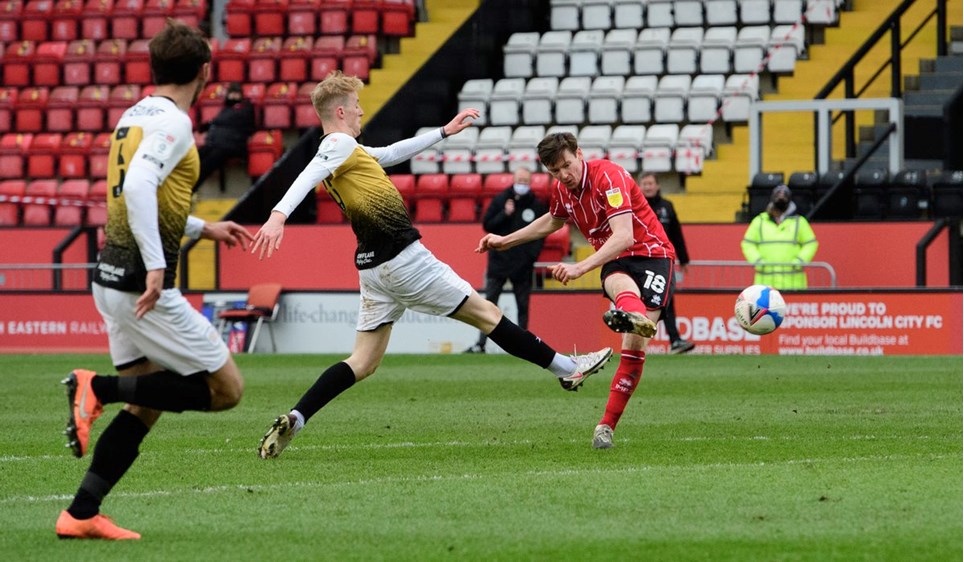