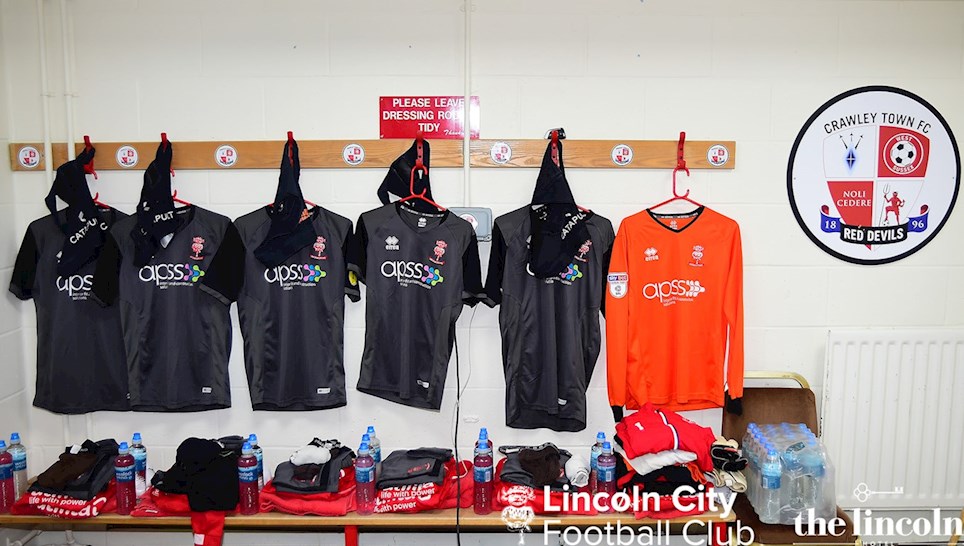 
The team news is in at the People's Pension Stadium and Danny Cowley makes one change to the side which started in the draw at Mansfield Town on Monday evening.

The Imps strengthened their grip on the automatic promotion places after a convincing performance against Crawley Town at the People’s Pension Stadium.

Goals of sumptuous quality, in respect of the delivery or the execution were the order of the day for City. Bruno Andrade put the visitors into the lead in the first half, before Shay McCartan scored another goal of the season contender and last but no means least, Cian Bolger nodded home his first in City colours to round out the scoring.

Tom Pett started the game in place of Michael O’Connor who was on the bench, alongside the Northern Irishman was former Red Devils’ player Jordan Roberts, potentially facing his old club for the first time since he left the People’s Pension Stadium for Ipswich Town at the end of last season, one of three City players who used to line up for Crawley Town. Meanwhile, there was a familiar face in the Crawley line up, striker Ollie Palmer, who of course moved south to the Red Devils from Sincil Bank.

City got the game underway with the travelling supporters behind Matt Gilks’ goal, starting with a real purpose, attacking down the right and left in the opening minute of the game and forcing Glenn Morris into a tricky claim with Danny Rowe in close attendance.  Just 120 seconds later the first goal of the game was inches away from going The Imps’ way, Harry Toffolo putting in a lovely cross and John Akinde rose above Bondz N’Gala looping a header back across goal but it dropped just over the top.

Crawley managed to resist the early City pressure and Panutche Camara tried a cheeky curled effort against the run of play from around 25 yards but Gilks caught the ball with relative ease before The Imps’ were back in relative control, although the chances weren’t coming as freely with the home side tightening up in defensive areas.

Crawley visibly grew in confidence as they were limiting the visitors opportunities and were dangerous on the break, Lewis Young in particular showing a real turn of pace to burst past Michael Bostwick then fire a low cross into the area which skipped right through the middle of the box and out of danger.  Things were getting a little tetchy and the referee spoke to players from both teams as the deadlock just couldn’t be broken.

Palmer bundled his way into the Imps’ area before winning a corner, but before the home fans could think of opening the scoring City broke very quickly but couldn’t get around the back of the home defence as Rowe was adjudged to be just offside as Toffolo cut the ball inside to the edge of the area from the left flank. It was arguably a microcosm of the majority first half to this point; as the final ball continued to elude both sides when getting into dangerous positions.

However, that all changed with just under ten minutes to the break when Neal Eardley delivered a pinpoint curling ball from the right onto which Bruno ANDRADE met with impeccable timing, turning the ball home beyond Morris and into the goal for his tenth goal of the season. Eardley then was close to creating another goal for City with a typically dangerous cross which was met by Rowe but he just got ahead of the ball and couldn’t wrap his foot around it to direct it goalwards.

Palmer did well on the edge of the area for the hosts, holding off the attentions of Cian Bolger before smashing a low shot which Gilks had to save down low to his left, the City ‘keeper doing well to hold onto the ball as it skipped off the turf in front of him. Play returned to the City attacking third as Mark O’Hara showed good movement to run onto a low free kick, he jinked inside his marker and shot, it looped off a defender and just over before Bolger then forced Morris into a save on the whistle, the centre back connecting with a corner from Rowe, his header though was comfortable for the Red Devils’ stopper to save underneath his crossbar.

Both sides remained unchanged as the second half got underway, and City were the one making the all the running kicking towards their bank of 1,000 or so supporters behind the goal. Anderson had two attempts to cross before being brought down on the right-hand edge of the penalty area, Rowe stepped up to hit a curler aiming for the far corner but it went over the top. Then Andrade almost broke free round the back after winning a battle with Joe McNerney on the left, but the Crawley defence just did enough to nullify the Imps’ goalscorer. City’s number eleven was brimming with confidence, ghosting past two challenges before shooting the ball was blocked as it looked to be heading goalwards, Anderson looked to pounce but he was just forced wide and his effort rippled the side netting.

The Imps were threatening the home defence with an alarming regularity from a home point of view, Akinde was brought down by N’Gala as the striker tried to get away down the right flank but Rowe’s free kick was just too long.  The number 19 was then brought down after Akinde took three defenders with him, the set piece was awarded to City around 25 yards out which Rowe and Andrade lined up, the latter curled the ball over the wall but it also crept over the frame of the goal as the onslaught in the opening ten minutes of the second half continued. Rowe headed a right wing cross from Anderson over the top and The Imps almost rued that missed opportunity when Reece Grego-Cox showed great skill to turn away from Eardley and feed Palmer, he laid the ball back and Camara tried a shot but Toffolo was there with a perfect block.

Bolger was to be denied by Morris, the ‘keeper saving the defenders header at the back post from Tom Pett’s precise corner before the home side tried again,albeit in vain, to level as Grego-Cox’s left wing cross was overhit and it went close to sneaking in at the back post although Gilks was confident enough to let it go by. The City ‘keeper again was showing all his experience when Camara broke free to fire a shot towards his goal, the ball always rising and Gilks let it go over the top.

Shay McCartan off the bench to replace Rowe created the next chance for the visitors, turning his man on halfway and wrestling his way clear of another challenge before feeding Anderson who let a shot go that went over the top. But McCARTAN was to not let the fans disappointment of the chance linger as he scored a wonderful second for the Imps, taking control of the ball inside the Red’s half, skipping away from two challenges, striding into the box and calmly stroking the ball home.

McCartan then almost created a third for City with just as sublime skill out wide on the left, Lewis Young was left flatfooted by the Imps’ number 17 who got to the touchline and pulled the ball back but N’Gala cleared.  The third goal wasn’t long in coming though and it came from a set piece, Pett delivering a ball to the back post where BOLGER was in acres of space, unmarked, to measure his header into the corner.

Crawley almost pulled a goal back in stoppage time when Tom Dallison met a Young free kick at the back post, his header beat Gilks but Michael Bostwick was there to clear from under the crossbar and ensure The Imps went back to Lincolnshire with all three points and a clean sheet.


The team news is in at the People's Pension Stadium and Danny Cowley makes one change to the side which started in the draw at Mansfield Town on Monday evening.

Please find below the ticket and travel information for our upcoming fixture against Crawley Town on Saturday March 23rd in SkyBet League Two at The Peoples Pension Stadium.

The main Eventbrite ticket sales page can be found HERE

The Eventbright page for the travel sales can be found HERE