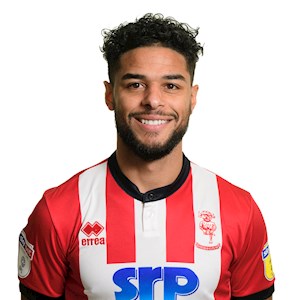 In On Loan
From Nottingham Forest

Home and away kit sponsors: The University of Lincoln

A product of Chelsea’s academy, Bridcutt has a wealth of experience arriving at LNER Stadium on loan from Nottingham Forest on deadline day.

The 30-year-old made over 130 appearances during a four-year spell with Brighton & Hove Albion. It was a period in which he also won back-to-back Player of the Season awards during his time with the Seagulls and made his debut on the International stage for Scotland in their qualifying campaign for the 2014 World Cup against Serbia.

After impressing on the South Coast, Liam then made the move to then Premier League side, Sunderland in January of 2014.

Following his stint with the Black Cats, he joined Leeds United, initially on loan a deal which the Elland Road club then made permanent in the summer of 2016.

It was during his time at Leeds that Liam added another international cap to his tally, playing against Denmark. He was to join Nottingham Forest in August 2017 and has so far played over 30 times in his time with the club.

Bridcutt had previously spent time on loan with Bolton Wanderers earlier in the season.