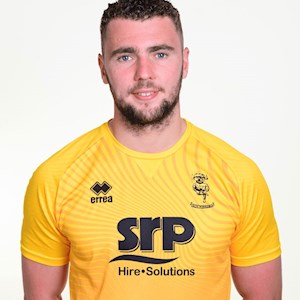 Out On Loan
At Boreham Wood

Home and Away Kit Sponsors: The University of Lincoln

The 25-year-old goalkeeper started his career with Reading and Fulham U18’s before signing for Brighton & Hove Albion in July 2012. After two seasons with the Seagulls, Smith signed for non-league side Hayes & Yeading in 2014.

After just one year at Beaconsfield Road the goalkeeper was on the move again, this time signing terms with Bognor Regis Town after a trial with Crystal Palace.

During his time at Nyewood Lane, Smith helped guide the side to the FA Trophy semi-final during the 2015/16 season.

A move to Boreham Wood followed with Smith becoming an instant him with the fans.

He started over 100 consecutive games for The Wood, which included every match in the 2016/17 and 17/18 season where Luke Garrad's side reached the National League Play-Off Final.

Prior to his move to Sincil Bank, the shot stopper had featured in the England C setup, playing against Slovakia in the International Challenge Trophy Final. Smith spent time out on loan during the 2018/19 campaign making five appearances for Maidstone United before being recalled in December 2018.