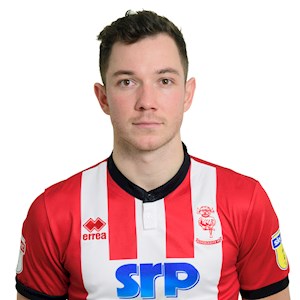 Tom joined The Imps from Southend United in January 2020, signing a three-and-a-half-year contract.

The Lincolnshire born striker started his career with his hometown club, Boston United, in his teenage years and still holds the record for being their youngest ever outfield player at the age of just 15. Following his breakthrough at The Pilgrims, he moved to Leicester City where he featured three times in cup competition before heading back North on loan with first Bury and then Scunthorpe United.

His temporary spell with The Iron became permanent in 2015 and he scored 23 times before moving to Southend United in the summer of 2018. He netted ten times for The Shrimpers in 30 appearances ahead of his move to The Imps, Tom made his City debut as a second half substitute at Portman Road against Ipswich Town in late January.