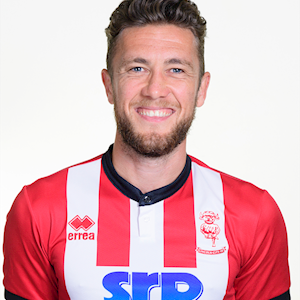 The experienced defender arrived at Sincil Bank in August 2019 following a six-year spell with Southend United.

After coming through Cambridge United and Northampton Town’s academy setups, Coker turned out for non-league sides Histon and Barton Rovers before signing for Swedish side Ånge IF in 2008.

On his return to England, the 30-year-old sign for Bury Town where he spent two-years before joining Colchester United. A number of loan spells featured for the defender during his time with The U’s with Chelmsford City and Histon.

Coker then signed permanently for Histon in 2013 before securing a move to the Football League with Southend a year later.

The defender was selected for the 2014/15 PFA League Two Team of the Year as United secured promotion to League One through the play-offs.

Coker made his Imps debut in a 3-0 win over Rotherham United in the Leasing.com Trophy at Sincil Bank.