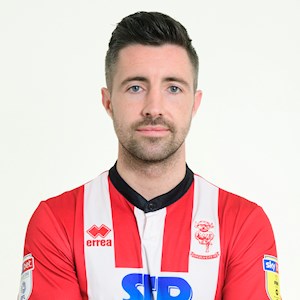 Alan initially made his breakthrough in English football by joining Leicester City in 2003 after they spotted him playing for Irish side, Belvedere. He soon settled with The Foxes and after making an impression with the academy side of the then Championship club, Alan made his debut for The Foxes on the final day of the 04/05 season against Plymouth Argyle. Then aged just 18, he was awarded the accolade of Academy Player of the Year.

Sheehan played just under 30 times for Leicester before departing for Leeds United, initially on loan in 2008, before moving to Elland Road on a permanent basis. Following his spell in West Yorkshire, Alan can also name Swindon Town, Notts County, Bradford City and Luton Town as his former employers as well as featuring in loan spells with Mansfield Town, Crewe, Oldham Athletic, Peterborough United and Notts County.

The vastly experienced 33-year-old Irish defender left Luton Town at the end of January following the expiration of his contract with The Hatters. Alan featured over 100 times for the Championship club in a four-year spell at Kenilworth Road before joining the Imps.