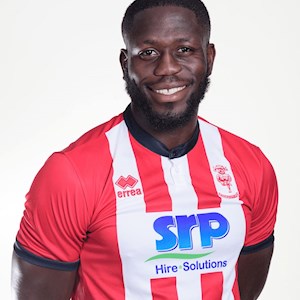 Prior to his move to Sincil Bank, the striker had made a name for himself with Barnet, playing over 150 games in four years.

Akinde started his career with Gravesend & Northfleet, who became Ebbsfleet United in 2007. The striker experienced two loans early in his career, the first to Margate and the second to Whitstable Town.

In 2008, he signed for Bristol City, scoring on his debut in a 2-2 draw against Plymouth Argyle. Five loan spells followed for the forward to clubs such as Wycombe Wanderers, Brentford and Bristol Rovers.

Between 2011 and 2013, Akinde turned out for Crawley Town and Portsmouth, both on a permanent basis after leaving Bristol City.

However, after departing Fratton Park in 2013 he started to get first team football on a more regular basis with Alfreton Town. In April 2017, Akinde became Barnet’s highest-ever League goal scorer when he scored his 48th Football League goal in a 2-0 win over Hartlepool.