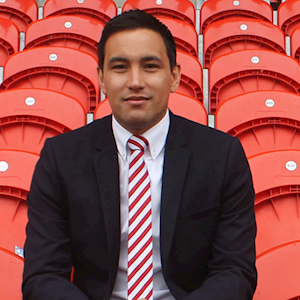 Liam joined Lincoln City in August 2017 after a distinguished career with Doncaster Rovers where he held numerous roles including a stint as Foundation Chief Executive before moving taking up office as Chief Operating Officer of the Club Doncaster Group.

Liam has gained over 18 years’ experience of working in football, having first entered the sport via an apprenticeship funded by the PFA. Since then Liam has worked through the ranks in various roles, which culminated in Liam being inducted into the National Apprenticeship Hall of Fame in 2007. The Hall of Fame recognised outstanding achievement in enterprise and business from those who started off their working life through an apprenticeship scheme.

Liam is a keen adventurer and charity fundraiser and lists his finest personal achievement as completing the 7-day Inca Trek to Machu Picchu (Peru) where he also raised over £75,000 for the NSPCC.