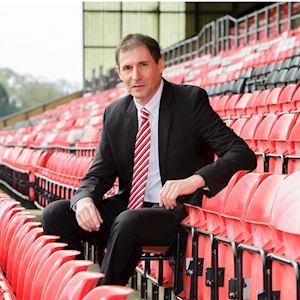 Lincoln City Chairman Clive Nates joined the board in February 2016 and was elected Chairman in June 2018. Through Sportvest Capital LLP, a vehicle Clive formed with Sean Melnick and Aschley Mendelowitz to specifically invest in Lincoln City Holdings, they effectively hold the largest interest in the club.

Although Clive has lived in South Africa all his life he has been a keen follower of English football from a child and in particular a passionate fan of Everton since the late 1960’s. It was through an alliance between Everton and Lincoln City in 2002 that Clive began following the Imps.

Clive has been a regular visitor to the UK, even before his formal interest in Lincoln City, having seen both of his children study at English universities as well as to regularly watch his favourite football teams.

Clive qualified as a Chartered Accountant and worked in the auditing profession until moving into asset management in the late 1980’s. He progressed to become Head of Research and a Director of the investment arm of the Liberty Life Group. In 1998 he was presented with an opportunity by the financial services group Peregrine Holdings to co-found the first hedge fund management company in South Africa. He remains a non-Executive Director of Peregrine Capital, a company he was first Managing Director and then Chairman until his retirement from day-to-day involvement in 2011.