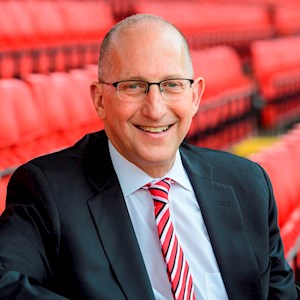 Jabara holds a Bachelors Degree in Accounting from Arizona State University where he graduated in 1988. In 2005, the W.P. Carey School of Business at Arizona State granted him the Distinguished Achievement Award. He has been involved in a variety of professional endeavors including the Advisory Board of Lovell, Minnick Private Equity Partners II, a private equity fund affiliated with Los Angeles, California-based Lovell, Minnick Partners. In April 2009, Jabara and his wife, Missy, and their two sons became a minority owner of the San Diego Padres, a Major League Baseball Club. In June 2021, Harvey and his family became shareholders of Lincoln City Football Club, a member of the English Football League One.

Jabara has served as a member of the Arizona State University College of Business Dean’s Council, as well as the Phoenix, Arizona-based Helping Hands for the Homeless Advisory Board. For ten years, he served on the Board of Trustees of Newman University, a private four- year Catholic institution located in Wichita, Kansas and is a former Chairman of the Board at Newman. Jabara served on the Steering Committee of the Wichita Prayer Breakfast Fellowship and as a member of the St. George Orthodox Christian Cathedral Endowment Foundation Board. Previously, he also served on the Board of Directors for Junior Achievement of Wichita, Inc.

In addition to his investment management responsibilities for Olive Management, Jabara serves as a board member for the Harvey and Missy Jabara Family Foundation, founded in 1999 by Harvey and his wife, Missy. For over twenty years, he served as a trustee of the Fran Jabara Family Foundation, Inc. From 1991-2006, Jabara was a principal in VE2NTUREKIDS, founded by Fran Jabara, a program designed to teach elementary-school aged minority students the concept of entrepreneurship and the value of education.

A native of Wichita, Kansas, Harvey Jabara and his wife Missy are the parents of two sons, Jaxon (22) and Jensen (20), are members of St. George Orthodox Christian Cathedral and reside in the greater Phoenix area.