Sunday’s game will be available for Imps supporters to watch LIVE on WeAreImps iFollow. To get involved and see the game unfold, buy your WeAreImps match pass HERE for just £10.

Lee Bowyer's side faced Doncaster Rovers in their last game. Charlton suffered a 3-1 defeat with Rovers leading 3-0 in the 63rd minute, former Imps' loanee Tyreece John-Jules was on the scoresheet scoring his first  goal in a Doncaster shirt.

Northern Ireland international Conor Washington managed to get a consultation goal for Charlton just before the 70th minute, bringing his league tally to two goals in two games.

The Charlton boss spoke to press ahead of Sunday’s clash and is hoping to see improvements from his side's last performance.

"What drives me crazy is that we created chances against Doncaster, but we didn't take them," explained Lee.

"I said to the players after the last game, it should have been 4-4. We didn’t defend well and we didn’t take our chances again. It's frustrating, very frustrating.

"Goals win games and if you don’t take your chances and do the right things in the right areas, you don’t win games. That’s the difference. You do work all week and then you play like that and make mistakes like that."

Following the departure of Lyle Taylor to Nottingham Forest in the summer, Charlton have recruited known goal scorer Conor Washington.

The 28-year-old has had a fairytale journey from Non-League football where he featured for St Ives Town between 2009 and 2012. Washington signed for Newport County in 2012 before moving to Peterborough United. The forward then moved to Championship side QPR in 2016 before signing a deal with Sheffield United two years later.

Following a brief spell with Scottish side Hearts, Washington arrived at the Valley over the summer. He scored on his Charlton debut when they beat Crewe 2-0 in Sky Bet League One action. Washington added a second to his Athletic tally in as many games when facing Doncaster Rovers last weekend.

Hady Ghandour and Lucas Ness have also arrived at the Valley, both coming from non-league clubs.

The other notable name Bowyer has signed this summer is 25-year-old midfielder Alex Gilbey who arrived at the club from MK Dons. The midfielders started his career with Colchester before also featuring for clubs such as Newport County and Wigan Athletic.

The Imps boss spoke about his side’s performance after the game: “We can take lots of positives away from the game.

“In the second half we came out and gave them a game. We had some great chances and should have scored more if I’m honest. We showed great character, I didn’t have too much of a concern.

“These games are great to get a better understanding of the group because it is still early days. The lads were brave and really good in the second half against a fantastic Liverpool side.”

Appleton also spoke about Callum Morton who didn’t feature in the game saying: “He’s had a scan and we’re awaiting the results.”

The City manager finished by speaking about Sunday’s opponents, praising the job Lee Bowyer has done.

"It will be a tough and difficult test," said Appleton.

"Lee has done a great job there, they have good talented players and will be disappointed with their last result.

"They've had a free week which will help them, they will want to make sure they have lots of energy in the first half and hope we haven't got that to match them after a midweek fixture.

"We will look after our players, we will hopefully show the same sort of energy in Sunday's game to what we showed against Liverpool."

Sunday’s game will be available for Imps supporters to watch LIVE on WeAreImps iFollow.

To get involved and see the game unfold, buy your WeAreImps match pass for just £10 - HERE.

Two goals at the end of both halves brought three points for Michael Appleton’s side at LNER Stadium this afternoon in a game which was competitive from the first whistle to the last.

Jorge Grant netted his second goal of the season just before the break, with Lewis Montsma finishing off Lee Bowyer’s side’s stern resistance ahead of full time, meaning the former Premier League side returned to the capital fruitless.

The game got underway on Sunday afternoon at LNER Stadium with the breeze blowing over the slick playing surface. That was reflected in two quick chances in the opening five minutes, the first coming from the visitors as Conor Washington looked to profit from a direct ball forward but his shot went wide from just the edge of the box. Meanwhile up the other end, a clever reverse ball from Jorge Grant was close to setting Harry Anderson free but Ben Amos raced off his line to snaffle up possession.

It was a largely competitive encounter with both sides very well drilled and clear-cut chances were at a premium as a consequence, but City were to direct the ball on target twice from crosses into the box. Tom Hopper and Sean Roughan were both to get onto the end of balls into the box only to see Amos in the right place to save with relative ease.

The game sparked into life with a flurry of chances for the visiting side, Erhun Oztumer tested the reflexes of Alex Palmer before Macauley Bonne received the ball to feet deep inside The Imps’ area but his route to goal was blocked. The ball was laid off for a shot, but again there was no way through, as a host of City defenders raced to close down the ball.

James Jones blasted a free kick from 25 yards that whistled just beyond the post as The Imps were starting to find their feet and having a decent spell of possession.

However, Lee Bowyer’s side were always dangerous coming forward and almost got ahead in the game when Dylan Levitt’s low shot was deflected on its way to goal and left Palmer stranded but the ball thankfully went the wrong side of the post from the visitor’s point of view. Adam Jackson showed all his defensive awareness to deny Oztumer who had found a pocket of space inside City’s box, The Imps’ number 5 threw himself in front of the shot from The Addick’s number 20 to bravely block.

A set piece brought what looked like to be the final chance of the first half and it went the way of City, handball was the decision on the right corner of the Charlton box which resulted in a free kick. Grant lofted the ball into the danger zone and there was a foul given as the ball fizzed across the area…  Penalty to The Imps. Up stepped Grant, Amos saved the shot with his feet but the ball rebounded to Anderson who diverted it back across goal and GRANT swept home from close range.

The second half began much like what was witnessed in the first, as possession was exchanged but the busy and competitive nature of the game continued. Tackles were flying in, Roughan made a fully committed challenge to win the ball from Alfie Doughty as he threatened to break free down the Imps’ left which was a perfect example of the effort on show.

For the first time, the game became a little disjointed as neither side was able to really stamp their authority with the ball. Set pieces were increasingly looking likely for the next route to goal and Adam Jackson went close leaping to get onto a Grant set piece, somehow arcing his neck to flick a header which looped high and just onto the roof of the net.

The visitors were pressing higher and getting further forward with the ball too, and they almost broke free when three on three but Jackson read the roll of the ball perfectly, stepping in just as Washington thought he was in on goal.

With 20 minutes remaining there was a debut for Brennan Johnson, as the Nottingham Forest loannee replaced McGrandles but the visitors kept coming forward and that left gaps for City to try to exploit.

Roughan overlapped down the left, held up possession to give the ball to Grant who switched play with laser like precision to Anderson, his cross was teasing and came right through the box with Hopper just close to getting a toe on it but Grant was in behind him but couldn’t quite stretch enough to turn it home.

The Imps went close as Grant curled a free kick over the wall which Amos did well to save, diving to his left as City had a purple patch of possession with ten minutes to go. But as time wore on the visiting side began to throw more men forward in an attempt to level proceedings winning a late corner but Palmer commanding his area, punched clear. 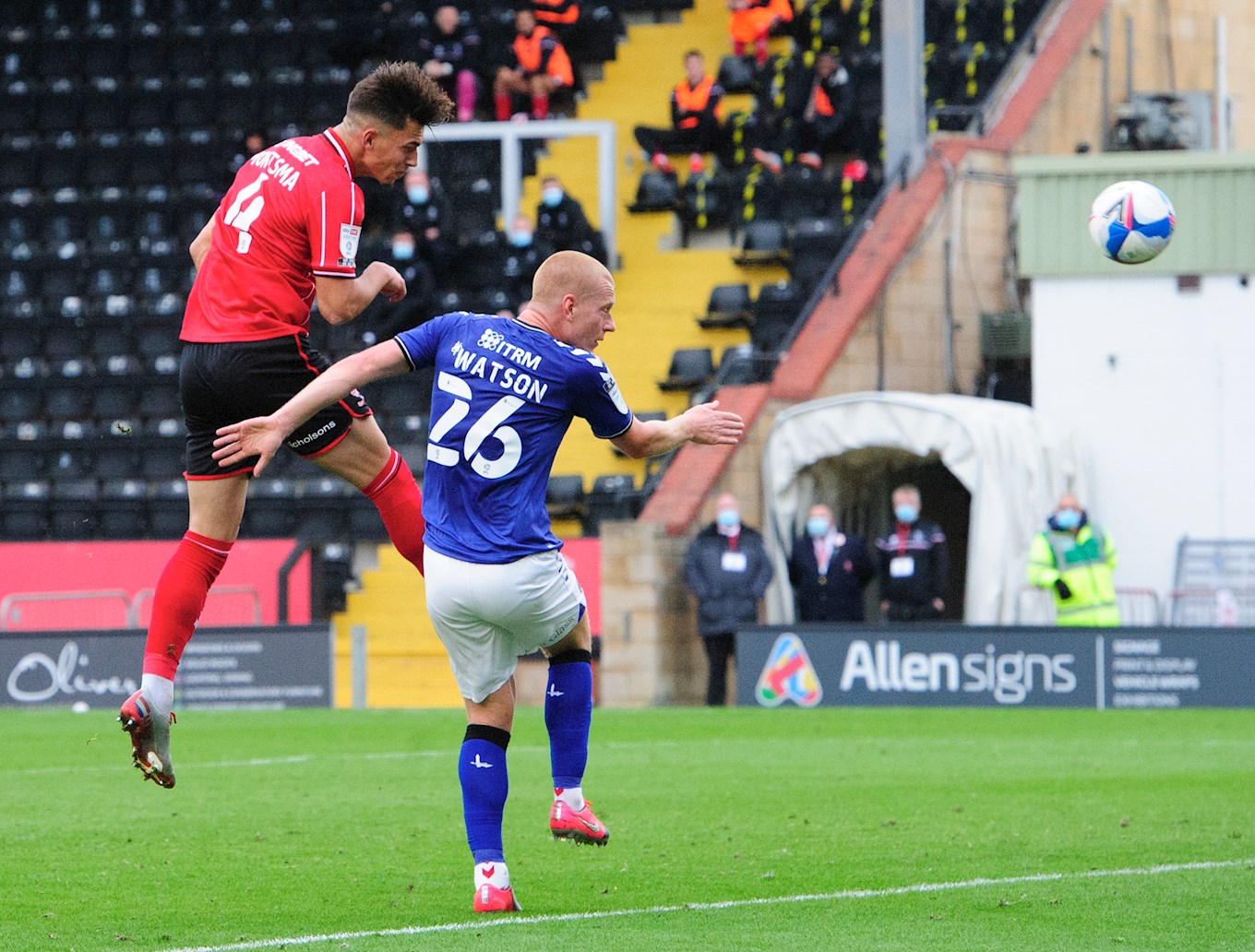 That solidity was the perfect platform for a second goal for The Imps and it duly came two minutes from the end of normal time. Grant’s corner found MONTSMA unmarked at the back post, who had the simplest of chances nodding into the goal. 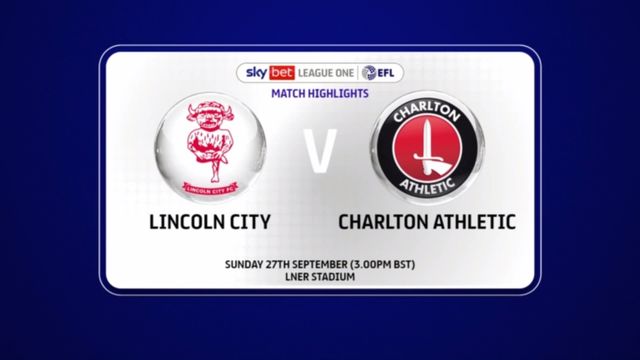 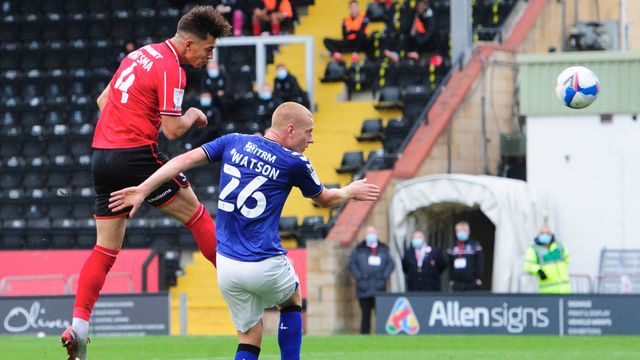