The Imps travel to Utilita Energy Stadium this week as they face Bradford City in midweek Carabao Cup Round Two action.

Lincoln have started the season strong, beating Crewe Alexandra 2-1 away from home to get to the Carabao Cup second round.

Home wins have also come against Oxford United and Scunthorpe United with the latter coming through a penalty shootout in the EFL Trophy.

Anthony Scully and Adam Jackson were most recently on the scoresheet for the Imps, both finding the back of the net at LNER Stadium on Saturday.

You can watch Tuesday night's game LIVE as it unfolds on We Are Imps iFollow with a match pass, click HERE to get yours now ahead of kick-off! Please note: Carabao Cup Fixtures that are not scheduled for TV will be streamed online, with one camera coverage in the UK only.

Season Ticket holders will be required to purchase a match pass for Carabao Cup fixtures.

Anthony O’Connor spoke to press ahead of Tuesday night's Carabao Cup Second Round game, explaining how his side won't get complacent.

“Of course, the incentive is there to go win the game and, if we secure a victory, we will have ourselves a really good encounter against the Premier League champions," said O'Connor.

“Therefore, we will be going all out to make sure we win the game, to hopefully bring a good cup match back to Valley Parade. Despite this, we must not get complacent. We will treat this game like any other and take it as it comes.

“We need to look back at the game against Colchester, dust ourselves down, take the positives and make sure we bring them with us, come Tuesday night.”

Bradford City have made four recruitments over the summer with Levi Sutton becoming the first arrival in July 2020. The 23-year-old who can operate in midfield or defence spent five years as a professional with Scunthorpe United where he made 58 league appearances as well as experiencing time out on loan with North Ferriby and Harrogate Town.

Former Grimsby Town striker Billy Clarke has also arrived, returning to Bradford for a third spell. The forward scored 24 league goals in 98 appearances during his inital stay at the club between 2014 and 2017. Clarke returned in 2019 for a brief stay before signing for Plymouth Argyle.

Bradford beat Bolton 2-1 in the Carabao Cup First Round with Harry Pritchard scoring the winner. Lee Novak was also on the scoresheet for the Bantams. Stuart McCall's side only managed a draw on the opening day as Colchester travelled to the Utilita Energy Stadium.

iFollow
All the action will be streamed live on iFollow for City supporters who subscribe to a match pass.
Click HERE to purchase your video/audio match pass before Tuesday's game which kicks off at 7pm BST. This game is only available for domestic based supporters.

The Imps secured their passage into the third round of the Carabao Cup this evening thanks to a devasting first half in which they scored four goals, setting up a mouthwatering tie against Premier League Champions, Liverpool at LNER Stadium in the next round.

Two goals in the opening six minutes set things up, the unfortunate Tyler French put the ball into his own net before Anthony Scully doubled the lead within 60 seconds of the restart. Lewis Montsma netted his second goal in Imps’ colours ahead of James Jones scoring his first for the club in some style. The second half remained goalless right until injury time when Callum Morton slid home his first goal in Imps' colours to round out the scoring for Michael Appleton's men.

The Imps flew into the lead with just five minutes on the clock, although it was in somewhat fortuitous fashion. After Callum Morton was brought down by Paudie O’Connor out wide on the left, Jorge Grant took the free kick from just outside the angle of the penalty area, the inswinging delivery into the box was sliced by French and it flew beyond Richard O’ Donnell and into the net. The second goal came within the blink of an eye after the restart, Harry Anderson racing down the right flank, then looked up before pulling the ball back to Conor McGrandles, his first time shot from the edge of the box went across the face of goal and bounced off the upright, sitting perfectly for Anthony SCULLY to force the ball home at the back post. 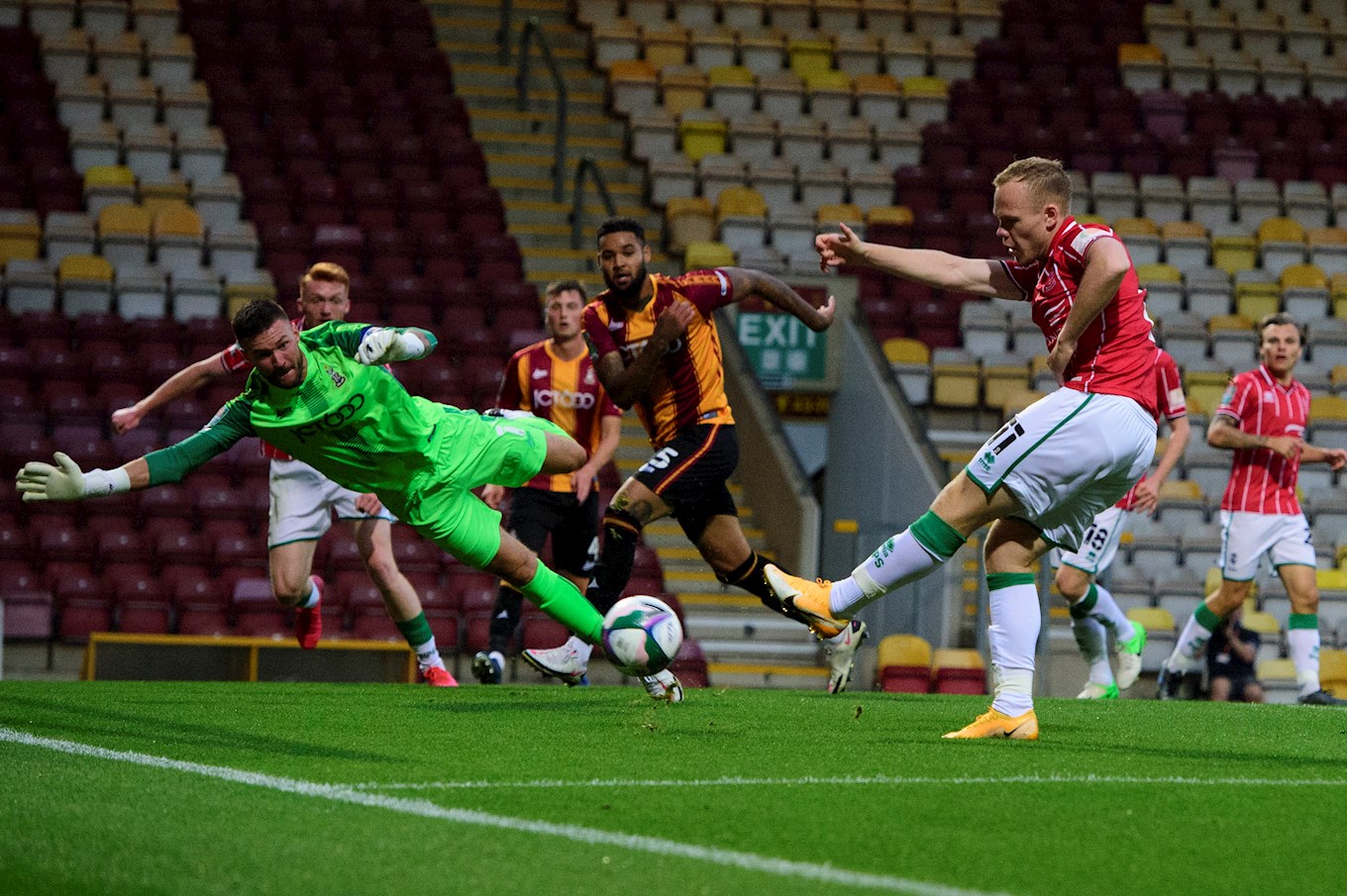 Bradford City looked to respond quickly from the double disappointment and looked threatening from set pieces. However, Alex Palmer in The Imps’ goal was a commanding presence, highlighted with a powerful punch clear under considerable pressure.  Palmer was soon at it again, stopping a low drive from the edge of the box by Callum Cooke which was heading towards the bottom right corner until the Imps’ ‘keeper’s timely intervention. The home side were trying to keep the pressure on as half time approached but The Imps were composed, calm and well organised quelling the threat of the Bantams.

The show of defensive solidity was the perfect precursor to The Imps netting two more goals ahead of the break. James Jones was brought down on the right and Grant delivered for Lewis MONTSMA to hammer home at the back post. There was no let up from the Imps who were showing no signs of letting their concentration slip.

The Imps were full of confidence in possession and that was epitomised by James JONES who with absolute finesse stroked the ball with the inside of his right boot from the edge of the box beyond the despairing dive of Richard O’Donnell.  The Bradford ‘keeper was in the action again just before the break denying The Imps a fifth goal. Morton taking the ball into the opposing half at pace before looking up to find Scully breaking in behind the Bradford defence but O’Donnell stood tall long enough to put off the Irishman and save.

The hosts made a double change ahead of the second half in an attempt to swing the momentum in the game and they did have a renewed vigour with no doubt the words of their manager, Stuart McCall ringing in their ears. Bradford were having more in advanced positions and they must have thought they were to get a goal back when Kurtis Guthrie was free at the back post a few yards out and he headed powerfully at goal but they didn’t account for Palmer’s agility and he made a terrific stop on the line.

Bradford were looking to force their way back into the game, but The Imps remained resolute. Without having to push to stretch the advantage it was key that they stayed organised, although the action was largely taking place inside the Imps’ half it didn’t mean that the visitors wouldn’t take the opportunity to get forward and O’Donnell had to race off his line to deny Anderson a chance at his near post.

Michael Appleton introduced first, Remy Howarth and then Tom Hopper for Scully and Anderson respectively as the game became a little stop start with time ticking away from a Bantams perspective. The home side were looking to apply the pressure but there was no change from a resolute and well drilled Imps’ defence. City rounded out the game by netting their fifth and final game in injury time, a wonderful first touch and cross from Grant was inch perfect inside the box for MORTON who slid home confidently under O'Donnell. 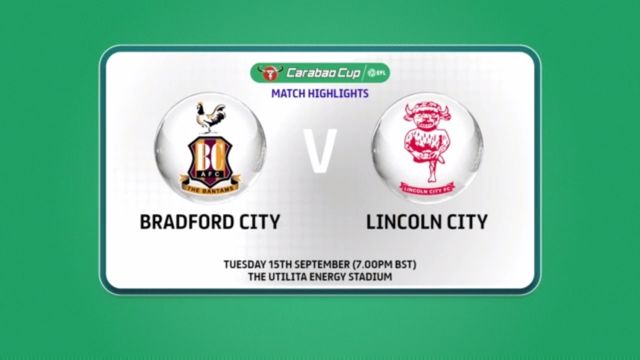 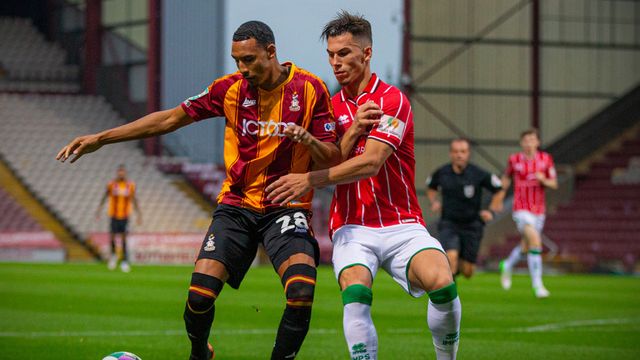