The Imps travel to Mansfield Town in EFL Trophy action this week following a successful weekend which saw City beat Blackpool 3-2 in Sky Bet League One.

Lincoln beat Scunthorpe United 4-2 on penalties in their last EFL Trophy fixture, after the game ended 1-1 at LNER Stadium with Harry Anderson being the City goalscorer.

Imps supporters can watch all the action LIVE on WeAreImps iFollow! Get your match pass HERE!

Mansfield Town boss Graham Coughlan is looking to field a strong squad on Tuesday night, telling the Stags’ website: “I want to win the game, so I’ll be fielding as strong a side as possible.”

The 45-year-old’s side suffered a 2-1 away defeat to Newport County at the weekend in Sky Bet League Two.

Coughlan discussed the game saying: “There were a lot of positives and things to take from the game at the weekend, but all I’m seeing from the game is the result.

“Top of the agenda is winning a game of football and I firmly believe when we win a game it’ll give us masses of confidence.

“I’m not making excuses, but we are making basic errors, and we are getting punished for every single decision.”

The Stags recruited 11 names over the summer with Stephen McLaughlin being the latest arrival joining the club from Southend United where he spent five years.

George Maris has also arrived at OneCall Stadium for an undisclosed fee from Cambridge United.

Imps supporters can watch all the action LIVE on WeAreImps iFollow! Get your match pass HERE!

The Imps progressed through to the next round of the EFL Trophy this evening after a convincing win over Mansfield Town at One Call Stadium.

Goals from debutant Jamie Soule, Anthony Scully and Theo Archibald ensured that Michael Appleton’s side progress to the knockout stage with a game to spare along with their final group opponents, Manchester City under 21’s.

Theo Archibald, making his first start in City colours was causing problems down the left from the off as he looked to get the better of former Imps’ loanee Kellan Gordon, The Imps number 14 was showing a real turn of pace and ability to get the ball into the box. Debutant, Jamie Soule was trying to get in behind The Stag’s defence but was also showing good strength with his back to goal. As much as City were dominating proceedings in terms of having more of the ball in attacking areas, when the hosts did get forward they found The Imps’ defence standing strong, giving away nothing like a sniff of a chance.

Jorge Grant was next to have a go for City as he smashed a low, bouncing drive just outside the near post from 20 yards as the Imps continued to knock at the door. Whilst Tyrese Sinclair tried his luck to net against the run of play for Mansfield Town, but his effort flew high over the top in what was their first attempt at goal at this point. City did break the deadlock and it was deserved, Remy Howarth hit a low shot on target which was parried by Aidan stone in the Town goal, it fell to SOULE who did the rest from close range.

Gordan hit an effort on target as the hosts tried to respond immediately, but Ethan Ross was perfectly positioned to stand behind the effort and clutch the ball confidently. Graham Coughlan’s side picked up the pace ahead of the break, having their best spell of the game but there was still no way though.

Tayo Edun rattled the side netting with a rasping drive from the edge of the box as The Imps looked to stretch the lead ahead of the break but the score remained unchanged as the referee blew for half time.

The hosts came out of the traps quickly pressing forward but it was Anthony Scully who was to add to the scoreline, after being denied once by Stone after being put through on goal, the Irishman wasn’t to be denied a second time as SCULLY stroked home City’s second goal of the evening across the Town ‘keeper from inside the box and in off the foot of the post.

The Imps continued to hold the advantage both in scoreline and possession, resulting in the home side making a triple switch to try and find a way back into the game just ahead of the hour mark.

However, City were to upset the home defence with a third goal and it was a show of anticipation and persistence from Archibald that brought it. Scully went from scorer to provider as he pinged the ball forward towards The Imps’ number 14, the ball held up in the air with Rollin Menayese under it but the Stag’s defender could only divert it skywards with Stone racing off his line. ARCHIBALD pounced first, stabbing the ball over the onrushing ‘keeper and into the open goal.

Mal Benning was close to puling a goal back for the home side within a minute or so, the defender hit a low shot which took a deflection on its way through which diverted it towards the bottom corner but Ross made a fantastic save, low to his left. Mansfield did pull a goal back when Menayese powered home a header from Benning’s corner.

City almost made it four with ten minutes to go when a terrific ball as TJ Eyoma from just inside his own half found Howarth racing in behind the home defence, he didn’t have the best of angles to get a shot away, so he held the ball up for Soule to shoot but Stone tipped it over the top.

There was a late substitute appearance for Hayden Cann, the academy prospect coming on to make his senior debut for The Imps as City saw out five minutes of stoppage time to seal victory. 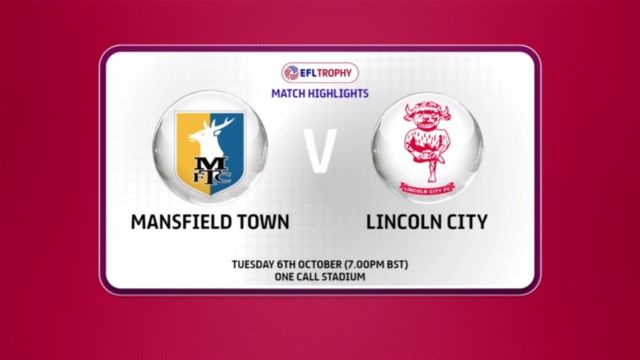 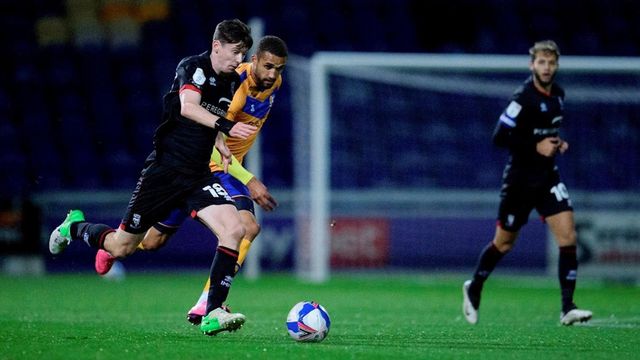