The Imps go into the fixture having drawn 0-0 against Fleetwood Town on Saturday, leaving them third in the Sky Bet League One table with 13 points.

Plymouth, who make the trip up to LNER Stadium on Tuesday currently sit sixth in the standings with 11 points, having won three and drawn two of their opening six games.

Ryan Lowe's side have won their two previous league games, most recently picking up three points against Northampton Town at the weekend. Argyle won 2-1 with Frank Nouble opening the scoring before Kelland Watts cancelled out Ricky Korboa's equaliser in the 88th minute.

Watch all the action LIVE on WeAreImps iFollow, get your match pass NOW!

Ryan Lowe wants his side to continue their impressive form telling Plymouth's website he expects a lot from his side over the next few fixtures.

“We won’t get carried away, we’ll keep plodding away. The last game has gone, we have to put it aside, and we’ve got to move on to the next one at Lincoln on Tuesday.”

Get your iFollow match pass NOW to watch the game unfold tomorrow night!

The Pilgrims have recruited a number of experienced Football League names over the summer, including the likes of Frank Nouble, Panutche Camará and Ben Reeves.

George Cooper and Lewis Macleod have also arrived at the club signing from Peterborough and Wigan.

Argyle have also signed Jack Ruddy from Spanish side Leganés with the goalkeeper providing healthy competition for Michael Cooper and McCormick.

Five loan signings have come through the door at Home Park this summer with Timmy Abraham the most recent signing from Fulham until January 2021. He joins team mate Jerome Opoku with the pair arriving at Plymouth from Craven Cottage.

Ryan Hardie and Kelland Watts arrive down south from northern clubs Blackpool and Newcastle. Watts was on the scoresheet in Argyle's last game, scoring the winner in the 88th minute against Northampton.

Tyrese Fornah adds depth to midfield joining the club on a season long loan from Championship side Nottingham Forest. The 21-year-old spent time with Lisbon based side Casa Pia earlier in the year.

WeAreImps iFollow match passes are available to purchase ahead of our game against Plymouth Argyle.

The Imps got back to winning ways on home turf this evening and kept a clean sheet too in defeating visitors, Plymouth Argyle. Jorge Grant opened the scoring early in the second half from the penalty spot before a first for Brennan Johnson sealed the deal for Michael Appleton’s men at LNER Stadium in the first league meeting between the sides in 18 years.

City started the game very brightly and on the front foot, taking the game to the visitors at pace and as the rain poured down over LNER Stadium playing surface The Imps almost took an early lead as Brennan Johnson raced in behind the Argyle defence but Mike Cooper in the visiting goal made a fantastic low stop.

Danny Mayor went closest for Ryan Lowe’s men a minute or two later as he showed quick feet to just create enough space to get a shot away on the edge of the box but former Argyle loanee, Alex Palmer got down to save.  Lewis Montsma then fashioned the next opportunity of the game as he sprayed the ball from right to left to the onrushing Jorge Grant, he took the ball into his stride and curled a low effort which crept just wide of the far post with the aid of a slight deflection.

With the slick pitch, tackles were flying in and both sides had players cautioned as the commitment to the cause was there for all to see. The visitors looked to press a little higher and as a consequence had a little more possession further up the pitch but The Imps’ defence were withstanding the pressure as Argyle looked to put the ball in the box from wide areas, Walsh and Montsma along with Palmer in goal were commanding the penalty area consistently closing the door on the visitor’s ambitions of finding a route to breaking the deadlock.

That defensive solidity and organisation was the perfect platform for City to create their next attack, Conor McGrandles linking up well just inside his own half with Liam Bridcutt and Jorge Grant before finding Johnson on the right deep in opposing territory, the ball was then hit low and hard into the box towards Tom Hopper but it was just diverted to safety ahead of The Imps’ number nine as he looked to pounce inside the six-yard-box.

Frank Nouble hit a shot straight at Palmer, as the game really started to open up for both sides with the ball going end to end more frequently than it had at any other point in the game and when Grant saw a cross right across the frame of the goal around a yard out, it meant the game would remain goalless at the break.

Much like the first half it was City who troubled the goalkeeper first, and it was a similar pattern of play too as Brennan Johnson made his way into the box but Cooper denied him. The Imps regained possession and a Jones cross was turned against the upright by McGrandles with Cooper beaten but, in the melee, following the rebound Johnson was brought down and the referee awarded the spot kick City’s way.

Up stepped GRANT and he rolled the ball home to score his fifth goal of the season. The goal gave City the added impetus to push for another and Jones tested the reflexes of Cooper as he hit a rasping drive from outside the box that the Argyle ‘keeper did well to save.

Jones went close again as he looked for another tester from range, this time a deflection fooled the ‘keeper but the ball looped over the top. Michael Appleton’s side were turning the screw aiming to extend the lead but the visitors had their turn at showing their defensive capabilities.

Slowly Plymouth made their way forward and after the introduction of a double substitute change, they found themselves inside the City box. Luke Jephcott, fresh from the bench did well on the edge of the box to prod the ball across to Byron Moore who had his shot blocked bravely. 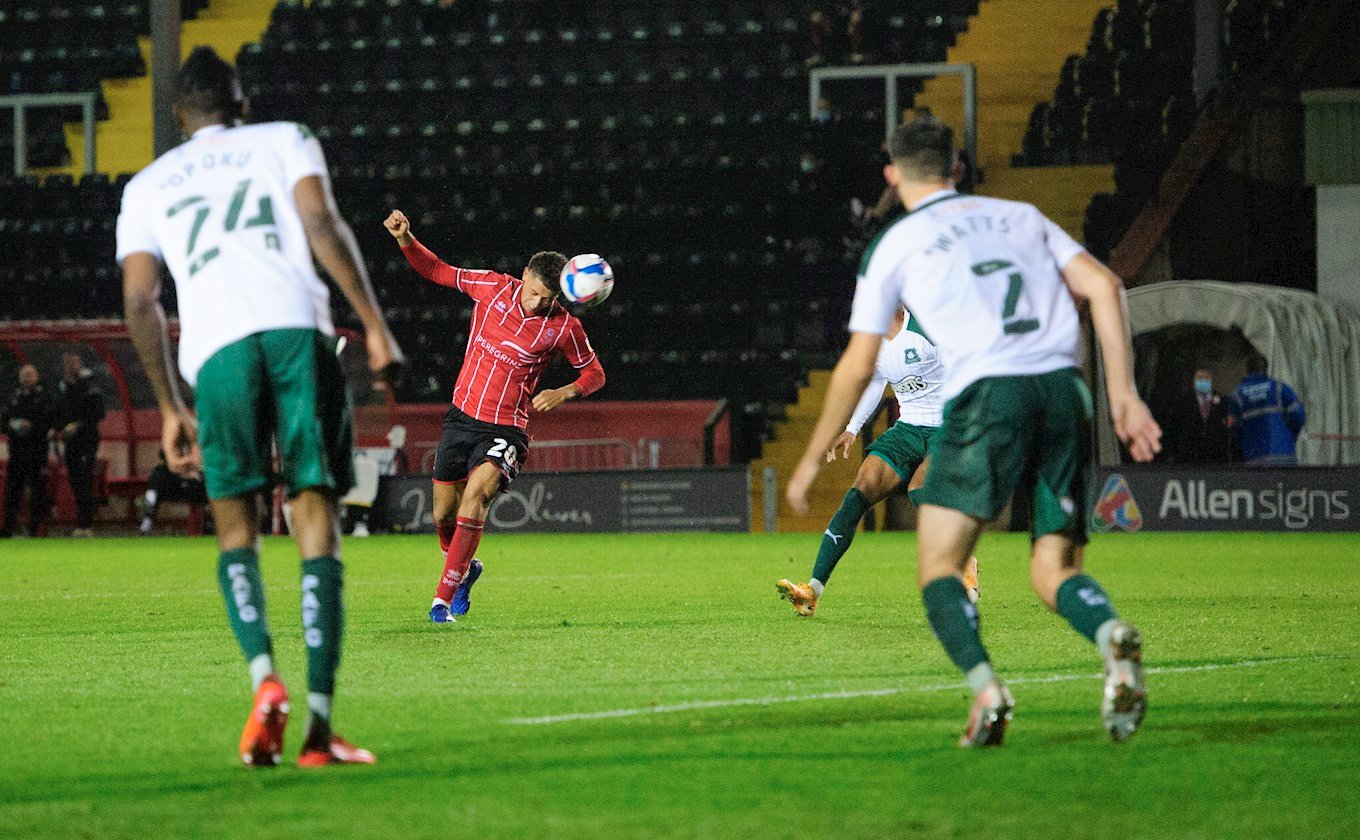 After that attack The Imps immediately broke forward with Harry Anderson just inside the opposing half, he fed the ball wide to Hopper who crossed into the box, the ball cannoned up into the air off Kelland Watt and JOHNSON raced to meet it with his head and cleverly steer the ball home not only for first goal in City colours but also his first as a professional.

That second strike for The Imps took the wind out of the Argyle sails somewhat and the home side looked to finish off the visitors, Anderson forced Cooper into a good save but he could only direct the ball to Anthony Scully, just as he thought he may hit the target Watt threw himself in at the vital moment to deny what looked like a certain third goal for The Imps.

Jephcott slashed a good chance to reduce the arrears for the visitors into the side netting as the game entered stoppage time, before first Scully and Anderson couldn’t turn the ball home for Michael Appleton’s men. 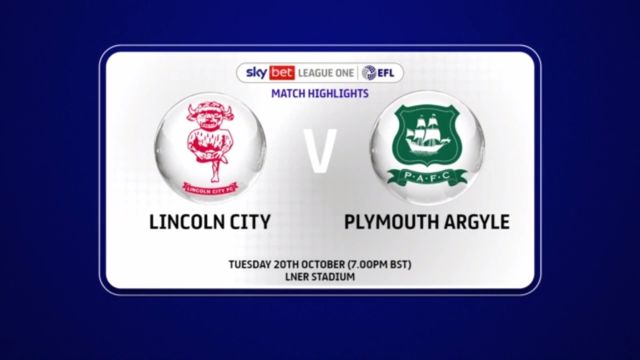 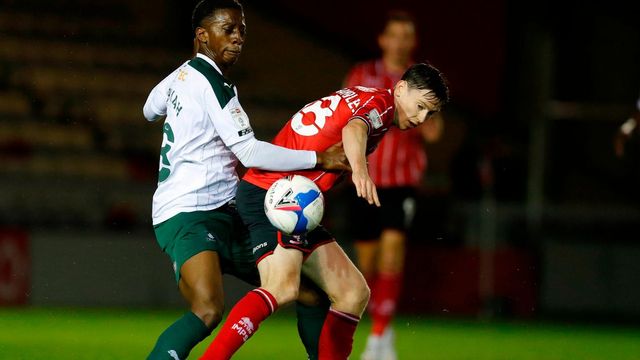