The Imps face Blackpool tomorrow afternoon in Sky Bet League One action, their second away league game of the season.

Michael Appleton’s side have had a successful start to the season and are currently second in the league following three victories from their opening three games, the most recent coming in a 2-0 win over Charlton Athletic with Jorge Grant and Lewis Montsma finding the back of the net.

Get your match pass HERE!

Blackpool boss Neil Critchley arrived at the club in March 2020 following a lengthy spell coaching within the Liverpool youth team setups. The 41-year-old had stood in as first team boss for the Reds on a number of occasions.

The Blackpool boss discussed the Imps as an opposition saying: “They’re in a really good vein of form, so it’s a difficult test for us. They’ve had a really good start to the season, scoring goals and not conceding many and winning their first three games.”

Critchley continued by speaking about his own side and how they can improve following a 2-0 away defeat to Gillingham.

“We want to improve from what we did last week against Gillingham," said Neil.

"You always want more, you’re never satisfied and all in three games our performance has been encouraging, but we know it’s a results-based business.

“We should have played better against Gillingham and that’ll be our aim on Saturday.”

The Seasiders have spent money this transfer window bringing in the likes of Jerry Yates, CJ Hamilton and Bez Lubala.

27-year-old Luke Garbutt could make his debut this weekend with the former Everton wide man arriving at the club last month. Garbutt has a wealth of Football League experience with former loan spells at six different clubs including the likes of Fulham and Wigan.

Lincoln City supporters can watch all the action LIVE this Saturday on WeAreImps iFollow!

Get your match pass HERE!

It may have been an afternoon of damp and horrible weather out on the Lancashire coast, but The Imps lit up Bloomfield Road with two late goals to come from behind and take all three points.

CJ Hamilton had given Blackpool the lead before Jorge Grant netted from the spot, after Brennan Johnson had been brought down by Demetri Mitchell. The offender for the hosts atoned for the error by putting his side back into the lead but before they could think about the three points Johnson was again brought down with Grant again finding the net from the spot. Before the final whistle though there was still time for one more and it was no surprise to see Lewis Montsma popping up at the back post to earn City a memorable three points.

The game got underway in torrential conditions with the rain hammering down and the blustery wind adding to the difficulties for both sides, The Imps were adjusting to the conditions and taking advantage of the very slick surface underfoot and putting the home side under considerable pressure as Brennan Johnson was close to finding the space to fire on goal on his full debut.

But the home side weathered the early storm on the pitch and began to attempt to turn the screw in their own favour, only to find stern resistance from City’s defence with Lewis Montsma and Adam Jackson in commanding mood. Jerry Yates tried to break the deadlock from just outside the box with a low drive, but Alex Palmer had it covered diving to watch the ball wide.

Blackpool kept applying the pressure and it told as they were to open the scoring following a steal of possession on the edge of the box, CJ Hamilton taking advantage thundering home low and hard despite the attempt of Palmer diving to his left to keep the ball out. The Imps were close to levelling within five minutes, Jorge Grant teasing in a cross from the left with Tom Hopper sprinting into the box, but as the City number nine started to think of applying the finishing touch in stepped James Husband to clear. The next chance came within moments though, and it was courtesy of Brennan Johnson, the Forest loanee fooled Demetri Mitchell but was hauled down and it was a penalty to The Imps.  Up stepped GRANT to confidently slot home his third of the season, smashing the ball beyond the despairing dive of Chris Maxwell.

The game opened up a little and pace from both sides was the order of the day, Johnson for Michael Appleton’s men and on the opposite side, Hamilton for Blackpool. Mitchell tried to atone for his earlier misdemeanour for the hosts, by shooting from range but his powerful effort flew over the top, wind assisted.

Liam Bridcutt was brought down by James Husband as the City skipper made a very promising run forward, the foul brought a striking chance for The Imps from around 30 yards. James Jones lined it up and fired it into the wall but with his next touch he found Johnson free on the right who looked for the top left corner, his placement was inches away and the ball drifted just over the angle of post and bar.  It was to be the closest either side came to a second goal before the break and certainly left everything to play for in what was a very entertaining game at Bloomfield Road.

Tom Hopper almost made the perfect start to the second half with a header from a Grant free kick only to see it go wide, before Hamilton’s pace got him away behind the City defence but his effort also was off target in a breathless opening few minutes.

Yates was next, creating space with a neat turn before trying a curling effort that went wide as The Seasiders tried in vain to nudge themselves in front.

The Imps were then to have a couple of close calls themselves, as an Adam Jackson was just caught underneath a dangerous cross from Grant from the left and TJ Eyoma’s driven cross was just grasped by Maxwell with Hopper in close attendance around six yards from goal.

Harry Anderson was brought down outside the box, just right of centre and Grant lined up the set piece and curled it on target but Maxwell was in the right spot to save.

Harry Anderson continued to pound up and down the right flank and tried his luck, cutting in from the right before lashing a powerful effort just over the top as clear cut chances had briefly dried up somewhat, unlike the weather!  City were growing in confidence, forcing the hosts back and the ball was spending more time in the Seasider’s half. A swift move started by a clever run and pass from Hopper freed James Jones who smashed on target, Maxwell made a terrific save and then he followed that up with another as the ball was turned back towards goal immediately, but somehow it didn’t end up in the net.

Against the run of play the hosts managed to get themselves ahead a corner was swung in from the right, the ball wasn’t cleared and it fell to Mitchell who swept home. But immediately from the restart, City were given another chance to level from the penalty spot, Husband bringing down Johnson and the Blackpool number three was shown the red card. Up stepped GRANT who sent Maxwell the wrong way to restore parity for The Imps with five minutes to go.

City piled on the pressure, looking to profit from the numerical and the goal came in the 88th minute, a corner from the left was pinged into the area and the ball found its way to MONTSMA who at the second attempt managed to squeeze home. 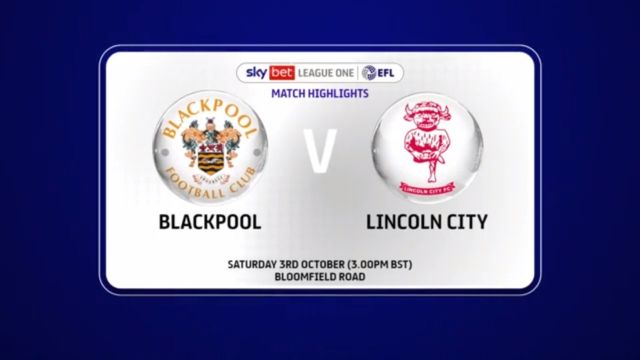 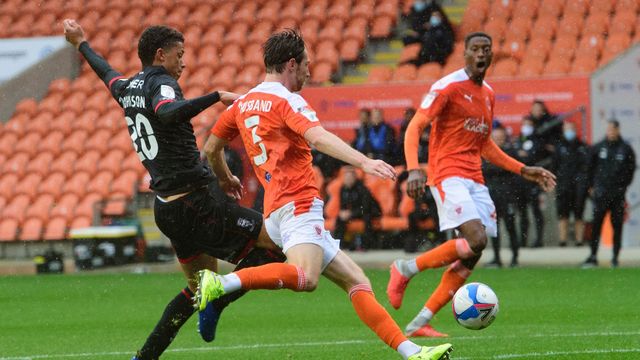