The Imps fell to a narrow 1-0 defeat this afternoon as Doncaster Rovers left with all three points. City dominated the ball and created a host of chances including two penalties, but the away side rode their luck and defended well to pick up the victory.

Michael Appleton made just one change to the side that was victorious at Portsmouth in midweek. Match winner Morgan Rogers was given a starting berth ahead of Anthony Scully who dropped to the bench.

It was a bitterly cold January afternoon between two sides at the top of the league and it proved to be a tightly contested affair at LNER Stadium.

The Imps started the match quickly with some positive passing play as the home side forced the visitors to concede some early set pieces, but Doncaster Rovers cleared their lines on both occasions.

The first real chance of the match arrived in the 7th minute as Jorge Grant produced a raking cross field pass to set Brennan Johnson away. The young winger then passed the ball inside to Tom Hopper who laid it off perfectly to TJ Eyoma, but the full back’s cross whistled across Balcombe’s six-yard box and the danger was averted.

Doncaster Rovers were threatening on the counterattack as Taylor Richards picked up on a loose ball before driving at the City defence, but his tame effort was well blocked by Adam Jackson as the hosts cleared.

The Imps were playing the ball around nicely with Tayo Edun having a lot of joy in attacking positions down the left, but Rovers were defending well in the early stages.

Despite City’s early dominance, it was Doncaster Rovers that took the lead in the 16th minute against the run of play. Taylor Richards was allowed to run at the City defence before striking a left footed drive from 20 yards which nestled into the bottom corner.

City responded well and had a penalty shout shortly after the opening goal. Liam Bridcutt clipped an excellent through ball over the top to Conor McGrandles who beat two men, before firing a left footed drive at goal. The Scotsman’s goal bound effort appeared to strike an arm, but the referee waved away the protests from the City players.

The Imps were so close to the equaliser in the 29th minute as Tayo Edun embarked on a fantastic run down the left-hand side before whipping a wonderful cross into the box. The delivery in had plenty of pace on it, which was met by Brennan Johnson, but his first time shot from 10 yards whistled past the post with the goalkeeper well beaten.

The home side continued to dominate possession but couldn’t quite find the breakthrough as the half time whistle sounded. City were quick out of the blocks at the start of the second half with Tayo Edun and Morgan Rogers getting to the by-line but their crosses failed to trouble the away side.

Ellery Balcombe was then called into action in the 50th minute to make a stunning save from Conor McGrandles. Brennan Johnson sprinted down the right before crossing to Morgan Rogers who saw his shot blocked from close range before the ball dropped to Conor McGrandles on the edge of the box and he rifled a shot at goal, but Ellery Balcombe did excellently well to tip the drive over the bar.

The second half started in a similar vein to the first with Lincoln City dominating the ball and getting into a number of great crossing positions but Doncaster Rovers were lightning quick on the counterattack.

City had an excellent opportunity to level the scores in the 60th minute as Jorge Grant was taken down inside the penalty area. The skipper stepped up to take the spot kick but Ellery Balcombe dived to his left to make the save, much to City’s frustrations.

Lincoln City continued to knock on the door, but Rovers were defending sternly as the Imps searched for that equaliser. Tom Hopper and Brennan Johnson had half chances, but it just wasn’t their day this afternoon.

Jorge Grant produced a moment of magic in the 83rd minute as he picked up the ball from distance before unleashing a ferocious strike but it canned off the cross bar.

Tom Hopper chased down a loose ball in the penalty area as Ellery Balcombe took down the centre forward in a moment of madness from the away goalkeeper. Substitute Anthony Scully stepped up to take the resulting penalty but it was saved again.

Doncaster Rovers held on to pick up the points and the Imps will be looking to respond next Friday in their trip to Gillingham. 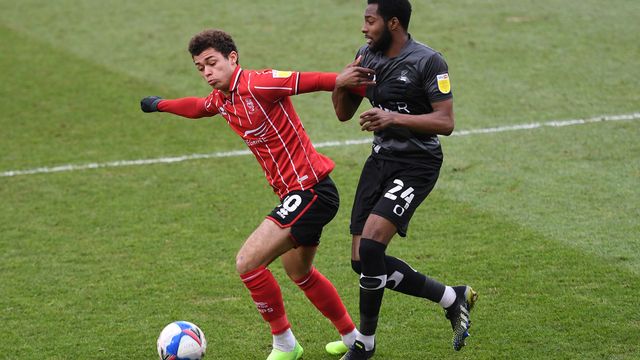