Lincoln City put in another excellent display in the 3rd Round of the Papa John’s Trophy after defeating Accrington Stanley 4-0 at LNER Stadium. The goals were scored by Zack Elbouzedi, Robbie Gotts, Brennan Johnson and Jorge Grant as the Imps secured their place in the last eight.

The Imps started the match brightly and created numerous chances to open the deadlock as they completely dominated the first half.

City’s first opportunity to open the scoring arrived in the 2nd minute of the match. A quick first time passing move between Robbie Gotts, Jorge Grant and Liam Bridcutt allowed an opening for Brennan Johnson who rounded the goalkeeper but took the ball too wide of the goal. The Welsh international was on hand to curl a right footed shot from a very tight angle but Toby Savin was able to recover in the Stanley goal to make the save.

The fast start continued, and City created another great chance just two minutes later as Anthony Scully burst down the right wing before whipping a delightful cross to the back post, but Zack Elbouzedi’s first time effort flew over the bar.

The away side threatened on the break as Rhys Fenlon showed great pace on the left wing, but TJ Eyoma recovered well before clearing the danger.

The home side continued to knock on the door and created another great chance in the 17th minute. Brennan Johnson did well to win possession on the halfway line before releasing Anthony Scully who was in oceans of space, but the onrushing goalkeeper made an excellent stop to tip the shot wide.

Toby Savin was in the thick of the action in the Accrington goal again as a wonderful cross from Jorge Grant cross was almost steered home by Brennan Johnson, but the young keeper was on hand to avert the danger.

Another golden chance for City arrived in the 37th minute as Zack Elbouzedi rattled the crossbar with a first-time effort but the Irish U21 international grabbed his goal five minutes later. The winger showed terrific trickery and pace before laying the ball wide to Anthony Scully who returned the pass across the 18 yard box to Elbouzedi, and the 22 year old showed great composure before firing a left footed strike into the bottom corner. This goal was more than deserved for the men in red and white who were excellent all evening. The chances were still arriving for City as Brennan Johnson skipped past the Accrington defence before firing a left footed strike at goal, but Toby Savin was equal to the effort, before Robbie Gotts had his shot blocked from the rebound, and the visitors cleared.

Accrington Stanley had a rare attack in the 41st minute as Rhys Fenlon and Tariq Uwakwe linked up well, before the latter fired a curling effort from distance, but it didn’t do enough to trouble Alex Palmer in the Imps goal.

Stanley’s best chance of the half arrived just before half time as Gary Roberts won the ball well in the box before passing the ball inside to Zehn Mohammed, but his powerful strike flew wide of the post.

The Imps carried on attacking Accrington Stanley after the restart as Toby Slavin was kept busy in the visiting goal throughout the second half.

This dominance and early pressure led to a second goal of the game in the 53rd minute via Robbie Gotts. The young midfielder on loan from Leeds United bagged his first goal for City and it was a terrific goal too. Zack Elbouzedi showed fantastic pace to break from his own half before running into the Stanley penalty area. The winger who was excellent all evening, laid the ball off to Jorge Grant who linked up well with Liam Bridcutt on the touchline. The Imps skipper then dug out a deep cross under heavy pressure and Robbie Gotts was on hand to guide a diving header into the net. Jorge Grant put in another excellent display in the middle of midfield for City as he drove forward in the 60th minute before hitting a shot from distance but it went wide.

The visitors could not cope with the pace and power of Lincoln City and a deserved third goal for the Imps arrived in the 62nd minute. An explosive run from Zack Elbouzedi down the left wing led to a pass inside to Brennan Johnson who composed himself, before calmly firing the ball past Toby Slavin.

The chances were still arriving for City as Adam Jackson, Zack Elbouzedi and Brennan Johnson came close to adding to the score line.

Accrington Stanley’s best chance of the second half arrived from a set piece in the 82nd minute. Joey Pritchard struck the free kick well from 25 yards but his curling right footed effort hit the side netting as Alex Palmer dived to his right.

City were not finished there though as they bagged their fourth goal of the match in stoppage time through Jorge Grant. A poor pass out from Toby Slavin in the Stanley goal who was excellent all evening was capitalised by Jorge Grant, who composed himself before calmly passing the ball into the net. 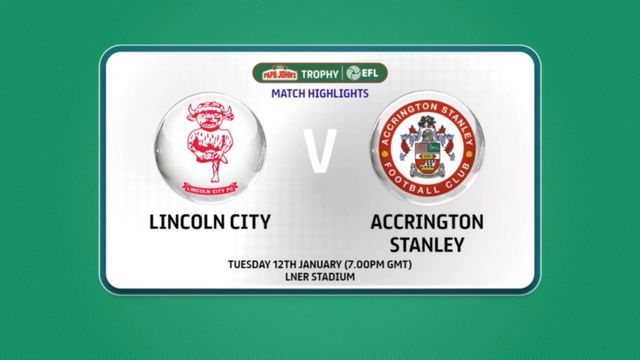 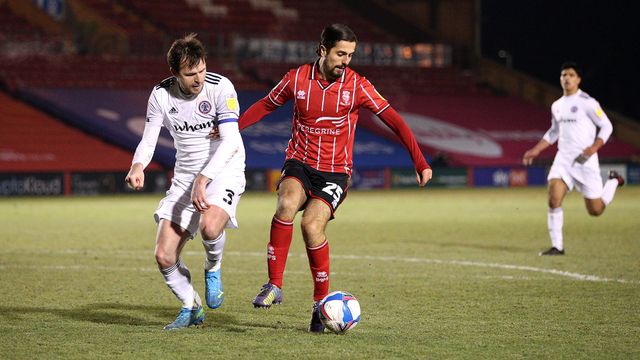