The Imps narrowly missed out on a place at Wembley following a cruel defeat on penalties in the Papa John's Trophy this evening at the Stadium of Light. Anthony Scully's second half strike was cancelled out by Charlie Wyke's header before a penalty shoot out decided the match.

It was a steady start to proceedings at the Stadium of Light with both sides looking tidy in possession, but neither team mustered a chance in the opening 10 minutes of the match with a place at Wembley at stake for the winner. The Imps won the first corner of the match as excellent play from Jorge Grant and Anthony Scully led to a good crossing opportunity, but the Irish U21 international’s delivery was headed behind. The resulting corner was whipped in by Jorge Grant, but Lewis Montsma could only head over the bar under pressure from the Sunderland defence.

TJ Eyoma, Anthony Scully and Jorge Grant were linking up well on the right-hand side and caused problems for the Black Cats as the Imps were looking for that early breakthrough, but Eyoma’s right footed drive flew over the crossbar in the 14th minute.

City were starting to knock the ball around nicely and were playing out from the back really well as they looked to break quickly. Smart play between Tom Hopper and Brennan Johnson led to an opening for Anthony Scully, but his shot didn’t trouble Lee Burge in goal.

The home sides first chance arrived in the 25th minute of the match as a dangerous looking ball from Aiden McGeady was whipped into the box, but the loose ball fell kindly to Alex Palmer. Callum McFadzean was sharp to a loose ball in the City box as he twisted and turned before hitting a low left footed drive which took a deflection behind, but the resulting corner came to nothing.

Alex Palmer was called into action for the first time just before half time as a great piece of skill from Aiden McGeady gave the Republic of Ireland international a chance to shoot, but his 25 yard drive was parried to safety and that was the last piece of action of the half.

The first chance of the second half arrived for Imps’ centre forward Tom Hopper as he capitalised on a mix up in the Sunderland defence in the 46th minute but his drive was stopped by Lee Burge who got down well.

Jorge Grant whipped in another decent free kick as Lewis Montsma looked to get on the end of it, but his header went wide under pressure from Conor McLaughlin.

The Imps started to gain a foothold in the match with some good movement and attacking play whilst the defence were marshalling the Sunderland forward line well.

Cohen Bramall showed great skill to beat his man with a nutmeg before laying the ball across to Jorge Grant, but the Imps skippers’ strike flew wide as the hosts were let off.

City’s pressure paid off in the 64th minute of the match as the Imps took a deserved lead through Anthony Scully. Cohen Bramall burst down the left wing before hitting a pinpoint cross to Conor McGrandles who forced a good save from the keeper, before Anthony Scully was on hand to tap in the rebound to make it 0-1. Sunderland respoinded well as Lynden Gooch stung the palms of the Imps’ number one as he struck a rasping drive from 25 yards, but Alex Palmer was well positioned to make the stop.

The home side were beginning to create chances as Gooch whipped a ball into the box to Charlie Wyke who saw his header tipped over the bar excellently by Alex Palmer.

The City goalkeeper was called into action again shortly afterwards as Max Power took a shot from inside the box, but Palmer was equal to it as Sunderland started to push for the equaliser.

Sunderland’s pressure paid off in the 75th minute of the match as Aiden McGeady’s cross was headed in expertly by Charlie Wyke to make it 1-1.

The Black Cats were pushing for a second as Aiden McGeady shifted the ball onto his left foot before striking at goal from distance but his effort was well saved by Alex Palmer.

Both sides began to push for the winning goal and it was City who came closest as a pull back from TJ Eyoma fell to Brennan Johnson, but his goal bound effort was blocked behind for a corner.

Unfortunately, the shootout ended in defeat for the Imps who had been on a terrific cup run and it was Sunderland progressed 5-4 on penalties. 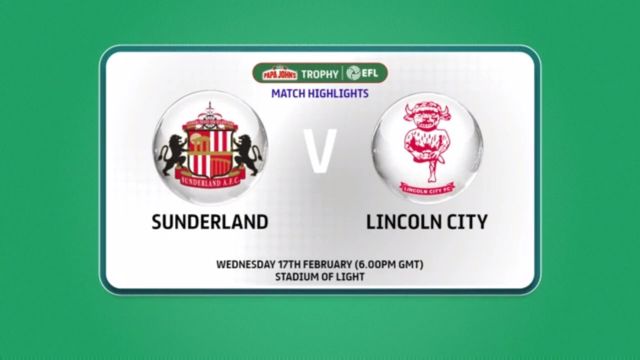 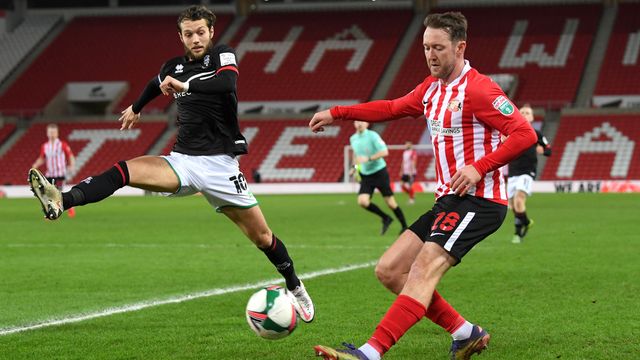