The Imps were to get back to winning ways in fine style today, Michael Appleton’s side tasting victory courtesy of a Tyler Walker double in front of a record modern day attendance at Sincil Bank.

City were in fine fettle throughout and rarely had their feathers ruffled as the former Premier League side were put to the sword in convincing fashion. The Imps number 17 scored either side of the break to seal the deal, taking his tally to seven for the season.

It could have been more for the Imps but for a lick of paint as Walker pinged the post with a second half penalty, Sunderland pressed for a late way back into the game, they couldn't break through a resolute and well drilled City defence who were deserving of all three points.

City made two changes to the side which took on Blackpool in our last SkyBet League One fixture, in came Michael O’Connor and Jorge Grant for Callum Connolly and Harry Anderson respectively. Both Connolly and Anderson however did have a spot on the bench with Jake Hesketh who made his first start for The Imps in the midweek Leasing.com trophy game against Manchester United Under 21’s

Sunderland stuck with the same side which defeated MK Dons last weekend, with the only changes on the bench as Aiden McGeady and Marc McNulty were amongst their substitutes. 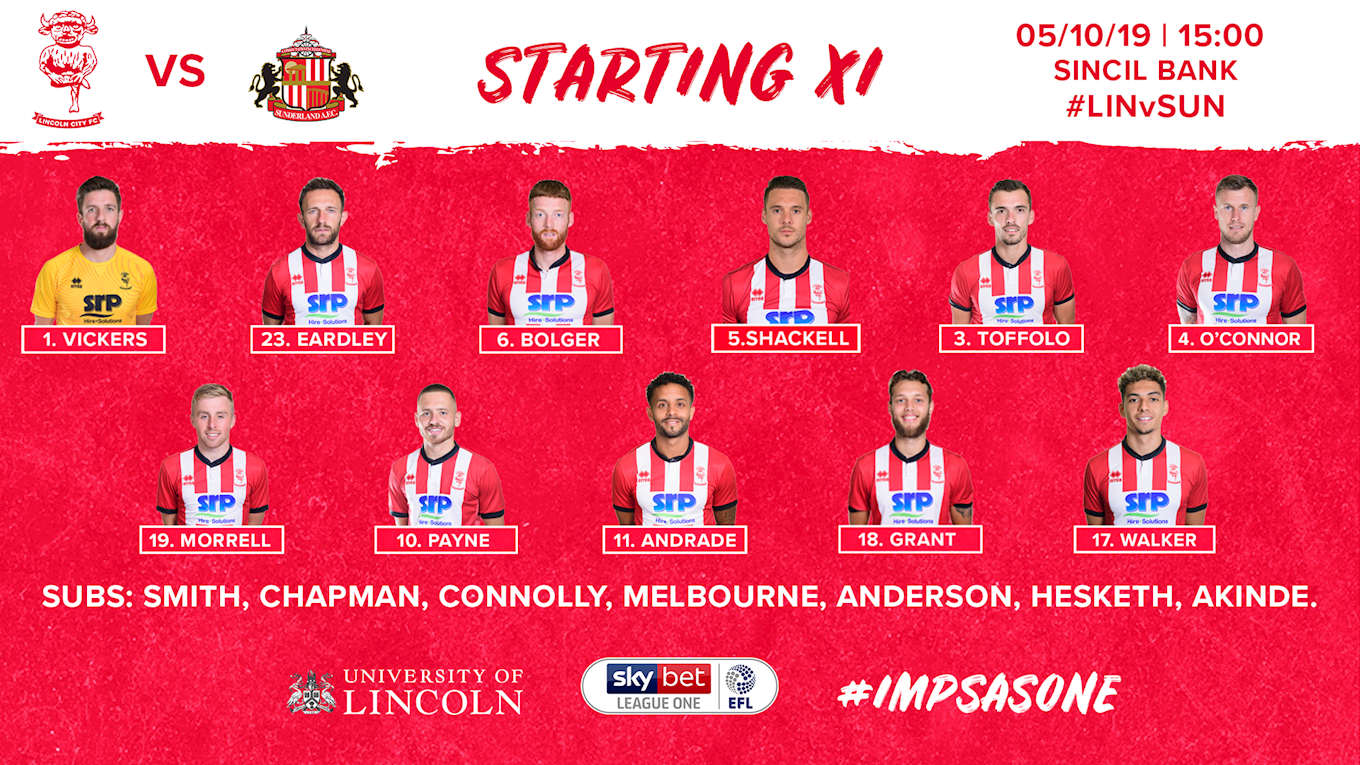 Over 10,000 supporters were packed into Sincil Bank this afternoon as the game got underway and as expected the atmopshere was electric, with the Sunderland fans travelling in numbers it promised to be as much of a spectacle off the field as on it. City were on the front foot from the off, with Jack Payne and Bruno Andrade looking very lively and certainly looking to feed off the noise the crowd were making.Jack Ross' side, who were unbeaten in five games before kick off were naturally buoyant in possession but hadn’t created anything like a chance in the opening ten minutes as The Imps had the majority of possession and territorial advantage in the game. City had a couple of half chances with set pieces won out on the left hand side, but Grant and Jack Payne’s crosses were both cleared to safety by the visitors.

Michael Appleton’s side continued to be the side looking more likely to open the scoring, Harry Toffolo driving down the left flank, running onto a Joe Morrell through ball almost unlocked the door then Grant had a shot blocked as Sunderland continued to be resolute at the back, however that was to all change just after the quarter hour mark. TYLER WALKER darted onto a teasing ball into the box which enticed Jon McLaughlin off his line and the striker got there just ahead of the Sunderland stopper to poke the ball home.

City continued to pour forward positively and it was another set piece which almost brought the second goal, a delicate centre from Payne was flicked on at the near post by Jason Shackell but this time Jon McLaughlin was there to clear up the danger before Walker could snaffle up his second of the game at the back post this time.  The visitors were struggling to deal with City’s movement and swift play

Sunderland, despite their lack of opportunities to this point showed all their experience and kept looking to be positive, they began to hunt down possession in packs at times and they were to get their first effort on target from Laurens De Bock. The Belgian curled an almost perfect effort towards the top corner but it was met with an equally stunning save from Josh Vickers who diving to his left clawed it away for a corner bringing a worthy standing ovation from all the City faithful.

City were imperious at times, oozing with confidence and the visitors had the unfortunate Payne to thank that they weren’t to go two goals behind. Toffolo was fed in perfectly by Grant down the left, the fullback pulled the ball back to Walker who sidefooted at goal only to see the ball strike his teammate, Payne just ahead of him. Vickers was brought into action just before the break, a shot from Chris Maguire had to be guided wide by The Imps’ stopper. Jack Ross’ side pressed for the equaliser deep into first half injury time, Jordan Willis tried to force the ball home from inside the box only to see Grant throwing himself infront of the ball to block as a captivating opening 45 minutes came to a halt.

Sunderland came out for the second half looking very determined in their pursuit of an equalising goal, pressing higher up the field and as a result making City step a little deeper defensively. However they were still up against the solid City defence which refused to buckle, Neal Eardley showed tremendous composure at the back post to turn away a bouncing, swerving ball at the back post with Charlie Wyke incoming alongside him. The visitors won a corner that Joel Lynch headed wide, but that was in no small part due to the presence of Cian Bolger.

The Imps were given a chance to extend their lead as Andrade danced into the area and was brought down by De Bock and referee Brett Huxtable immediately pointed to the spot. Walker hit his spot kick hard to the ‘keeper’s left but the ball hammered off the upright and back across the goalline then out for a goal kick.

In an all action opening ten minutes of the second half, Andrade was a pest for the Sunderland defence as he continued to torment De Bock, he showed the Belgian a clean set of heels before squaring into the box but Jordan Willis cleared in front of Walker who was shaping to shoot.

City’s patient yet almost persistent pursuit of the second goal did come to fruition just ahead of the hour mark. The Imps broke up a Sunderland attack down the left as Toffolo halted sub, Aiden McGeady’s forward run, play was quickly switched by Payne to Andrade out on the right and his cross was pinpoint to WALKER who confidently turned home. 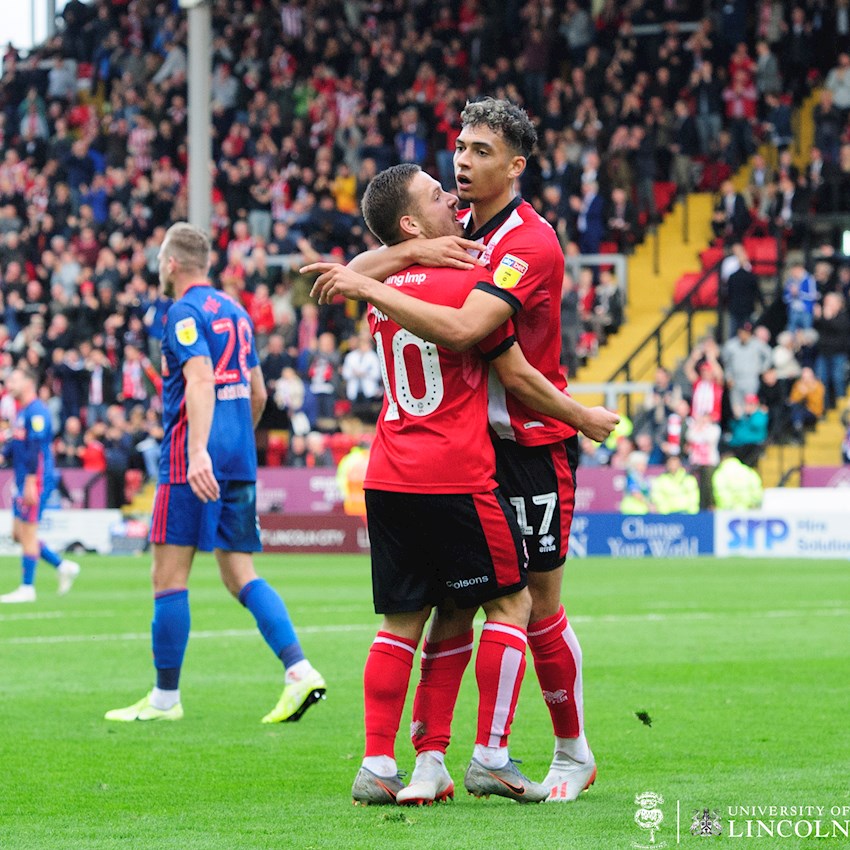 The visitors made a final throw of the dice by introducing Will Grigg onto the field, but again it was Appleton’s Imps who were causing the problems as Payne took control in midfield before lashing a low, bouncing effort which forced Jon McLaughlin into a smart stop low to his right.

Sunderland as a unit began to step a few yards higher up the field and were as a result forceful as they had been all game with the extra attacking option available to them, City though were unfazed, solid and compact with Vickers still to be tested in the second half.

With the attacking options in the Sunderland armour there was always a chance that they could bear their teeth but The Imps were keeping them at arm’s length, the team defending as a unit but when the visitors did find Wyke in space in the box he couldn’t steer his shot on target.

The Imps were denied a third goal in stoppage time when Walker was halted in his attempts to get on the end of a Payne cross by Connor McLaughlin but it didn’t dampen a terrific atmosphere and a fantastic afternoon for everyone supporting City.