The Imps chances of progressing to the next round of the Leasing.com Trophy were made a little harder this evening as they were defeated by Manchester United Under 21’s at Sincil Bank.

Despite having the lion’s share of possession and numerous shots on target, the stat that counted the most was the single goal scored by the visiting side which put them through to the knockout stages. United struck midway through the first half courtesy of James Garner to take the spoils in a game which the home side dominated for long periods.

City made eight changes to the side which ran out against Blackpool last Friday night for the visit of Manchester United Under 21’s in the Leasing.com Trophy tie this evening. Jake Hesketh came in to make hjs debut for The Imps, also there were starts for Ellis Chapman, Max Melbourne and Aaron Lewis amongst the players coming into the starting eleven. 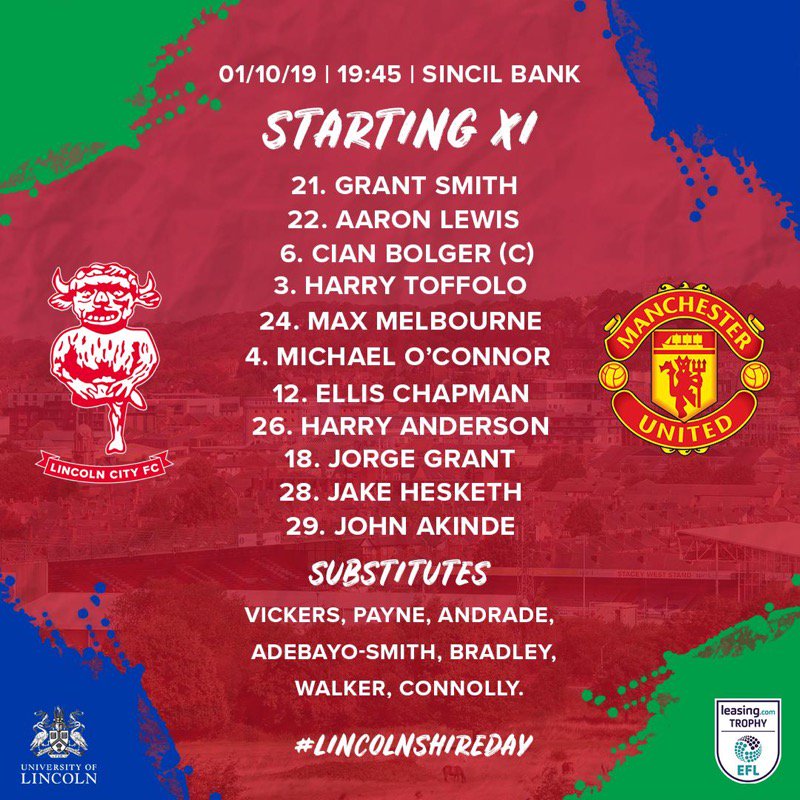 The Imps almost raced into a second minute lead with the first attack of the game, Jake Hesketh linking superbly with Jorge Grant who raced into the box and got his his shot away but Matej Kovar in the United goal stayed big to deny the City man the early strike, the first of many saves throughout the night from the visiting 'keeper.

City's pursuit of a quick goal continued, first a long ball forward from Cian Bolger, skipper for the night, almost caught out the visitors defence as Hesketh looked to race onto it but Teden Mengie did well to hold off the marauding City attacker to just turn the ball from danger. Then Grant took aim from distance and smashed a low drive which Kovar did very well to save down low and keep possession of the ball which gathered pace off the slick Sincil Bank turf. Michael O'Connor showed tremendous timing in the tackle to dispossess Ethan Galbraith in the heart of midfield to set another attack going, Grant sliding a cross into the box which again called Kovar into action diving low to grasp the ball ahead of John Akinde. Then Harry Toffolo's overlapping run presented an opportunity to cross and he picked out Akinde, whose goalbound effort was blocked by Mengie. The Imps were confident in possession and constantly on the front foot, pinning back their opponents deep into their own half. Harry Anderson was the next to try his luck, a low stinging drive which walmed the palms of the United stopper who was straight behind the effort to save, then the United defence had the woodwork to thank after Toffolo found Hesketh who tried the first-time effort that beat Kovar only to see it rattle off the crossbar.

For all City’s dominance, it mattered little as United netted with their first attack which was swift and incisive, James GARNER picking up possession following some quick passing and movement, before the United skipper measured a low curling shot from the edge of the box in off the upright with twenty minutes gone.

The visitors were looking stronger in possession after the goal, with Tahith Chong the instigator of much of the forward play from United, he almost unlocked the door for a second goal when his quick thinking and through ball found Aliou Traore inside the box,  Grant Smith made a good strong stop as he raced off his line to close down the angle.

Largie Ramazani smashed a free kick from 25 yards over the top of Smith’s crossbar, City though also went close as a Toffolo cross to the near post almost caught out Kovar who scrambled to cover as the ball hit the side netting.

Grant then scuffed a good opportunity wide following great work from Harry Anderson who took on two men before finding his teammate inside the box. Hesketh had a shot charged down on the edge of the area before Anderson struck the post from a Toffolo cross as City finished the half the stronger and certainly deserved something from the first half.

Like the opening minutes of the first half, City ran their opponents hard right from the off first, Akinde did find the net only to see it ruled out for offside in the build up then moments later O’Connor then hit a first-time volley wide of the mark as he rushed onto the ball at the back post.

United then almost undid themselves when a wayward back pass towards Kovar in goal was just wide, the resulting corner was hit to Bolger who headed towards the corner only to see it cleared from under the crossbar.  Grant was to curl a free kick from 20 yards over the wall and on target but Kovar dived to his right to save as The Imps kept up the pressure.

In what was a rare attack for the visitors in the second half to this point, Ramazani struck the post from distance then Hesketh had a shot saved by Kovar as the game really opened up.

Bruno Andrade came on for Hesketh and the City number eleven was the next to test the reflexes of Kovar. A quick attack with some lovely one touch football down the left which was started by Andrade, involving Toffolo on the overlap found it’s way back to the Imps’ sub who hit a fierce first time effort that United’s ‘keeper did well to save.  Michael Appleton’s side were moving the ball quickly and creating space to cross with regularity, but the United defence were doing just enough to keep out the marauding Imps.

City introduced Callum Connolly and Jack Payne in an attempt to force the leveller as the attacking intent from the home side continued going into the final 15 minutes of the game with the ball spending the majority of the time deep inside the United half. 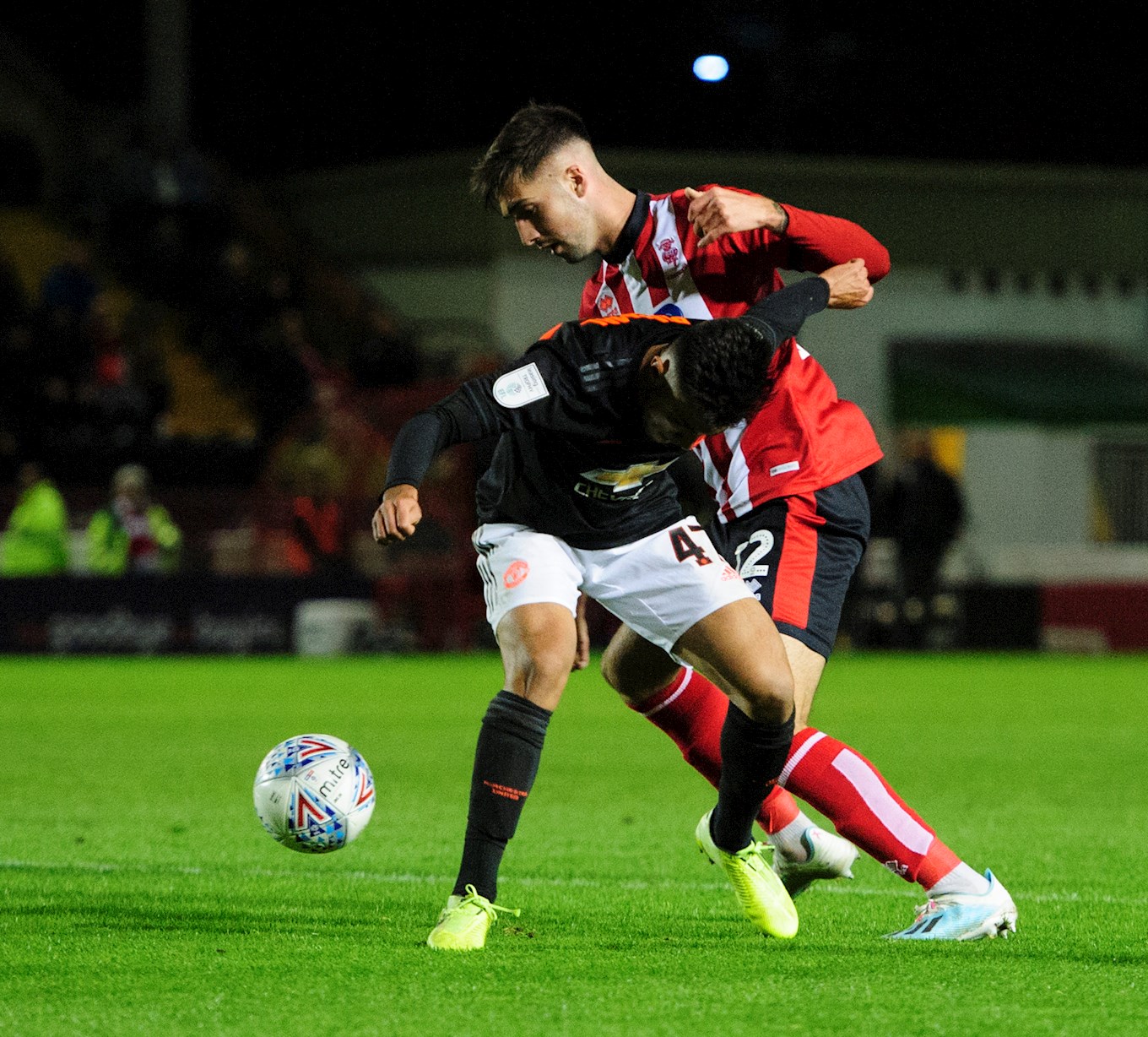 Toffolo showed a wonderful touch and turn of pace to beat his man, he laid the ball inside to Grant who in turn fed Connolly, the Everton loanee struck his effort sweetly but it was too close to Kovar to cause him too much of a problem.

Ramazani was close to putting the game beyond The Imps with less than ten minutes to go, he raced onto a long ball forward, with only Smith to beat, the United man chipped the ball beyond the ‘keeper but the ball struck the upright before being cleared to safety.

Andrade won a late corner for The Imps which Bolger met powerfully, but Kovar was again in the right place to save then on the break Traore forced Smith into a save then the City ‘keeper was called into action yet again this time he saved from Elanga. City pushed for the late leveller in an attempt to force penalties but it wasn’t to be.

The Imps 0 Manchester United U21 1