City slipped out of the FA Cup in the cruellest of fashion at Sincil Bank this evening, with some suggesting that the visitors got redemption for their last visit to the home of The Imps. Alan Judge swept home in the final minute of stoppage time after a game which was dominated by the home side.

Michael Appleton’s side will certainly feel hard done by as they took the game to the Tractorboys throughout but just couldn’t make the breakthrough and they paid the price when the Republic of Ireland international lashed home to break the hearts of the home fans as they now travel to Birmingham to face Coventry City in round two.

City made four changes to the side from last weekend’s game at Gillingham as Cian Bolger, Jorge Grant, Harry Anderson and John Akinde all were in the starting line up. Notably there was a spot for The Imps number 16 on the bench this evening, Michael Bostwick was back in the matchday 18 for the first time since mid September.

The visitors made three changes from the side which took on City in the original fixture at Portman Road, goalkeeper Tomas Holy came in along with Republic of Ireland international Alan Judge and Brett McGavin. 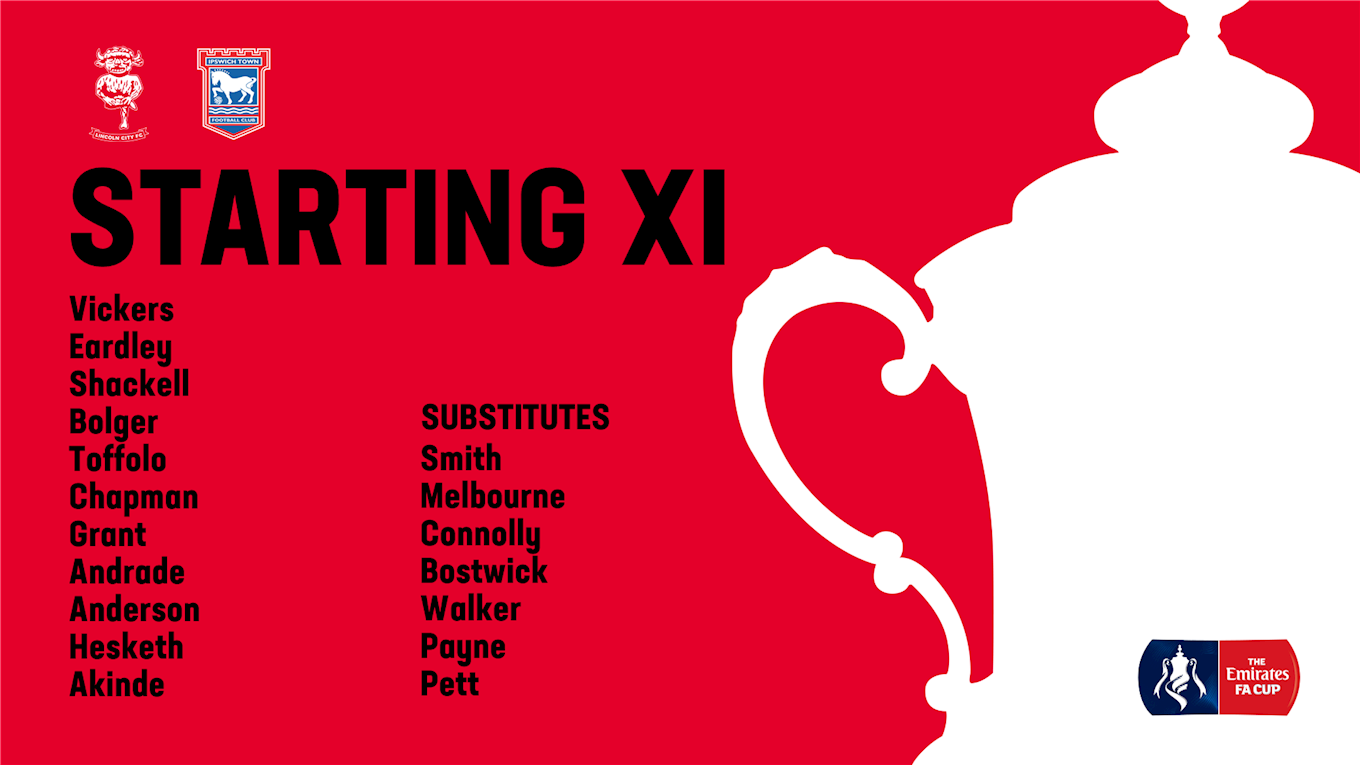 There was a raucous atmosphere ringing around Sincil Bank as the game got underway, with City pressing and on the front foot. Jorge Grant in the heart of The Imps’ midfield was pulling the strings, he switched play from left to right and Neal Eardley picked up possession and then the full back slid the ball into the feet of John Akinde who turned Aristote Nsiala but the defender stretched out a leg to concede the first of two quick corners for Michael Appleton’s men but the Tractorboys managed to keep out the marauding Imps.

Akinde was proving to be a real thorn in the visitor’s side as his bustling style was at times too much for James Wilson to deal with however, Tomas Holy in the Ipswich Town goal was yet to be tested.

Emyr Huws got the first shot away for Paul Lambert’s side in their first purposeful attack down the right but Josh Vickers watched it sail wide. Right from the start City had been quick into the tackle out of possession and it was creating openings for a quick break. The speed of thought first from Grant and then from Jake Hesketh opened up the Ipswich defence like a hot knife through butter, feeding Akinde in space around 12 yards out but the Imps’ striker couldn’t turn the ball home.

Bruno Andrade was the next in line for City to have a pop at goal, he picked up the ball on the edge of the box but it bobbled up, waiting for the ball to drop it allowed the visiting defenders to regroup but the City man still managed to get his shot away but it fizzed wide with the aid of a deflection.

The Imps continued to press and were again close to the breakthrough midway through the first half, Eardley’s deep centre was picked up by Andrade, he looked up and waited for Harry Toffolo in support before rolling the ball into his path, Toffolo shot but it was again deflected just off target.  The home side were having the better spells in attacking areas as the movement of Andrade, the vision of Grant and the pace of Harry Anderson down the right were all causing different problems. City were dealt a blow before the break when Andrade had to be substituted after he went down innocuously deep inside The Imps half, Jack Payne coming on to replace him with ten minutes of the first half remaining.

Michael Appleton’s men continued to knock at the door, Ellis Chapman was close to nicking the ball from the toes of the Ipswich ‘keeper as he chased a slow rolling back pass but it was the visitors who had the first shot on target in stoppage time. Will Keane took possession around 25 yards out, he twisted and turned beyond Jason Shackell and hit his shot hard and true, the ball was rising towards the top corner but Vickers made a terrific fingertip save to ensure the teams went in level at the break.

It was almost one-way traffic in the opening ten minutes of the second half as The Imps were firmly on the front foot and looking the more likely to affect the scoreline than the visitors.

Akinde lashed a shot across the face of goal from right to left, which wasn’t far wide then the striker was denied by Holy in the visitors goal as he raced off his line to block the one on one chance.  Hesketh nicked the ball as a slack pass across halfway came into his path, the Southampton loanee fed Akinde who was forced wide but he held play up until Toffolo joined him, the full back looked up to smash a cross hard into the box but Holy somehow held onto the ball with Payne and Hesketh racing in beyond him.  Ipswich then had James Wilson to thank as he somehow managed to get his head on a fantastic cross from Eardley which Akinde was waiting to turn home at the back post.

Huws brought a little respite for the visitors when he tried a shot from distance that Vickers had to save, then Chapman did very well to slide in and intercept as Alan Judge thought he’d wriggled his way inside the City box. But play arguably reverted to type as Holy then made a fantastic diving stop, getting down low to his left as Hesketh thought he’d sneaked one inside the near post before Chapman hit a low swerving drive that curled just outside the post as the action inside the final third of Ipswich continued.

Huws was once again keen to get a shot away, but the end result was the same as Vickers stood firmly behind it to save. The visitors were to put some pressure on the City defence with just under twenty minutes left, a high right-wing cross to the back post was well won by Nsiala and it looped back into the six-yard box but Shackell was there to hammer the ball clear of danger. Tackles were beginning to fly in and the game was really hotting up adding a new complexity to proceedings with both sets of fans looking to urge their respective sides into a grandstand finish.

Michael Appleton introduced Tyler Walker for the final ten minutes of the game and he almost had an instant impact, as he cracked a wonderful effort on target which stung the palms of the Tractorboy’s ‘keeper. As the game crept into stoppage time murmurs went round the ground from the home crowd, hoping for a repeat of the last time Ipswich were in town and it was so close to happening as Hesketh was denied by Holy, but the visitors snatched the win to progress to the next round, JUDGE smashing home a left wing cross from 10 yards in the 94th minute of the game.

Ahead of our Emirates FA Cup 1st Round replay v Ipswich Town on Wednesday 20th November, we are able to provide supporters with ticket information including pricing and priority periods. There is also important information for Buildbase Legend’s Lounge Season Ticket Holders below.

Any Season Ticket seats not purchased during the pre-sale period, will become available in the My Imps and General Sale periods.

Ipswich fans will be housed in the Stacey West Stand, meaning that the home areas will be; Coop Stand, Selenity Stand, Bridge McFarland Stand and University of Lincoln Stand.