City take back to the field in FA Cup action this weekend as we revisit a stadium which holds many memories for Imps’ fans as we take on Ipswich Town.

Portman Road was the venue where almost 5,000 saw The Imps draw 2-2 in round three of the competition back in 2016 which was of course the precursor to a memorable replay at Sincil Bank against the Tractorboys.

Fortunes since that day have changed of course, with both sides now competitors in SkyBet League One. Our opponents this weekend have made a positive start to their season as they look to regain their status in the Championship following relegation at the end of last term, as Paul Lambert’s side currently occupy top spot in SkyBet League One.

Following a long undefeated run, the Tractorboys stuttered a little in recent weeks which saw them temporarily usurped from their spot at the summit of League One. Defeat at Accrington Stanley then a home loss to Rotherham United gave an opportunity for the chasing pack to overtake Ipswich, however since those defeats our hosts this weekend have bounced back with two wins on the road at Southend United and Rochdale respectively.

Town manager, Paul Lambert, said following his side’s midweek win over Rochdale that he expects to shuffle his pack a little due to the amount of fixtures coming up over the hectic Christmas period when he was asked about his team selection.

"I'll look at that. We'll wait and see. Guys who weren't here (at Rochdale) will play. Guys who didn't have 90 minutes will play. We need everybody and, as I've said before, we can't play 46 games plus with the same guys. It's impossible. Whoever plays I trust to perform."

There are a number of figures at Portman Road this weekend who have former connections with The Imps and one of them, Danny Rowe, told the club’s official website he’s looking forward to a game against a club which he holds dear.

"It was beneficial for me, going on loan there. The first season we won the EFL Trophy and the second season we won the league so I have good memories from my time with them. It was important to go out and play games and they gave me that opportunity so I'm thankful for that. 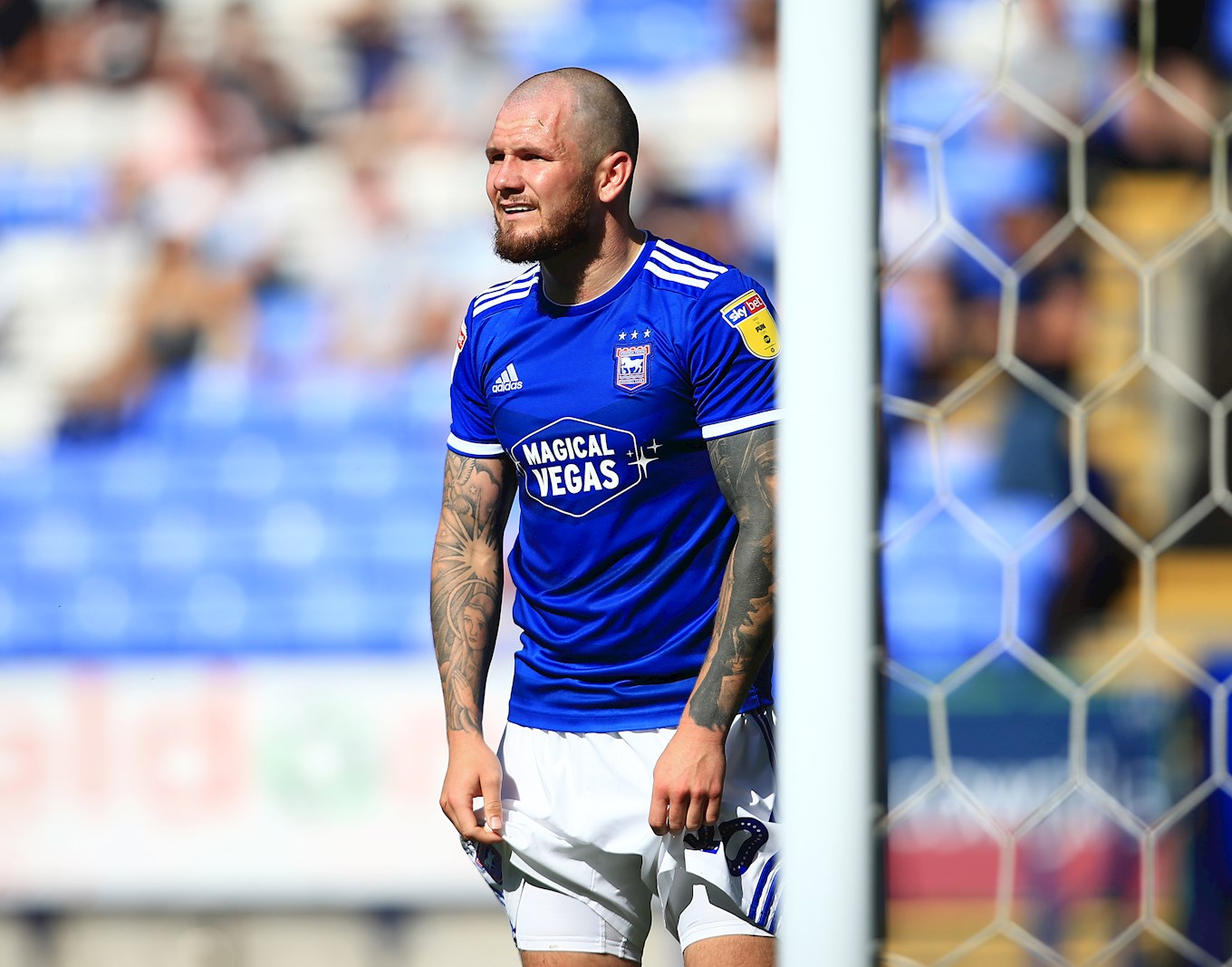 James Norwood moved to Ipswich Town in the summer following a successful scoring few years with Tranmere Rovers and the 29-year-old has continued that form with his new club.

Norwood started his career with Exeter City before spending a couple of loans away from St Jame’s Park with Forest Green and Eastbourne, during that time the striker made a name for himself with a couple of goals in eleven appearances for the club based in Nailsworth which eventually led to a permanent move to The New Lawn.

In his time as a permanent member of the Forest Green squad, Norwood’s career kicked on. The striker netted 49 goals in 165 games before moving to the North West to Tranmere Rovers. His goals per game ratio whilst on the Wirral improved, as he netted just under 100 goals whilst at Prenton Park in 180 appearances which attracted the eyes of a host of other clubs, paving the road to Portman Road.

Since joining the Tractorboys, he has scored seven goals in 14 apps (inc subs) and will no doubt be hoping to add to that tally this weekend.

Remember if you’re not heading down to the game this weekend, the commentary is LIVE on WeAreImps iFollow. The live commentary is provided this weekend by BBC Radio Lincolnshire’s team of Rob Makepeace and ex Imps’ manager, Steve Thompson.

It’s a replay under the lights at Sincil Bank in the FA Cup once again against Ipswich Town after Michael Appleton’s side drew at Portman Road this afternoon.

It was a real game of two halves as The Imps dominated proceedings in the first half, taking the lead deservedly with Tyler Walker’s eighth goal of the season from Andrade’s low cross. Walker was denied the opportunity of giving City a two goal lead when Will Norris saved a spot kick from the City striker.  But increasing pressure from Paul Lambert’s side eventually paid off as Dozzell levelled things up, earning the hosts a replay.

City made one change to their starting line up ahead of kick off in the FA Cup first round this afternoon, Jake Hesketh coming into the side in place of Jorge Grant, the pair swapping places as Grant takes a place on the bench.

The home side made a raft of changes from the side which featured in midweek against Rochdale, but one former Imp was in their starting line up as James Wilson would take on City for the first time since leaving the club. Also, there was a familiar face on the bench in the shape of Danny Rowe. 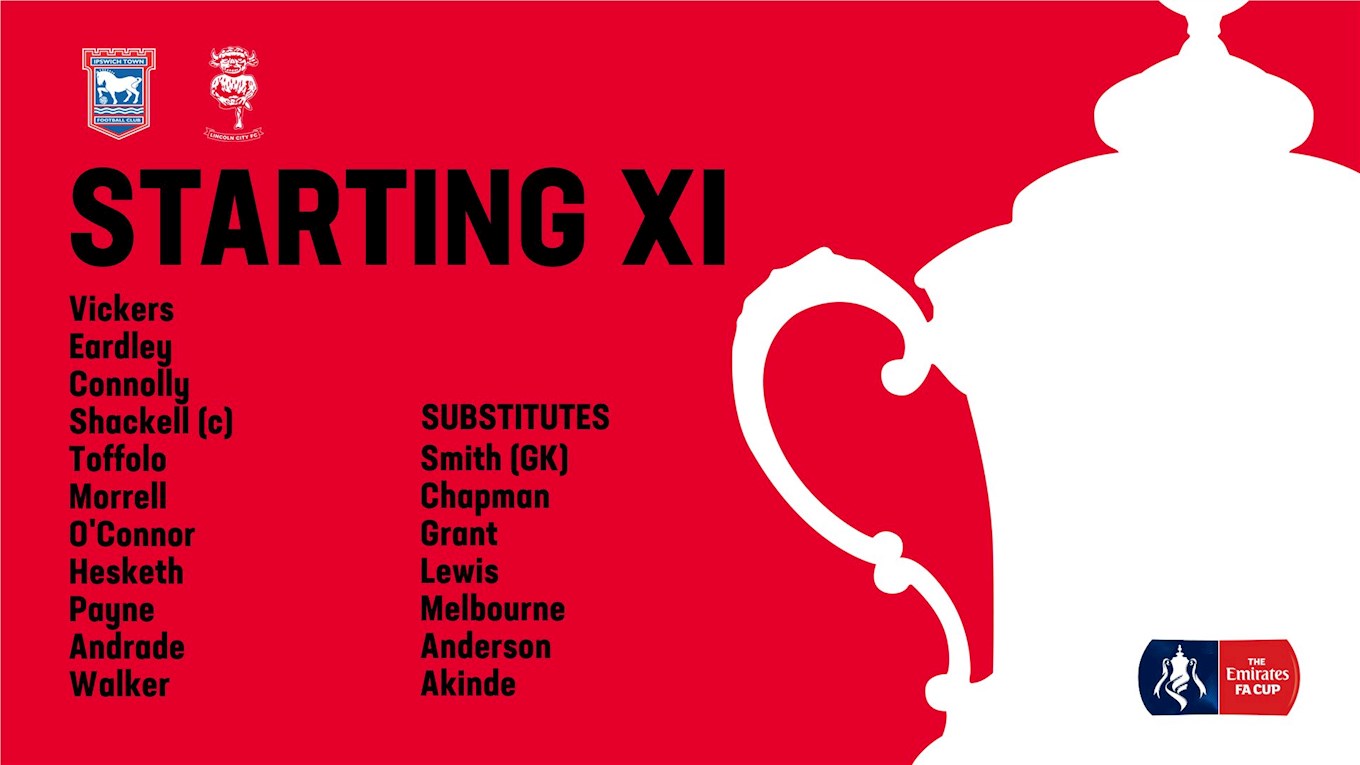 Following an impeccably observed minute of silence the action got underway at Portman Road, and despite the stadium not being near to capacity it didn’t dampen the spirits of the supporters who were in the stadium. With just over 1,000 Imps making the trip they were doing their best to urge the visitors to goal, Jack Payne tested the reflexes of Will Norris in the Tractorboys goal before an early penalty shout was waved away by the officials after Jake Hesketh went to ground under pressure inside the area.

Ipswich though were showing their own attacking intentions, as Flynn Downes set Will Keane on his way on the edge of the Imps’ box, the former Hull City man rattled a shot on target but it was straight down the throat of Josh Vickers who saved with relative ease.

The game was very open with City working the flanks to good effect, a neat link down the right and cross into the box from Payne sneaked right through the heart of the Ipswich box but bounced just too far ahead of Bruno Andrade who was lurking at the back post.

As the half wore on City were growing as a group and after a powerful burst down the left from Harry Toffolo, aided by Joe Morrell, Andrade twisted and turned down the right to cross but it was cleared for a corner. Morrell had a shot blocked from the resulting corner as The Imps were eeking further forward in possession and taking control, Payne burst down the left and crossed for Tyler Walker who just couldn’t get the necessary purchase on the header which drifted wide of the mark.  Andrade then was to create the best chance of the game for City to this point. Andrade made a purposeful run down the right, looking up before crossing low towards the box, Hesketh was there but he couldn’t quite wrap his foot around the ball and his effort didn’t trouble Norris in the Town goal leaving the Southampton loanee with his hands on his head in frustration.

However, that frustration quickly turned to joy as Hesketh once again found Andrade and he played in the perfect ball for WALKER to turn home with confidence from around ten yards, giving the visitors the lead and it was no less than they deserved. 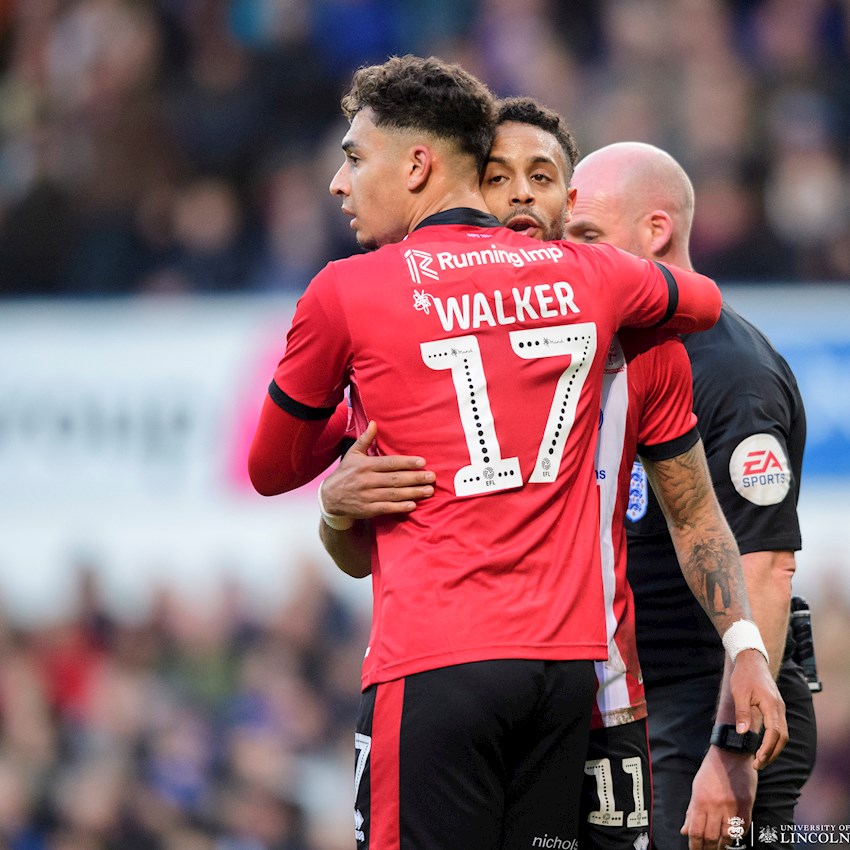 As the half time whistle blew the home supporters were less than enamoured by what they’d seen from their side, conversely the travelling Imps delighted after a confident and very positive opening 45 minutes.

Half Time
Ipswich Town 0 The Imps 1

The second half began much like the opening 10 minutes of the game, very open and both sides getting healthy distance into opposing territory without breaching the defence. Andrade finding Walker in the box but the striker was unable to net his second of the game before Payne was working hard in the Imps’ defensive third charging down a shot from Myles Kenlock.

Hesketh fired a shot on target which Norris did well to watch and save as it swerved from left to right on its way through to the keeper, then the Tractorboy’s stopper had to be alert to pounce on a cute through ball from Payne which was inches away from Walker and Hesketh dashing in at the back post.

The home fans were doing all they could to help their side regain confidence and attempt to gain control of the game and they thought they had done so when Downes smashed a low shot on target, but Vickers was in the way stopping the equaliser. Keane then headed over the top from a left-wing cross within a minute of that chance as the home side gathered a little momentum.

Toffolo then made a monumental block at the back post as Town pressed hard for the leveller before City broke at pace and it was the turn of Norris to keep the home side within reach of The Imps.  Andrade with Hesketh to his left and Walker to his right as he ran deep into opposing territory, he slid the ball into Walker who looked up and fired on target but the Wolves loanee was equal to it as he rushed off his line to save.

Ipswich continued in their quest for the equaliser and went close following a run and cross down the right from Emyr Huws, his ball in went across the face of goal and just eluded Keane slid in as the striker ended up in the back of the net without the ball.  The Imps though were dangerous as ever on the break, Hesketh just losing his footing as he was about to fire on goal but the ball found it’s way to Andrade and he was denied by a brave block by Donacien.

The chance for a second was to come though in the 74th minute, Hesketh brought down in the box by Toto Nsiala and the referee immediately pointed to the spot. Up stepped Walker but Norris guessed right, saving the initial effort, it rebounded to the City number 17 and his second attempt went wide. The near miss immediately breathed new life into the hosts and their supporters and they were to level five minutes later, Andre DOZZELL measuring a curler into the corner of the goal from the edge of the box giving Vickers no chance.

Downes then almost matched his teammate as he tried to hit the opposite corner from a similar distance but the ball crept wide as Ipswich were puffing out their chests going for the winner in the final ten minutes.

City sub, Jorge Grant, was brought was brought down on the corner of the box in front of the travelling supporters giving a last chance for the visitors to snatch a winner. He played in the ball and it fell to Jason Shackell who fired hard and low on target but it rattled off a number of players before somehow just squeezing inches wide.