The Imps welcome Portsmouth to LNER Stadium for the first time in almost 37 years with their last trip coming in February 1983.

Lincoln have shown impressive home form in recent months, having not lost a SkyBet League One game at home since September. City's last outing at LNER Stadium saw them beat Blackpool 1-0 with Tyreece John-Jules scoring the only goal of the game.

Imps fans can keep up with the game LIVE on WeAreImps iFollow with all the action being streamed domestically and internationally, with commentary coming from BBC Radio Lincolnshire Sport’s team of Michael Hortin and Steve Thompson – For details click HERE.

Portsmouth go into the game having reached the fifth round of the Emirates FA Cup following an impressive 4-2 over SkyBet Championship side Barnsley at the weekend. Ben Close, John Marquis, Ronan Curtis and Christian Burgess were all on the scoresheet for Pompey at Fratton Park.

Kenny Jackett's side last league game came away to Bolton Wanderers. Portsmouth came out winners with the only goal of the game coming through Christian Burgess, the defender has scored in two of his previous games

Portsmouth boss Kenny Jacket guided his side to a EFL Trophy last season, the 58-year-old's side are currently one point off the play-off places in 8th.

Jackett spoke to press ahead of Portsmouth's trip to LNER Stadium explaining how he was pleased with his side's performance at the weekend: “I’m pleased to say we took more of the chances in what was quite an open contest, with some very good finishing.

“My thoughts now quickly turn to the league and facing Lincoln on Tuesday, then Sunderland next Saturday.

“But our supporters should be encouraged by the performance and hopefully we can have a really strong finish to the season.

“We’re guaranteed to have played at least 59 games, and that’s without going any further in the cups or being in the play-offs.”

Imps fans can keep up with the game LIVE on WeAreImps iFollow with all the action being streamed domestically and internationally, with commentary coming from BBC Radio Lincolnshire Sport’s team of Michael Hortin and Steve Thompson – For details click HERE.

Lincoln City lost out on the points as Portsmouth scored two past the Imps in front of 8,983 at LNER Stadium.

The Imps’ starting 11 saw two changes to the line-up which started against Ipswich Town on Saturday.  Tayo Edun was replaced by Conor Coventry with Tom Hopper making his full Imps debut at LNER Stadium in place of Tyler Walker. 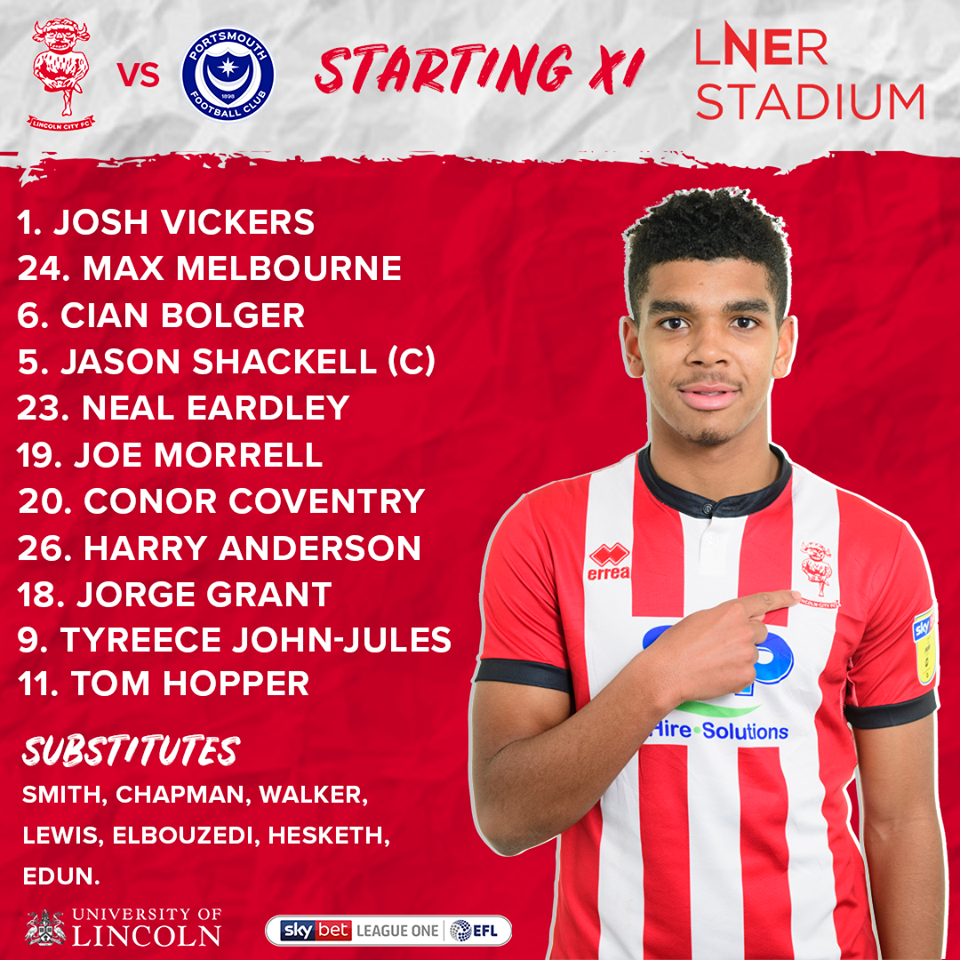 The Imps started the game well with an attacking opportunity in the opening minutes. New arrival Tom Hopper received the ball in Portsmouth’s half before playing it to Jorge Grant who was able to beat his men before attempting to lob Alex Bass at the back post, however, the midfielder’s attempt was slightly too heavy.

The Imps continued to attack the visitor’s end, this time with Tyreece John-Jules attempting to break the deadlock with a shot from outside the area. The young forward received the ball from Hopper who was played through by Joe Morrell on a promising counterattack for City.

Neal Eardley was the first player in the referee’s book getting a yellow card just before the half an hour mark. The Imps right-back was penalised for putting in a late challenge on John Marquis.

Harry Anderson gave away a free-kick during an Imps attack. Eardley was racing forward with the ball looking for his teammate, however, Anderson clumsily ran into the back of Ronan Curtis who was attempting to get the ball from Eardley, giving the visiting side a free kick in their own half.

Portsmouth’s Ben Close was the second player in the book for a challenge on Morrell in the centre of the park, the Imps midfielder was looking to burst forward after getting the ball from Hopper.

The ball was played out to attacking left-back Melbourne who provided a cross to the near post, before being cleared by Close. It landed back out to Grant on the left who hammered it into the box, just over the head of Anderson.

The fourth official showed four minutes added time as both sides continued to break the deadlock in the opening 45. Portsmouth’s Curtis wasted an opportunity when he rushed his shot on the edge of the box after bringing the ball down well with a great touch.

Anderson was slow with possession in the close stages, giving the ball away just in front of the halfway line. Pompey burst forward trying to find an opener, Cannon’s shot was blocked by Cian Bolger before Steve Seddon was fouled by Morrell on the edge of the box giving away a free-kick.

Curtis fired the ball straight past the wall and into Josh Vickers’ goal giving Pompey the lead with the last kick of the half.

Lincoln started the second half looking for an equaliser. John-Jules was bundled down by Burgess winning a free-kick for the Imps to the edge of Portsmouth’s box.

Grant took the set-piece, attempting to find someone at the back post, but the midfielders’ ball was slightly overhit. Moments later the Imps were on the attack again, this time Hopper with a drilled cross into the area which found John-Jules. The young forward hit the ball at the wrong angle sending it over Bass’ goal.

The visiting side were awarded the first corner of the game, winning it in front of their travelling fans with Seddon sending it to the back post. Sean Raggett was there but his header was way off target going out comfortably for a Lincoln goal kick.

The Imps won a free kick on the halfway line when Marquis fouled Melbourne, clattering the City man who was sprinting forward with the ball. Portsmouth’s number 10 received a booking for his challenge.

Michael Appleton made his first change of the game on the hour mark bringing another attacking option on with Lincoln’s top goal scorer Tyler Walker replacing Anderson.

City continued to pile men forward in hunt for an equalising strike. Grant provided a great one-two with Melbourne before finding Walker in the Pompey box, however, the frontman was slightly delayed in pulling the trigger giving the visiting side an opportunity to clear to safety.

Portsmouth man Naylor received a booking for catching Hopper with a high foot. The Imps were awarded a free-kick which was fired into the back post where Bolger was waiting. The ball eventually fell to Conor Coventry on the edge of the box who couldn’t quite get over the ball properly, sending his shot over the bar.

Vickers pulled off a great stop as Pompey looked to extend their lead with a powerful shot in the area. The Imps were soon to counterattack with Walker using his pace down the wing to beat his man and fire a delivery across goal, Raggett was there waiting though, clearing to safety.

Jake Hesketh was brought off the bench by Appleton replacing Coventry in midfield. Pompey also made a change with Cannon coming off for Cameron McGeehan.

Curtis was the next man in the book, getting a booking for a pulling back Morrell as he was beaten for pace. Lincoln’s Grant was soon to follow getting a yellow for fouling James Bolton.

Portsmouth were awarded a penalty when Curtis was fouled by Eardley following a heavy touch from the Pompey goalscorer. Marquis stepped up to take the spot-kick, comfortably slotting it into the left side just under Vickers, to give them the three points.