It was a night to remember for the Imps as they fired five past Keith Hill's Bolton side. City started the game well with Harry Anderson scoring after just seven minutes. Despite the visitors firing one back early in the second half, Lincoln went on to have an incredible spell scoring four goals thanks to Tyler Walker, Joe Morrell and John Akinde.

City made just one change to their starting XI from the side which travelled to Shrewsbury last weekend, Tyreece John-Jules was replaced by Harry Anderson who returned to Michael Appleton's side following a hip injury. 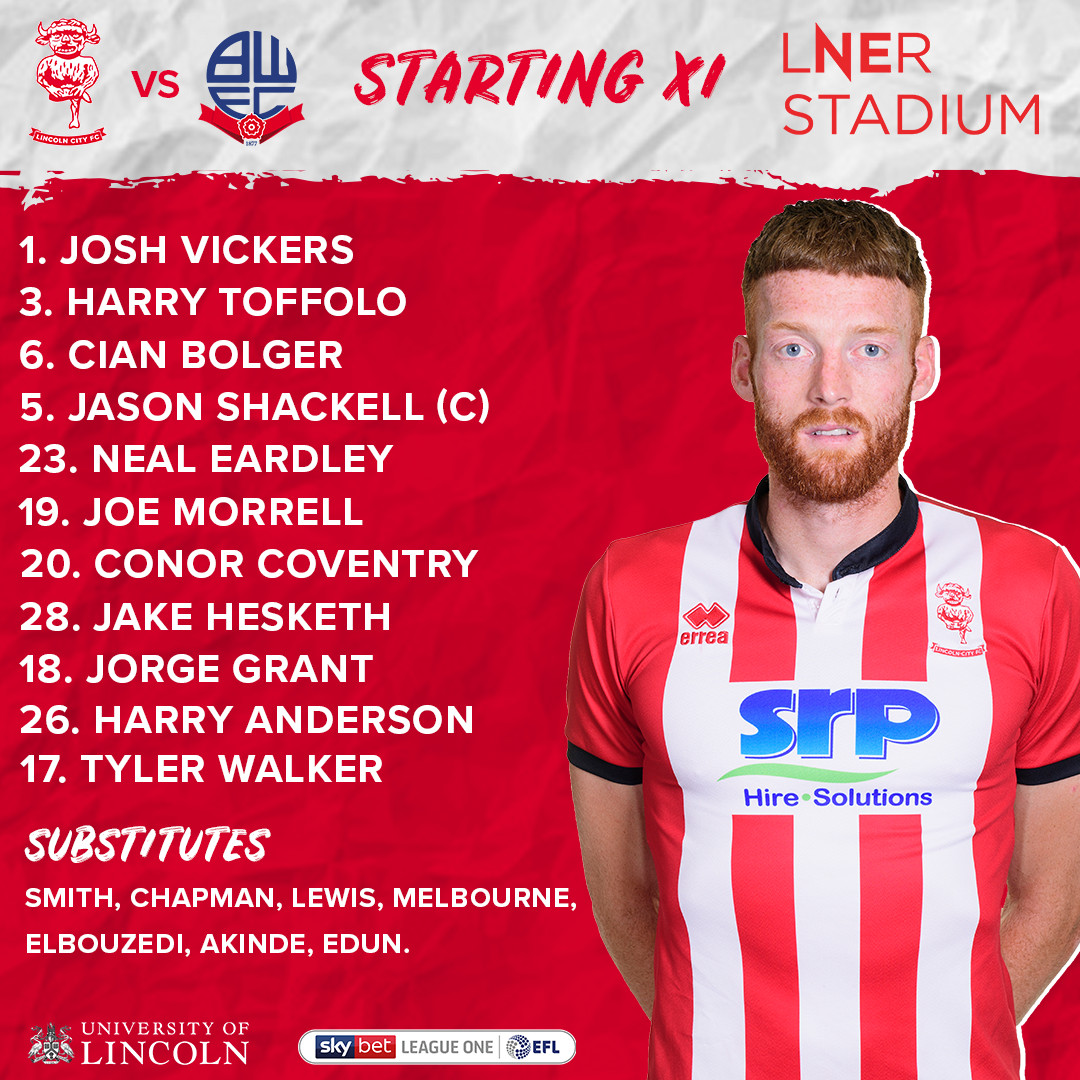 City fans were celebrating early thanks to HARRY ANDERSON who scored the opening goal after just seven minutes in his first game back following a hip injury.

Harry Toffolo started the attack sprinting down the left side before beating his man and producing an impressive cross into the Bolton area. Anderson timed his run perfectly to head home his sixth goal of the season into the bottom left corner giving Remi Matthews no chance in the Wanderers net.

Toffolo was involved in the action on his side again, this time winning a free kick for the Imps in front of the roaring 617 Squadron. Jorge Grant stepped up to take the set-piece and produced a powerful strike forcing Matthews to tip the ball over for a corner.

Grant’s delivery was soon pushed back out to him on the left side of the box, where he played an impressive pass to Joe Morrell who ran through two Bolton men before giving Jake Hesketh the ball. The young midfielder saw his shot blocked and cleared to safety by the Bolton defence.

With the visitors causing no real threat, Lincoln continued to attack looking for their second goal of the game. Tyler Walker forced Matthews into action again as Luke Murphy misplaced his pass, giving the ball to the Imps striker. The forward put his foot through the ball calling the goalkeeper into action to keep the scoreline down.

Bolton started the second half making an attacking change as Chris O’Grady replaced Yoan Zouma who had picked up a knock earlier in the first half.

Ronan Darcy gave the visiting fans something to cheer about shortly into the first half when he received the ball at the edge of the box allowing him to produce a rocket of a shot into the bottom left corner of Josh Vickers’ goal.

Conor Coventry used his vision well as City tried to fight their way back into the lead. The young midfielder played a great ball over the top to Toffolo who fired the ball across goal only to be cleared by the Wanderers defence.

Lincoln thought they had taken the lead again moments later when Walker found himself free in the box, despite the striker finishing well, the linesman held his flag up for offside. The Imps followed by bringing John Akinde on for Hesketh.

City didn’t give up on finding their second, as WALKER was again causing problems for the Bolton defence. Lincoln’s number 17 received the ball on the edge of the ball, before looking up and perfectly placing the ball past Matthews to score his 16th goal of the season.

Vickers made a great save from Bolton’s corner as five Wanderers players crowded the six-yard box in search for an equaliser. The Imps goalkeeper managed to get a glove to the in-swinging corner allowing Akinde to clear to safety.

The Imps had their fans on the edge of their seats with a brilliant piece of attacking play. Toffolo ran at the Bolton defence with confidence before playing a smart pass to Grant on the left, the midfielder then swerved a cross into the box, almost to Walkers feet as Matthews came out of his goal to defend the attack. The Bolton goalkeeper couldn’t get a comfortable hold of the ball, as Morrell received it inside the area, playing in Anderson who saw his shot blocked.

Shortly after, City midfielder Coventry picked up a yellow for a challenge on Luke Murphy in the Imps area.

Bolton had their first real chance following their early second-half goal when Dennis Politic attempted to beat Vickers from distance, the Romanian midfielder saw his shot just fly over the crossbar.

The Imps made their second change of the game when Coventry was replaced by Zack Elbouzedi who made his home debut for City. With the game drawing to a close, Bolton goal scorer Darcy picked up the visiting side’s first booking of the game for a foul Imps midfielder Morrell.

City fans were off their seats for the third time in the game when MORRELL squeezed a shot home from inside the area after Bolton defender Alexander had a mix up with his goalkeeper.

Just as the Lincoln supporters sat down they were up cheering again, this time thanks to AKINDE who scored his 7th goal of the season, with a comfortable stroke home. Aaron Lewis made his league debut for the Imps as he replaced Anderson just after.

AKINDE was off celebrating again in what could only be described as a few minutes of madness. Substitute Lewis had an instant impact as he fired the ball into the box, it was on a plate for the big man who powerfully headed home his second of the game.

With Bolton well out of the game, Keith Hill made his final change of the game as Politic was replaced by Muhammed Faal. However, it was too late for the visiting side as the referee blew for full time after three minutes of added time.

To purchase tickets for the game online - CLICK HERE

Season Ticket holders are reminded that there are no e-tickets issued and that entry will be via season ticket card or by obtaining a printed match day ticket from the ticket office.