John Akinde was the headline maker this afternoon at LNER Stadium as the big striker scored the winning goal against Tranmere Rovers, sealing back to back wins for The Imps.

The big striker thumped the decisive strike off the underside of the bar late in the second half, his sixth of the season, to give The Imps the win over their opponents who looked like they may travel back to the Wirral with a point after playing all the second half with ten men.

Corey Blackett-Taylor was dismissed late in the first half after picking up two yellow cards in just six minutes which made it difficult for Micky Mellon’s men, they defended stoutly throughout the second half but eventually succumbed to increasing City pressure with just under 15 minutes remaining.

The Imps made one change to the team which started the game last weekend in the win over Burton Albion.  Jason Shackell left the field early at the Pirelli Stadium after picking up an injury and that kept him out this afternoon so Michael Bostwick comes in to replace him.

On the bench there are two changes, Ben Coker and Tom Pett are named as subs in place of Aaron Lewis and teh aforementioned Bostwick stepping up to the starting XI.

The visitors to LNER Stadium today gave a debut to Aaron Chapman amongst their line up, the ‘keeper joining on an emergency loan from Peterborough United as their usual man between the sticks, Scott Davies, has picked up an injury. 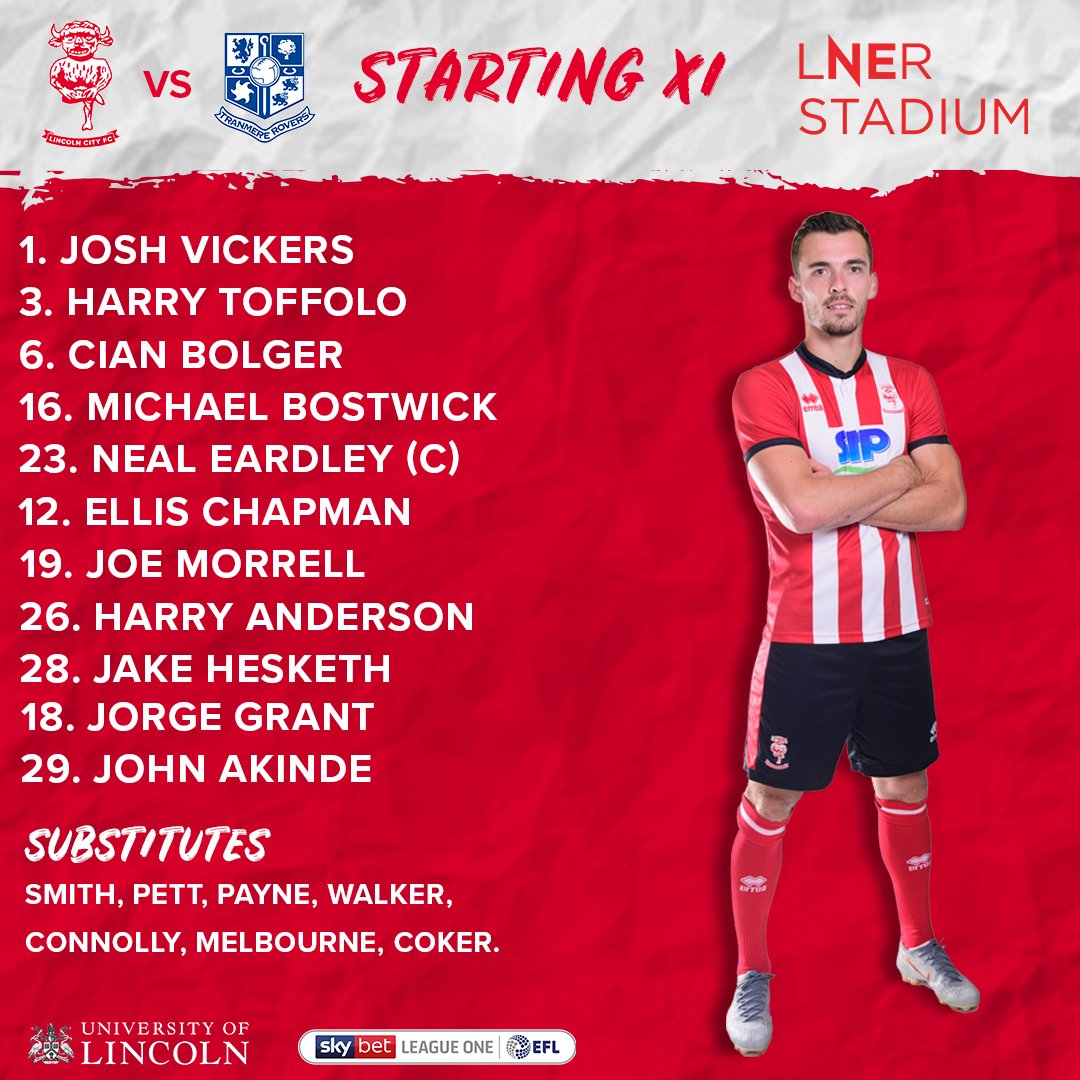 Following a torrential downpour ahead of kick off there was a brisk wind blowing around LNER Stadium as proceedings got underway against Tranmere Rovers.  It was the visitors who were to get the first cross of the game into the box, a deep ball from Liam Ridehalgh was nodded away at the back post by Cian Bolger and the resulting corner followed a similar fate as City defended well to not give the visitors sight of goal.  Harry Anderson linked down the right with Jake Hesketh showing a good touch and vision to find The Imps’ winger but the cross was cut out.

The Imps’ fans were clearly in fine voice for their first home Saturday fixture since early October against Sunderland urging the team forward to try and break the stuttering start to the game which had little pattern to the play from either side. Connor Jennings swung a boot at the ball from the edge of the area to try something different for Micky Mellon’s side, but his shot was always curling wide of goal.

Chances were few and far between but the temperature in the game was still hot, tackles were combative to say the least, Bostwick and Jennings for their respective sides thundering in to try and gain possession.

The Imps were patient in possession but positive, Joe Morrell and Jorge Grant linking with Ellis Chapman the Grant fed Anderson down the right to cross but that was blocked for City’s first corner. It was half cleared before John Akinde looked to race after a ball out on the left but was then penalised for being offside as The Imps started to show glimpses of their attacking intent.

The tempo of the game slowed and as a consequence the number of opportunities had dried up somewhat, however Grant did his part in driving City forward with a fantastic ball switching play from left to right, Neal Eardley combined with Anderson to force a corner which Akinde met but the ball was deflected off target. Eardley was then close to squeezing a cross straight into the goal at the near post as his low ball had Chapman scampering across his goal. Then the visitors almost did the same, Jake Caprice looping a deep cross out on the right which had Josh Vickers backpedalling before tipping the ball over the top.

Tranmere were reduced to ten men a couple of minutes before the break as Corey Blackett-Taylor was sent off after picking up a second yellow card in the space of six minutes, the Rovers number 23 given his second caution for delaying the restart of the game after City won a free kick.

The Imps immediately looked to seize the advantage as Chapman showed a great awareness and touch to take the ball on the corner of the Rover’s box, he curled the ball into the box and Akinde peeled off his marker to connect with the ball but it flashed just wide. With two minutes of stoppage time at the end of the half announced, City pressed for the lead again, Anderson winning another corner which was played across the box Harry Toffolo was waiting for it to come to him and he smashed it first time but the ball flew beyond the frame of the goal.

Neither side made a change ahead of the second half getting underway and when things did kick off The Imps were the first to create an attacking chance, Toffolo whipping in a very dangerous low cross from the left flank which skipped off the turf and Chapman did well to hold the ball.

Rovers immediately attacked down their left and there were appeals for a penalty as Rushian Hepburn-Murphy went down in the box but nothing was given. The Tranmere striker’s pace was an outlet for the visitors and he tested the reflexes of Vickers, play quickly returned to the City attacking third as Chapman tried one from the edge of the box but that went over the top in what was a frenetic five minutes or so of action.

City were having more possession and creeping further and further into opposing territory with each foray forward but the visitors were holding firm. Michael Appleton made a change just ahead of the hour mark, introducing Tyler Walker to the fray with Joe Morrell making way for the striker.

Rover’s were far from out of the game though, the pace of Hepburn-Murphy continued to keep the City defence on their toes but he was finding it difficult to find any room to trouble Vickers’ when he did pick up possession.  Anderson was inches away from putting The Imps into the lead, he turned before cracking a low effort that looked like it took a nick off a defender on the way through, Aaron Chapman dove full length across his goal and couldn’t get there but the ball bounced just wide. Seconds later, Hesketh also had a go, his shot also just off target.

A nice piece of interplay from Walker and Grant freed up space for Eardley down the right, his low ball into the box was just inches ahead of Akinde, Aaron Chapman seemingly concerned about the big striker haring in ahead of him let the ball run and it agonisingly rolled across the face of goal.

Both sides made changes with 15 minutes left, City bringing on Jack Payne for Anderson while Rovers brought on Stefan Payne for Hepburn-Murphy. However, it was Walker who called Aaron Chapman into action as he met an Ellis Chapman cross to head on target, the on loan ‘keeper pouncing on the ball as it bobbled towards goal but there was better to come moments later. 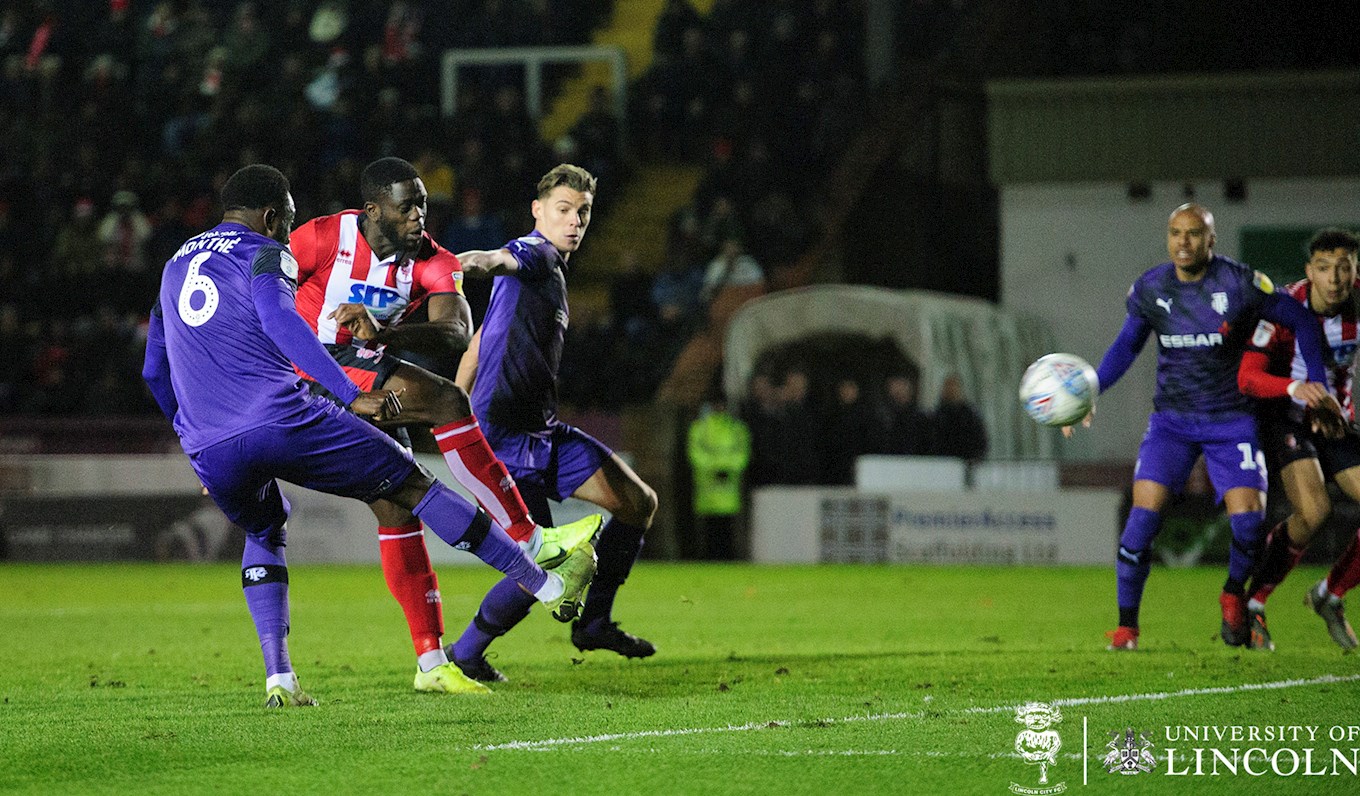 AKINDE was found by Jack Payne inside the box and the big striker put his laces through the ball, hammering it off the underside of the bar, the ball bounced over the line and back out again but the assistant had seen it go over the line and the goal was given.

Rovers pressed for the equaliser, throwing men forward going into the final five minutes but they couldn’t return fire, Caprice fired a effort from a very tight angle over the top and Manny Monthe was denied by a terrific block as the centre back tried to force home from close range.