In just the eleventh league meeting between the two sides it was Coventry City who emerged victorious on a rainy afternoon at St Andrew’s Trillian Trophy Stadium.

It was a real game of two halves in the West Midlands as the hosts went into the lead in the first half through Zain Westbrooke, but in the second 45 it was almost one way traffic from The Imps who dominated but the scoreline didn’t reflect the second half performance come the full time whistle.

The Imps made two changes to the side who defeated Tranmere Rovers as Michael Appleton’s side lined up against Coventry City this afternoon, coming into the side were Michael O’Connor and Tyler Walker with Joe Morrell and John Akinde taking a spot on the subs bench. 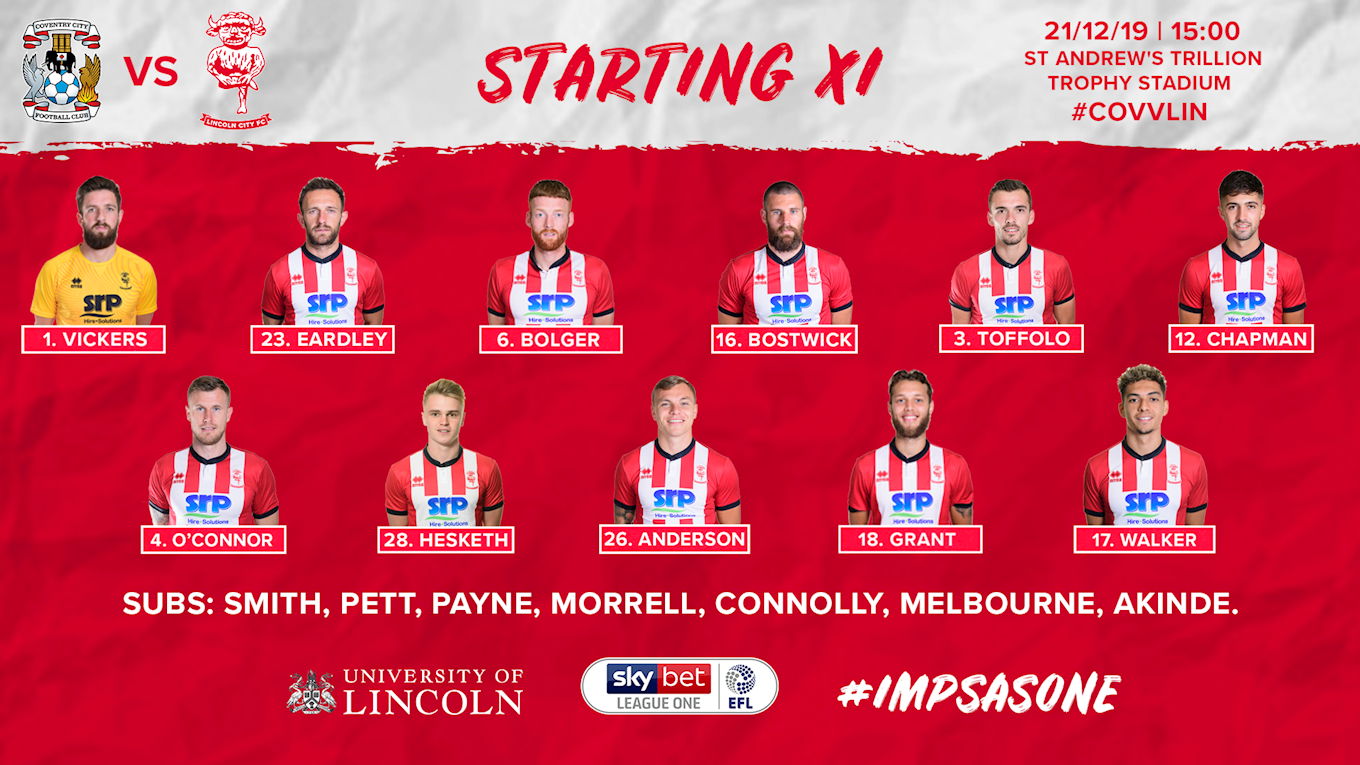 The home side looked to take advantage of the big pitch by spreading play regularly, but City were focussed on the task at hand reducing the Sky Blues to long range efforts.

Jordan Shipley had the first shot in anger, his rasping drive kept rising and went over the bar with Josh Vickers diving to cover before Liam Kelly tried a more measured effort from the edge of the box which skipped wide.

Mark Robins’ side were bounding around the pitch full of confidence in possession but The Imps were far from downbeat, sticking to the task and when on the ball Michael Appleton’s side were just as positive. Down the right, the trio of  Neal Eardley, Jake Hesketh and Harry Anderson worked possession nicely with a series of one touch passes and movement but the threat was just nullified as Anderson was inches away from getting into the box.

Coventry were thwarted by Vickers as quick thinking from the City stopper saw him read a through ball from Kelly which was aimed into the path of Shipley in the box, then he was at it again diving to his right to save a low drive from the Sky Blue’s skipper, Kelly.

The Imps could have been for being a little frustrated as the home side were getting the rub of the green somewhat but in typical fashion there were no histrionics from the visitors who continued to stay resolute and on task. Arguably the frustration was being shown by the home side who just couldn’t get beyond the City defence and again they were forced to try the spectacular, this time Liam Walsh chanced his arm from outside the box only to see the ball follow a similar path, over the top and into The Imps’ supporters behind the goal.

For all the stern resistance shown by the visiting side little could have been done when Coventry took the lead, Kelly nicked possession on the edge of the box and took a stride inside the area then unleashed a drive on target which Vickers did well to save but the rebound went to Zain WESTBROOKE who immediately smashed it back from where it came through a sea of legs, Vickers got down to it but couldn’t keep the ball out of the net.

As a result of the breakthrough the home side tried to extend their lead, but they found Vickers on top form as he tipped over from Kelly. The Imps’ ‘keeper not put off by a torrential rain shower ahead of the break, his save keeping the visitors within arm’s length of a comeback in the second 45.

The Imps came out of the blocks quickly at the start of the second half,  attacking down the left Michael O’Connor linking with Toffolo who crossed but Marosi clung onto the ball with Walker in behind. That attack down the left was the precursor for another attack with the visitors aiming to exploit the right side of Coventry defence but the hosts just managed to keep The Imps at bay.

Spurred on by the travelling support Anderson was denied by Kyle McFadzean and the resulting corner caused chaos in the penalty area. Michael Bostwick fired the ball on target but it was blocked on the line by Marosi then Walker’s attempt struck a Coventry defender and out for a corner. The flag kick was cleared but it was only a brief respite as The Imps came again down the left continuing a blistering ten minutes or so of constant pressure, Hesketh linking with Anderson who unleashed a low skidding effort which went inches wide via a deflection.

The travelling Imps’ fans were in fine fettle behind Marosi’s goal, urging the visitors forward but for all the attacking intent and territorial advantage the hosts were dangerous on the break and it took a smart stop from Vickers to deny Matty Godden who managed to wriggle free inside The Imps’ box.  Michael Appleton made a change just after the hour mark, bringing on John Akinde for O’Connor, signalling his attacking intent for the final 30 minutes or so. 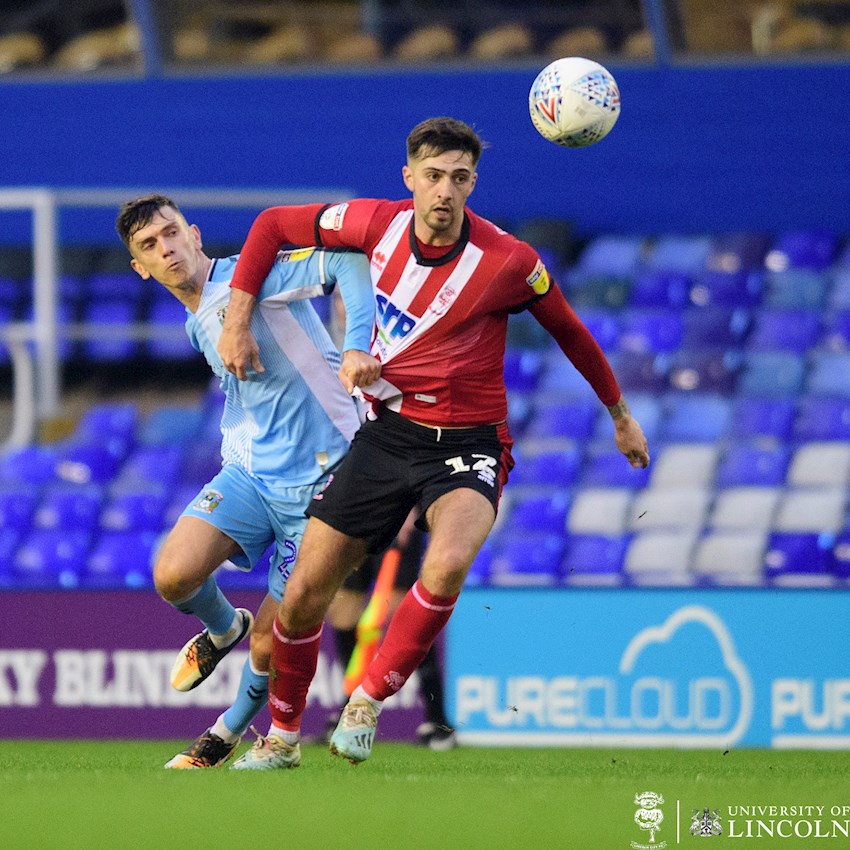 The Sky Blues slowed the game right down, trying to take the sting out of the Imps’ attacking threat, sitting a little deeper, looking for openings rather than being forceful in the final third like they were in the first half. The Imps’ shuffled the pack again as Jack Payne was introduced for Anderson with time ticking away and the hosts were on the back foot shortly after. Hesketh showed great vision to clip the ball over two Coventry defenders, switching play to Eardley, his dangerous curling centre though was headed clear at the near post with Akinde looking to pounce.

The Sky Blues were still forced to try things on the break, and it almost worked, Godden linking with Westbrooke with the former aiming a sidefooted effort on goal which Vickers saved tremendously.  Play reverted back to the other end of the pitch, Toffolo making a fantastic overlapping run pulled the ball back to the penalty spot, the chance was half cleared, The Imps continued in pursuit of the leveller but despite the pressure the hosts were just able to stand firm and take all three points.

Cash turnstiles are in operation for the trip to Coventry City (St. Andrew's Trillion Trophy Stadium) with no price increase.

Non Singing Section tickets can be purchased by clicking HERE

Singing Section tickets can be purchased by clicking HERE

Wheelchair disabled/carer tickets can be purchased by clicking HERE

RedImps travel tickets can be purchased by clicking HERE