The Imps this evening defeated Championship side, Huddersfield Town at the John Smith's Stadium in what will be remembered for a tremendous rearguard action as well as some fantastic team play in West Yorkshire.

Danny Cowley's men made their way through to round two courtesy of Harry Anderson's 55th minute strike, and they certainly deserved to progress. At times the hosts showed their undoubted quality on the ball in periods and forced City onto the back foot but in typical Imps' style the City side battled and fought for every ball right to the last whistle and the win was no more than their efforts deserved.

City made five changes to the side which defeated Rotherham United last time out, there were first starts of the season going to Grant Smith, Ellis Chapman, Bruno Andrade and John Akinde and there was a debut for Aaron Lewis.

The hosts made seven changes to their side and ten in total from their last outing, a 1-1 draw against QPR at Loftus Road in the Championship but still boasted a side packed full of top level experience. 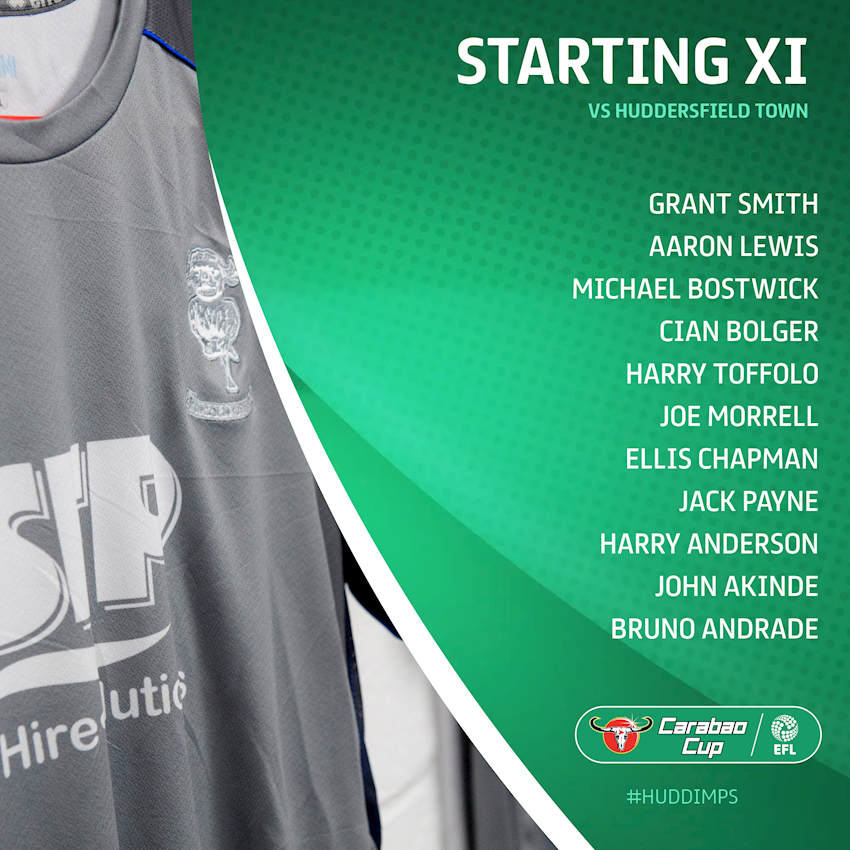 City started brightly although Huddersfield were having much of the possession, The Imps were holding station as disciplined as ever and the Terriers were struggling to find any penetrative balls forward as a result. Bruno Andrade made City’s first burst forward down the left flank and it took two Huddersfield defenders to halt his progress, signalling the intent of the visitors. That attacking intent was also shown minutes later when Ellis Chapman won a free kick in the left corner of the pitch, the ball was swung in by Joe Morrell and Bruno Andrade tried an audacious swivelling volley that Ryan Schofield had to save.

The Imps were more than holding their own and soon troubled their hosts twice in quick succession.

Terrier’s skipper, Elias Kachunga almost turned the ball beyond his own ‘keeper from the next City attack, again a Morrell set piece then Schofield tipped over a powerful Michael Bostwick header which was heading goalwards.  The travelling army of Imps behind Grant Smith’s goal in the first half were in terrific voice and when Akinde got in round the back of the Town defence they were off their seats in anticipation, however, the City striker couldn’t get the purchase in his effort to beat Schofield who blocked as he raced off his line.

The Terriers won their first corner just before the half hour mark and the home crowd were baying for a goal as the ball bobbled around in the area but yet again, nothing came of the chance and City were quickly back up the other end forcing Schofield into two saves. The first coming from a low angled drive from the boot of Andrade, the ball ricocheted to Harry Anderson, but it came too quickly for him to really wrap his foot around it and the Town stopper was there to pick up the second goalbound attempt in a matter of seconds.

The hosts were to succumb to the incessant City pressure on the ball yet again as Trevoh Chalobah was muscled off the ball, Andrade almost profited as his low effort fizzed just wide of the frame of the goal as The Imps continued to show their higher league opponents that they weren’t here to make up the numbers.

Akinde and Anderson were to combine to force the next save from Schofield as The Imps winger lashed a stinging effort on target only to see the custodian of the Terrier’s goal dive to his near post to save.

That save by the home ‘keeper was then met by an equally impressive double stop by Smith in the City goal as Huddersfield came to life just ahead of half time, first Juninho Bacuna fired across goal only to be denied then the overlapping Jaden Brown was too left with his head in his hands as Smith was positioned expertly to save. However, Smith left the best save for last as he stopped a rasping drive from Bacuna, in the last action of a good first half for The Imps.

After the break Huddersfield pressed forward hard and at a much, pushing The Imps back into their own final third but Josh Koroma’s low shot bobbled harmlessly wide of target. City made an early change as Michael O’Connor came on for Morrell and then The Imps were back pressing higher up the pitch winning a corner which found Cian Bolger at the back post but it was inches too high and the City centre back couldn’t direct the ball on target. 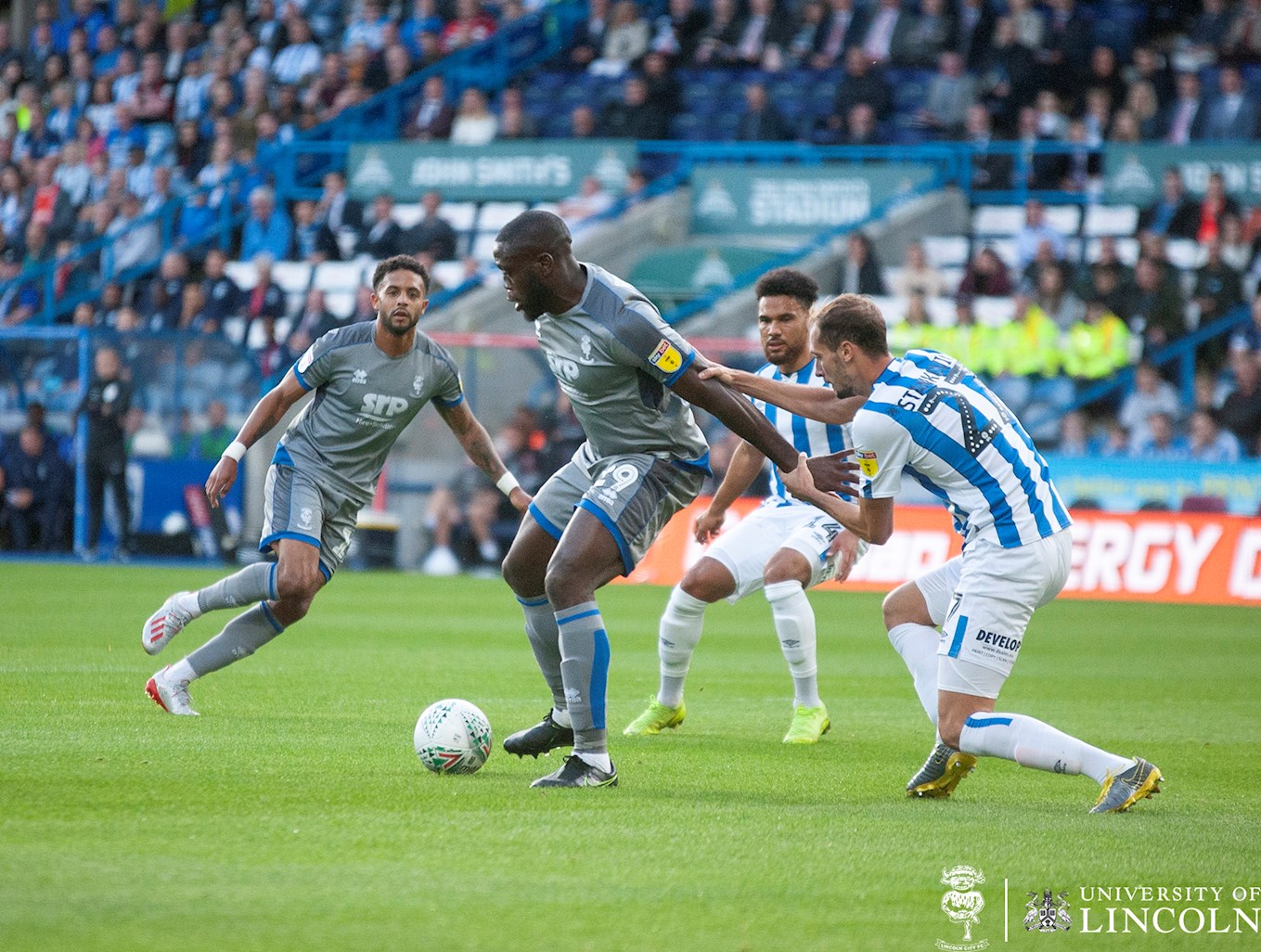 Jack Payne was agonisingly close to bagging the opening goal against his former employers, Andrade pinged the ball into the feet of the City number 10 who took a touch before curling a powerful effort which Schofield had to dive to save at full stretch, Bolger nodded the resulting corner just over the top as Danny Cowley’s men were asking all the questions and the home crowd were getting somewhat restless.

Their unease was doubled in the 55th minute as City took the lead, a tremendous tackle from Akinde winning back possession fed Toffolo and his left foot cross dropped over the Terrier’s defence and there was ANDERSON sidefooting home on the volley.

City’s heart and desire was there for everyone in the ground to see, Payne flashed a low effort wide before Reece Brown did the same for The Terriers with Smith diving to cover his post.

Huddersfield took their time to make another breakthrough and it was Bacuna that was the dangerman, curling a low shot which took a deflection which only helped the ball skid off the turf a little quicker however it went wide of goal. Jan Siewert changed his personnel by introducing Rajiv Van La Parra, hoping the former Wolves winger’s turn of pace and skill could unlock the City door but Bacuna tried his luck only to see Smith stood firmly in the way of his effort.

The Terriers then introduced Steve Mounie with just over ten minutes remaining as they began to throw caution to the wind in search of the equalising goal to send the game to penalties at the very least. Toffolo and Tyler Walker, who came on as a sub for The Imps was then to create a chance for Payne which the former Terrier couldn’t force home from almost under the crossbar. The close call roused the home fans who raised the volume higher than they had all game as proceedings ticked deep into the final ten minutes, but the cheers changed to groans when Herbert Bockhorn smashed the ball high over the top with just five minutes left. The Terriers were pushing forward with alarming regularity and Van La Parra was denied by Smith before a loud call for handball was waved away by the referee, then Mounie was guilty of nodding arguably the home side's best opportunity wide of the mark.

That miss was one which the home supporters would rue as it was Danny Cowley's Imps who progressed through to Round Two of this season's Carabao Cup.