Lincoln City maintained their unbeaten away league start to the 2018/19 season with a 2-1 win over Macclesfield Town last weekend. The Imps host MK Dons this Saturday as they look to build on the win at Moss Rose.

Jason Shackell scored the winning goal for Danny Cowley’s side in the 87th minute as they travelled to Moss Rose last Saturday. In-form midfielder, Tom Pett also found the back of the net for City, opening the scoring after 21 minutes.

The Imps have now scored 16 goals in eight league games as they continue to lead the SkyBet League Two table. Cowley’s side have won six of their opening eight fixtures. 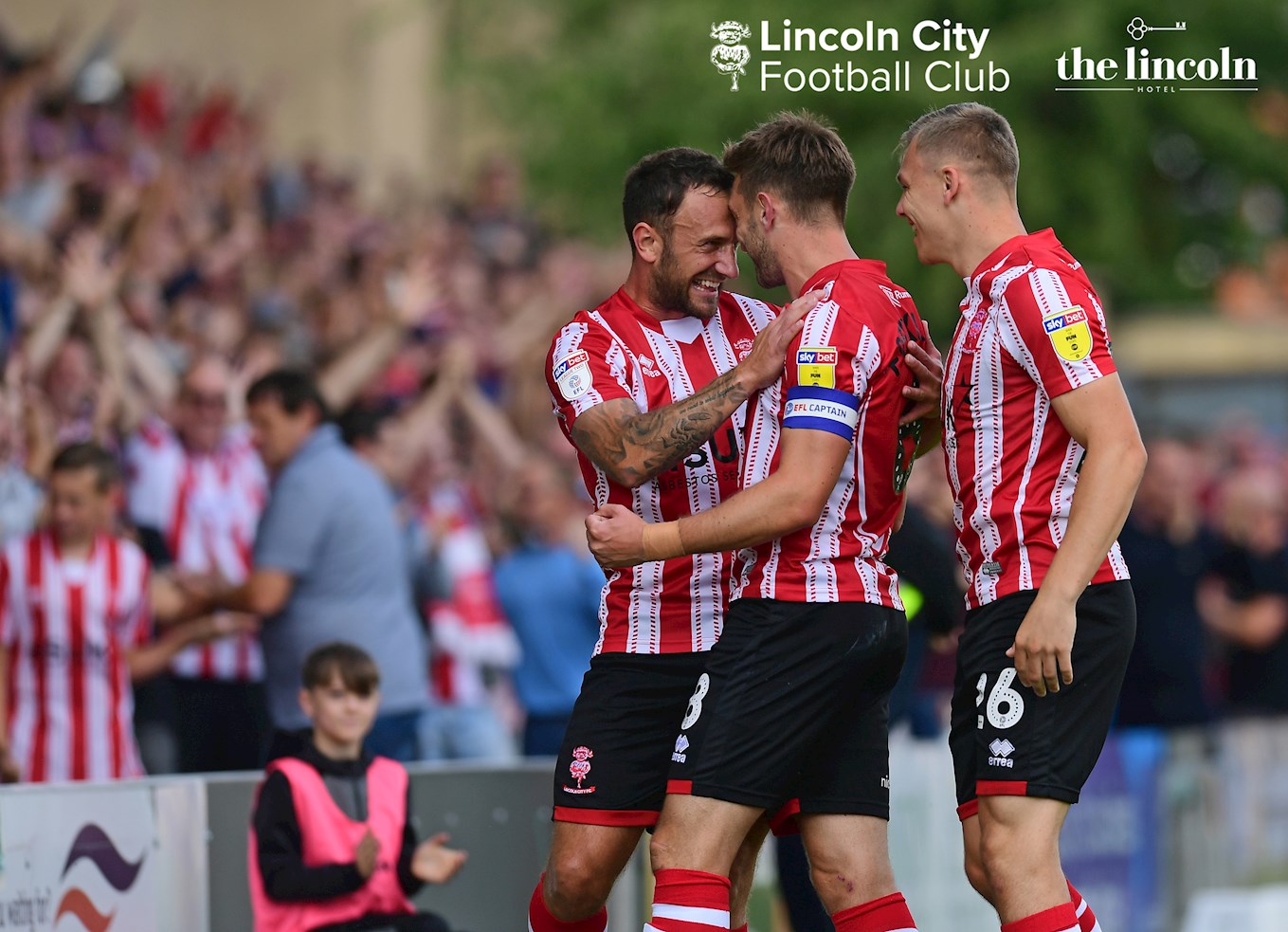 The Dons who were formed in 2004 faced Premier League opposition AFC Bournemouth earlier this season in the Carabao Cup. Paul Tisdale’s side lost 3-0 on the day with goals from Lys Mousset, Ryan Fraser and Jordon Ibe.

MK Dons are currently 9thh in the SkyBet League Two table, only just missing out on a play-off place through goal difference. Having won three of their opening seven fixtures, the Dons are currently one of two unbeaten sides in the league, the latter being Forest Green Rovers who they drew with last weekend. 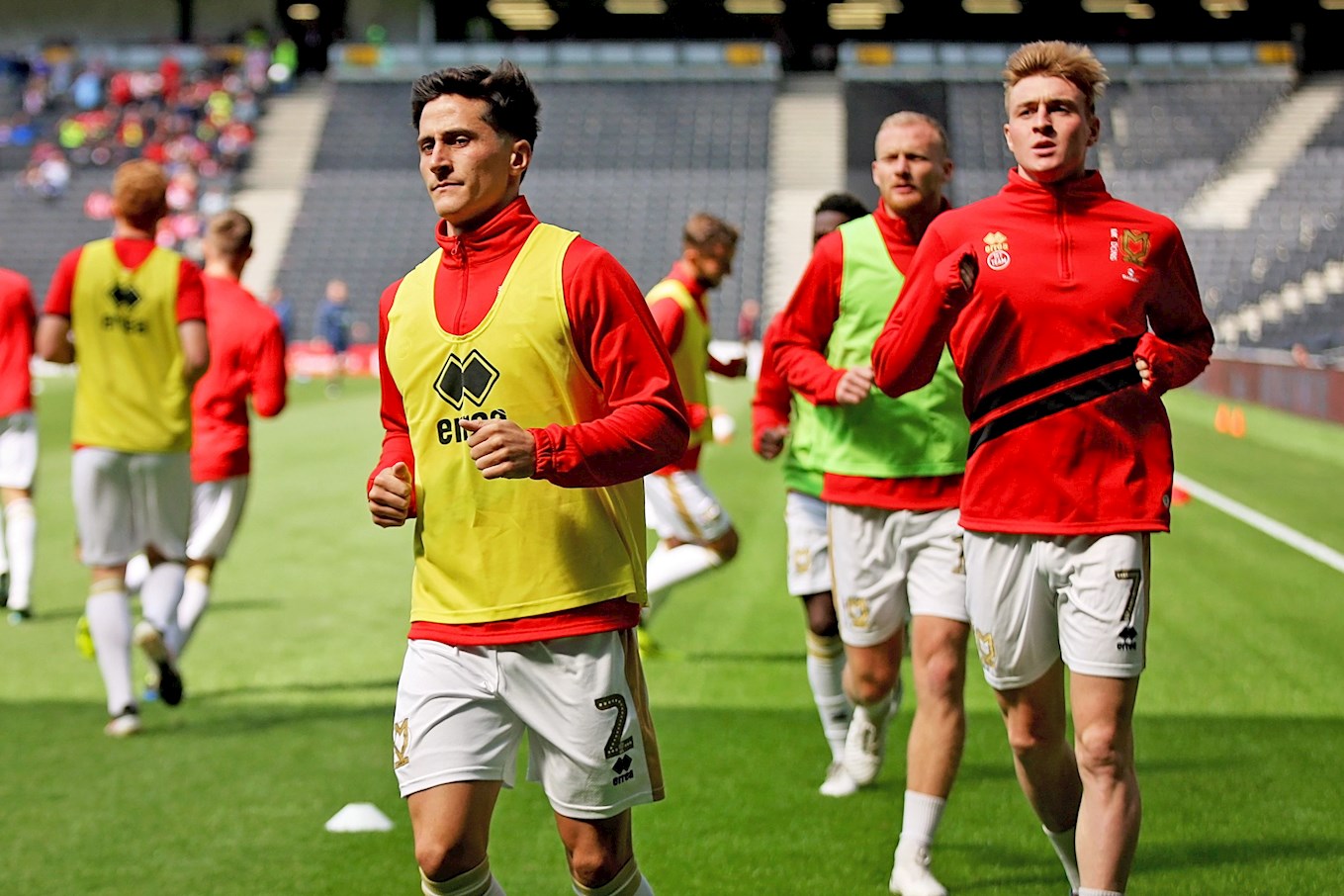 MK Dons manager, Paul Tisdale arrived at the club this summer following a 12-year stay at Exeter City. The Maltese-born manager spoke to press ahead of Saturday’s clash: “We want to play better than we did last Saturday. I want people in the stadium to enjoy what we do, we’ve done well so far but we need to up our game.”

Tisdale went on to discuss Danny Cowley’s side saying: “Lincoln are at the top of the league and the early pace setters. It’s going to be a great atmosphere and it will be a good test for us. It looks like a testing few games coming up. This time next week we’ll have a good indication as to where we sit.” 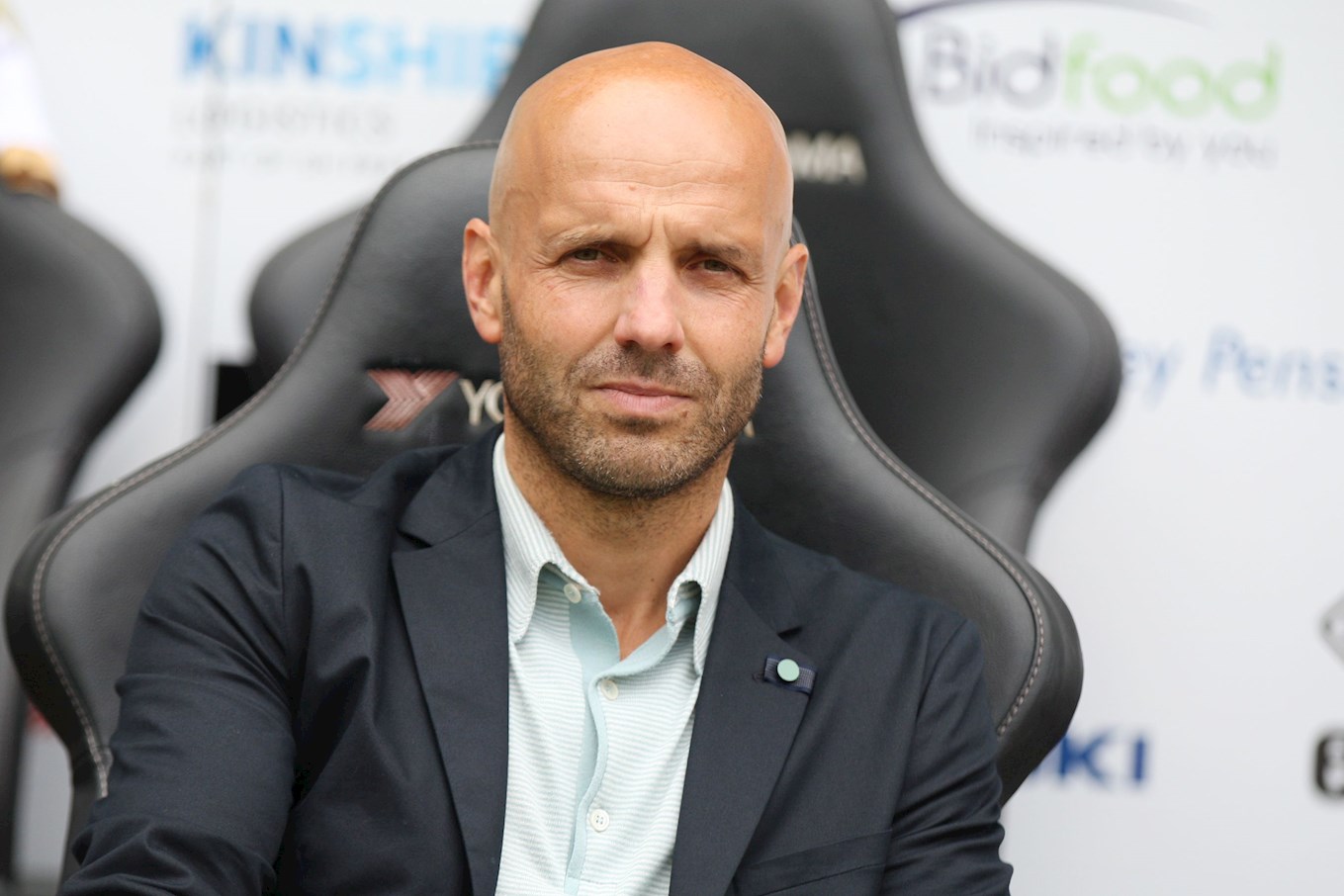 The last time the two sides met was in April 2008 when both clubs were in League Two, it was a disappointing game for the Imps as they lost 2-1. German-born striker Ben Wright was on the scoresheet for the Imps but goals form Carl Regan and Jemal Johnson gave the Dons three points.

Lincoln last picked up points against MK Dons in January 2007 when the sides drew 2-2 in front of 7,140 people at the National Hockey Stadium. 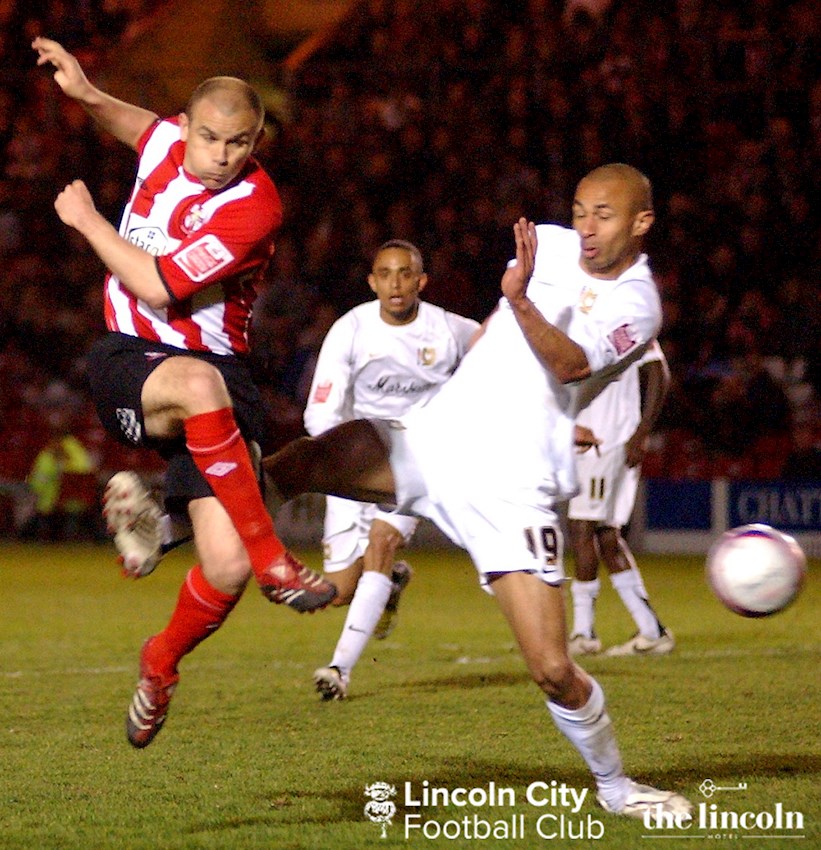 One to Watch – Kieran Agard

The forward made his Premier League debut in December 2009, coming on as a sub for Louis Saha in a 3-3 draw against Chelsea. Agard was released from Everton at the end of the 2010/11 season following loan spells with Peterborough United and Kilmarnock.

After a season with Yeovil Town, the forward joined Rotherham United where he made 78 league, scoring 27 league goals over two seasons. Agard was part of the Rotherham side who won back to back promotions between 2012 and 2014.

MK Dons broke their club-record transfer fee in August 2016 when they signed Agard. The 28-year-old scored a brace on his debut for the club in a 2-2 draw with Millwall. This season Agard has scored two league goals as well as picking up one assist in seven games. 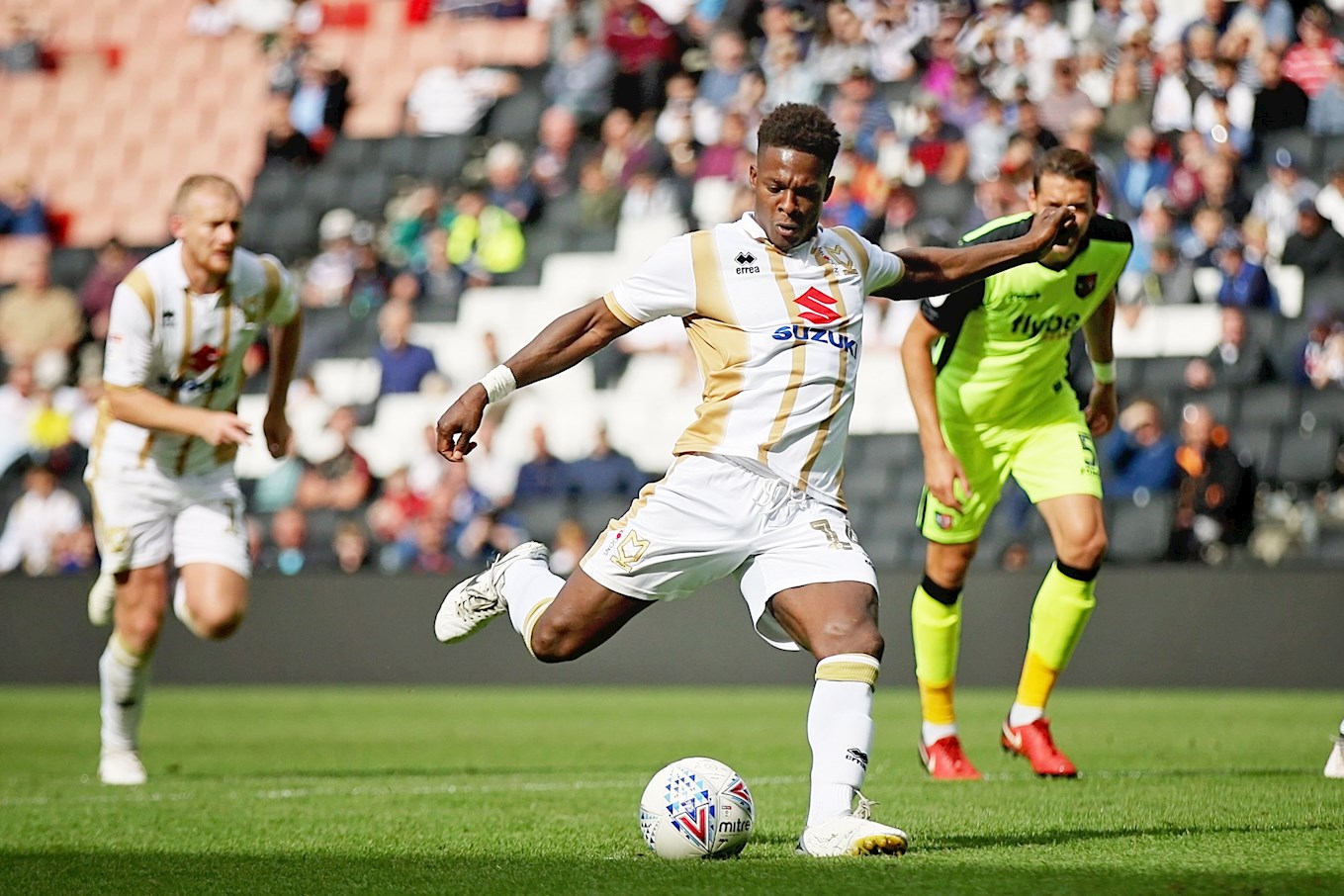 The Imps were to take all three points at Sincil Bank this afternoon as Jason Shackell scored an injury time winner after City came from behind to defeat MK Dons.

The visitors went ahead in the second half through sub, Rhys Healey but The Imps hit back through Shay McCartan before Shackell scored his second winning goal in two games.

Led out by Imps’ fan Tim Smith the sides were welcomed by a wall of noise from the almost sell out crowd at Sincil Bank. Josh Vickers made a return to the starting eleven after recovering from injury, there was also a return for Neal Eardley at right back.

City almost created a goal within the first couple of minutes of the game getting underway, John Akinde playing a slide rule pass through the heart of the Dons’ defence for Shay McCartan but Lee Nicholls was to race from his goal line to smother the ball. McCartan was again foiled by the Dons’ ‘keeper moments later, this time he did enough to force the Northern Irishman wide of goal.

Nicholls was a thorn in the side of City as he denied McCartan for a third time with only six minutes gone, Eardley clipped the ball to Akinde who played a wonderful first time pass to Harry Anderson, his shot was deflected into the path of McCartan and he somehow managed to acrobatically turn it goalward and the Dons’ ‘keeper stretched every sinew to tip the effort over the top.

Dons weathered the initial storm but City remained in possession for the most part, the away side though did get a shot away which Vickers watched fly by, Ousseynou Cisse with an ambitious volley from 25 yards following Michael Bostwick’s clearance following a Dons right wing centre.  The pace of the game was incessant, The Imps flew forward down the left through Bruno Andrade and following a foul on McCartan, Harry Toffolo curled a clever free kick round the wall into the heart of the area, it skidded through the penalty area and Nicholls did well to grasp as it flew by the bodies ahead of him.

City kept knocking at the door, showing patience in attack waiting for the opportunity to pounce and with their fourth corner in the first half the ball was to come when Bostwick met a left wing corner from Andrade, but the ball was to flash just wide of the far post.

Dons though were holding station despite being on the backfoot for much of the game, a swift move down the right found the feet of Ryan Watson who let fly from outside the area, Vickers diving quickly down to his left made a wonderful save, deflecting for a corner. Chuks Aneke then headed the resulting corner over the top with Vickers in close attendance, doing more than enough to force the Dons’ number 10 into the miscue.

The home supporters were doing everything they could, urging The Imps forward and the team were pressing high and forcing errors from the Dons, Akinde almost profited from a loose ball by Cisse, the City top score was denied by a vital block from Jordan Houghton, getting enough on the ball to see it skid wide of target.

Winning the ball back on halfway, Eardley dinked a ball forward which Jordan Moore-Taylor misjudged and McCartan was off chasing, out came Nicholls and did enough to force the hurried effort that looped over the top of the bar.

With the words of Danny and Nicky Cowley still in their thoughts, City were pressing high right from the restart, forcing MK Dons back into their own area. But the away side were organised as ever, slowing regaining composure before making their way forward, Alex Gilbey hit a low drive straight into the heart of the City area which was out of the reach of Vickers but it was deflected wide of the goal with Aneke trying his best to get there.

The tempo of the game was still very quick, Anderson doing very well to get to the ball ahead of Joe Walsh, then put a deep cross to the back post where Andrade headed into the danger area but MK hacked the ball away. Akinde was then put off just enough by Taylor-Moore and the City man couldn’t keep his header down.

The game was following the pattern of the first 45 minutes with City arguably having the upper hand without managing to break the deadlock, but that pattern was broken when the visitors did get on the scoresheet. Sub, Rhys Healey managing to get the better of Jason Shackell to break into the box and smash low into the far corner of the goal. Within minutes City were inches away from getting the equaliser, Akinde firing a low bouncing ball which had Nicholls beaten but the City striker was left holding his head in his hands as it crept just off target.

The Imps’ supporters turned up the volume yet again and Eardley went close with a rising drive that went over the top as the home side kept thundering forward. Andrade took control following a nice bit of close control from Tom Pett, the winger curled in a tantalising low cross which left Nicholls unsure whether to stick or twist, but there wasn’t a player there at the back post. There was nothing the MK ‘keeper could do though when the next chance came the way of The Imps.

A deep free kick was played in to the back post, Akinde rose highest to nod down and there was McCARTAN to smash home back across into the far corner, sending the home fans into raptures, quite the finish for his first in a City shirt.

The Imps were hungry for the winner, MK were hanging on. Jason Shackell almost headed a Toffolo corner home but somehow it was kept out of goal, a second successive flag kick was just diverted from goal.

The clock ticked towards full time and both sides were still going at it hammer and tongs, neither side settling for a point, Andrade cutting in from the right tried to find the far corner but his effort went wide. Akinde nodded just wide from a Bernard Mensah cross with City throwing caution to the wind in the final few minutes of stoppage time. The game was stretched as a result, Osman Sow nodded a deep cross into the arms of Vickers as the ball went end to end very quickly.

In the dying embers of the game, City were to get a final chance and how they took it. SHACKELL leaping highest to nod home his second goal in as many games and secure all three points and solidfy City’s place atop Skybet League Two.

At 7pm this evening an extra allocation of tickets for tomorrow's game against MK Dons will go on sale to Imps' supporters.

The extra tickets are to be released for sale in the Stacey West Stand as MK Dons have not sold all their allocation of tickets, allowing a further limited number of tickets to go on sale to City fans. With well over 8,000 tickets already sold the game is nearing a sell out in home areas.

If you haven't yet purchased your ticket for the game, this final allocation of tickets for supporters will go on sale tonight from 7pm via Eventbrite and you can get yours by clicking HERE