Danny Cowley’s side continued their impressive form with a 2-1 home win over MK Dons last weekend. Summer signing, Jason Shackell scoring another late winner for Lincoln City as they picked up their seventh set of three points this season.

Shay McCartan also scored for the Imps, equalising in the 72nd minute after MK Dons’ Rhys Healey opened the scoring eight minutes prior. The Northern Ireland international netting his first goal in competitive action for the club after arriving on loan from Bradford City during the summer transfer window.

Cheltenham Town returned to the Football league for the 2016/17 season after winning the 2015/16 National League title. The Robins finished 17th in the league last season with Billy Waters scoring 16 goals in all competitions.

Town have failed to claim three points in their previous two league games, the side’s last win came against Northampton at the start of the month when the Robins put three goals past struggling Northampton.

Last weekend, Michael Duff’s side travelled to Exeter City where they threw away a 1-0 lead to end up losing 3-1. The Robins had scored in the 42nd minute, going into half-time as leaders, however Exeter quickly fired back in the second half with Pierce Sweeney scoring one minute into the second half.

Jayden Stockley scored the winner for The Grecians with ten minutes remaining, their lead was extended eight minutes later by former Southampton striker, Jonathan Forte scoring his third league goal of the season.

Earlier this season, Cheltenham faced SkyBet Championship opposition Brentford in the Carabao Cup. French defender, Julian Jeavier scored the only goal of the game for The Bees forcing Cheltenham out of the cup in the second round.

Cheltenham manager, Michael Duff has been at Whaddon Road since 10th September 2018 following the departure of Gary Johnson earlier in the season.

Duff made over 300 appearances for Cheltenham during his playing career before moving to Burnley in 2004. The 40-year-old spent 12-years with The Clarets before becoming their Academy Manager in 2016.

Speaking to press ahead of the Robins’ clash with Lincoln, Duff praised his opposition manager saying: “Lincoln are top of the league and Danny Cowley has done a good job. He has brought some good players in and they have started well. It's a tough one and we know that.”

"I think everyone knows you have to stand up against Lincoln and if you are not prepared to fight, they will run over the top of you.

“That's one thing the players will be made aware of, that they need to stand up physically and mentally and then have the confidence to get on the ball and play as well,” explained the former Northern Ireland international.

Speaking about his side’s start to the season, Duff finished by saying: "It's the early stages and it's not going to be a quick fix. The weeks that we've had in between games have been important and the players have taken things on board." 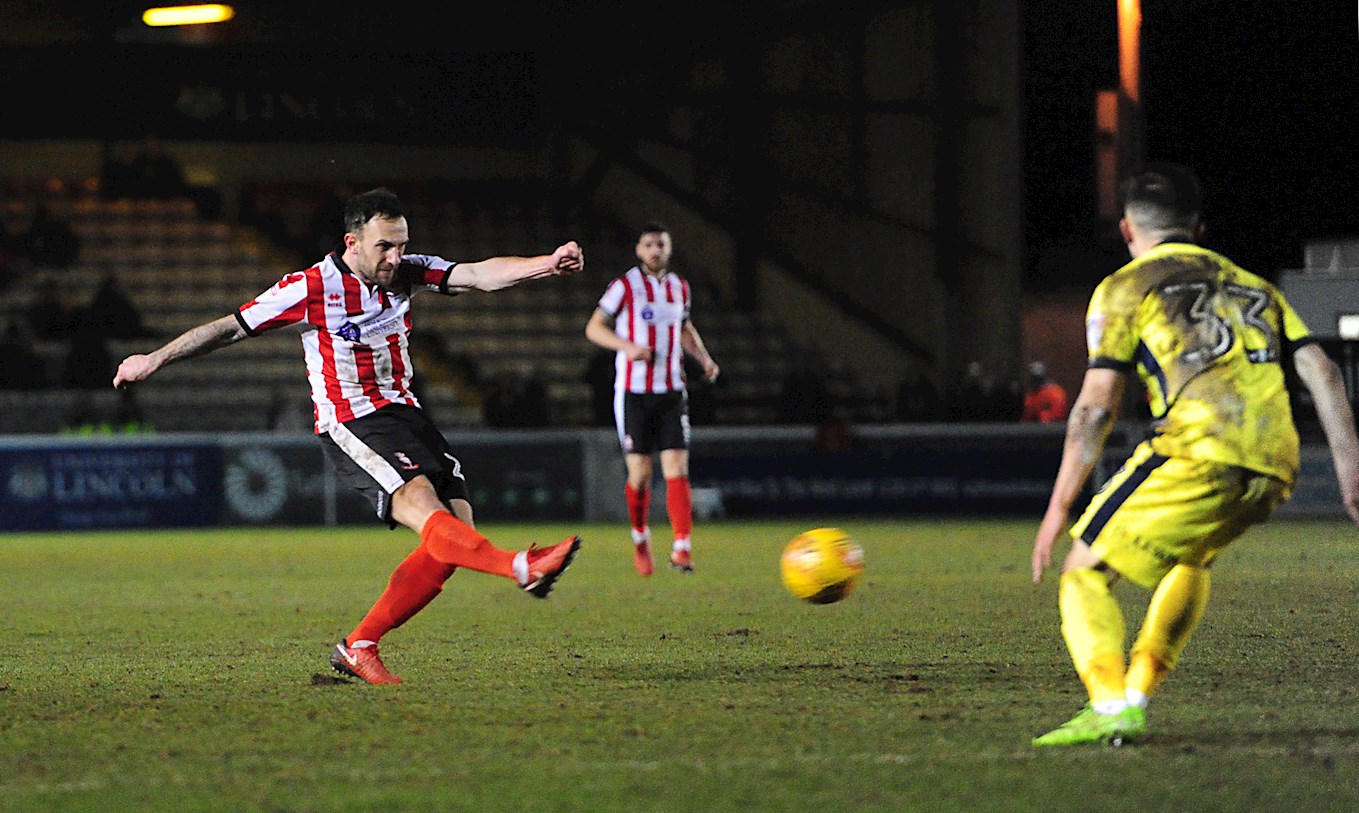 The last time the two sides met was last season, the Imps came out on top with a 1-0 victory thanks to a goal from Neal Eardley. The former Welsh International picked up the Imps’ player of the season award last year which was followed by a new deal keeping him at Sincil Bank until 2020.

However, Cheltenham also picked up a 1-0 win when they hosted City last season in October 2017. Daniel Wright found the back of the net for The Robins on the day. The former Wrexham forward scored three league goals for Cheltenham during the 2017/18 season.

One to Watch – Scott Flinders

Currently Cheltenham Town’s number one, Scott Flinders is in his second season at Whaddon Road.

The shot-stopper started his career at Barnsley before moving to Crystal Palace in 2006. After a number of loan spells at clubs such as Brighton & Hove Albion, Blackpool and Falkirk the former England U20 signed a permanent deal at Hartlepool United in 2009.

During his time with the Monkey Hangers, Flinders made over 250 league appearances for the club. The former Gillingham loanee became the first goalkeeper to score from open play for Hartlepool when he scored a header in the 94th minute against Bournemouth earning a point for United.

Flinders nearly scored a second goal for the club against Walsall in August 2011. The goalkeeper’s 70-yard clearance bounced over Jimmy Walker, however Colin Nish tapped the ball over the line scoring his first for the club.

City made it three wins out of three as they defeated Cheltenham Town with two goals in the second half at the Jonny Rocks Stadium to stay at the top of the Skybet League Two table.

The deadlock was broken when Cheltenham’s Craig Alcock put past his own goalkeeper, before a second goal in as many games for Shay McCartan extended the lead and sealed victory.

The Imps fielded an unchanged starting eleven from the side which defeated MK Dons last weekend, the only change in the matchday squad being the return of Scott Wharton from injury as he replaced Kellan Gordon on the substitutes bench. The game got underway under the bright autumn sunshine and the travelling City fans behind Josh Vickers’ goal in the first half were their usual buoyant selves.

Chances were limited at either end of the pitch with neither side able to really get into their groove in a quiet start to the game, defences were on top and it took a moment of quality from Shay McCartan to open up a chance for The Imps as he danced his way past two players only to be unceremoniously brought down. The Northern Irishman got to his feet to take the free kick and the ball cleared the wall, Scott Flinders scampered to his left and was grateful to see it slide just wide of the upright. City were growing in confidence and it was highlighted by Bruno Andrade who showed great skills to shake off the attentions of Jordon Foster to clip in a dangerous cross which Harry Anderson couldn’t keep under control before Neal Eardley floated in a delightful ball but the home side managed to clear. City were beginning to turn the screw, McCartan close to creating a chance for Andrade who raced in from the back post but the Robins poked the ball clear.

Andrade was to create another chance, once more beating Foster and sliding a ball to the back post where John Akinde raced in, but the striker was unable to turn home the opportunity. The close call seemed to invigorate Cheltenham, they pressed forward with a little more intensity, City’s defence however remained unruffled.  Akinde fired a shot just off target, and McCartan was inches away from getting on the end of an almost perfectly executed free kick that caught the Robin’s defence somewhat flatfooted.

City’s ability to run with the ball was constantly putting Cheltenham on the back foot as they struggled to contain the marauding Akinde, McCartan and co but the scoreboard remained unchanged come the half time whistle

City started the second half positively, pressing high up the pitch and Andrade was involved yet again, shooting just wide with the aid of a deflection before Michael Bostwick tried a measured curler which was well stopped by Scott Flinders. The Robins’ ‘keeper was then quick to pounce on a dangerous centre from Eardley, just getting there ahead of the onrushing Anderson.

The Imps continued on the front foot as Akinde showed great strength to hold off his marker on halfway before slipping in Anderson down the right, he held things up to Eardley who whipped in a dangerous cross, Tom Pett hared in but just missed making the connection for what would have been a majestic goal. Anderson then was to put in a dangerous ball which McCartan sidefooted towards goal but it struck the unlucky Akinde on its way through taking the sting out of the effort and Flinders gleefully clutched the ball to his chest.

Josh Vickers had cut a lonely figure at one end of the field for much of the field, his only real involvement being a claim from a corner in what was a rare Robin’s foray into City territory for the hosts in the second half.

Just as the home supporters were getting behind their team hoping to break the deadlock, The Imps were to break their hearts with a wonderful breakaway goal. O’Connor did well in central midfield, Akinde then fed the ball wide to Andrade who slid in the overlapping Harry Toffolo whose first-time centre was turned past his own ‘keeper by the unfortunate Craig Alcock.

The goal breathed new life into the Imps who went looking to strike the killer blow, pressing forward with a new intensity and the Cheltenham Town defence buckled. Andrade smashing a effort from outside the box which Flinders did well to save but McCARTAN swept home the rebound from close range.

Anderson broke into the Robins’ half at pace, getting the better of Alcock to get a shot away that skimmed across goal which O’Connor lunged at but he was inches away from the decisive touch for a third goal. But it wasn't to be a chance rued as City saw out five minutes of injury time, sending the 754 travelling away supporters home happy.