Lincoln City host Mansfield Town this Saturday in their 18th league game of the season. The Imps are currently second in the SkyBet League Two table with 36 points to their name, however they have a game in hand over league leaders MK Dons who have 37 points.

City had their SkyBet League Two fixture against Yeovil Town postponed last Saturday due to the Glovers having a number of players called up to international duty.

Danny Cowley’s men were last in action when they hosted Northampton in the first round of the FA Cup two weeks ago. The Imps won 3-2 in dramatic style thanks to Bruno Andrade’s 92nd minute winner.

Inform Reece Brown equalised for the visitors just four minutes after Akinde’s opening goal. On-loan youngster Kellan Gordon made an instant impact coming off the bench and scoring his first Imps goal as he netted City’s winner in the 72nd minute.

Mansfield Town have been on an impressive unbeaten run winning five of their previous 11 SkyBet League Two games. Their last defeat came against Exeter City in September when Tyler Walker scored a consolation goal in the 61st minute.

The Stags suffered defeat to Charlton in the FA Cup first round replay on Tuesday night losing 5-0. They had previously held the SkyBet League One side to a 1-1 draw at Field Mill on Remembrance Sunday in the original tie.

The Iron managed to bring the score back to 2-2 in the 89th minute before former Slovenia U19 star Timi Elšnik scored the winner for David Flitcroft’s side in the 90th minute.

David Flitcroft spoke to the press after the Stags' 5-0 defeat in their FA Cup first round replay at Charlton Athletic on Tuesday.

The former Swindon boss said: “MK Dons, the way they play, they’re the team to be reckoned with for me. Lincoln have been consistent with what they’ve done this season.

“They’ve won a lot of football matches and have done a lot of winning. We just want a referee that’s strong. It’s a place that’s been built up and has that noise and atmosphere.

“It’ll be a tough task but we are excited by the challenge and I will look forward to going in there and competing.”

The last time the two sides met was in the Checkatrade Trophy when Lincoln hosted Mansfield in September. The visitors won 2-1 despite Matt Rhead opening the scoring after just six minutes.

A similar situation happened during the 2017/18 Checkatrade Trophy when The Imps travelled to the One Call Stadium, however Danny Cowley’s side came out as winners in the group stage.

Lincoln went on to win the trophy at Wembley last year when they beat Shrewsbury 1-0 thanks to Elliot Whitehouse’s 16th minute strike.

One to Watch – Tyler Walker

Currently fourth in the SkyBet League Two scoring charts, Tyler Walker will be the one to watch for Mansfield this Saturday.

Walker has scored eight goals and picked up two assists as well as having a 50% shots on target ratio from his 44 this season.

The 22-year-old is the son of former England defender Des Walker and has been capped by the Three Lions U20 side on seven occasions, scoring a brace against Czech Republic in 2015.

The young forward is currently on loan at the One Call Stadium from SkyBet Championship side Nottingham Forest. Walker has scored four goals in 33 league appearances for the Reds, a team he joined at the age of 10.

The points were shared in a breathtaking game at Sincil Bank between The Imps and Mansfield Town, it looked like the home side would be the winners but a last gasp leveller from the visitors was to earn The Stags a point.

Kellan Gordon came off the bench to score what looked like to be a winning goal for City but Jacob Mellis lashed home an equaliser deep into stoppage time for the visitors.

It was a white hot atmosphere welcoming the two sides out at Sincil Bank this afternoon, over 9,000 supporters packed inside the stadium awaiting kick off.

The Imps got off to a quick start, winning a corner within the first minute of the game, Michael O’Connor pinging it into the danger area and immediately causing havoc in the heart of The Stag’s defence as it took a couple of attempts for the visitors to clear.  Both sides were keen in the challenge in typical derby day fashion as play went on at a frenetic pace.

Shay McCartan showed CJ Hamilton a clean pair of heels down the right flank and got into the box but Matt Preston just managed to get infront of the City player’s attempt to feed John Akinde who was haring into the danger zone. Akinde then almost became provider with another attack coming down the right, once again the centre was cleared.  Mansfield responded through Danny Rose, the diminutive centre forward creating space to curl a low shot on target from the edge of the box which Josh Vickers threw out a strong left hand to save and deflect clear.

You couldn’t take your eyes of the game, epitomised by Akinde’s workrate and effort to force Stag’s ‘keeper Robert Olejnik into a hurried clearance which fell to Bruno Andrade, the City number 11 tried to angle a shot into the almost unguarded net but it rolled agonisingly across the face of goal. Michael O’Connor twice fought to win back possession and drive The Imps forward as play started to slowly take place more in the Mansfield half.  The only riposte from The Stags being another effort from Rose, this time though it didn’t trouble Vickers’ goal.

The Stag’s halted City’s progression forward somewhat, but in they weren’t able to get into Imps territory as a real tussle for supremacy in the centre of the park became the feature of the game. O’ Connor and Tom Pett along opposite their counterparts Jacob Mellis and Neal Bishop thundered into challenges trying to create something for their attackers. The temperature in the air dropped but the on-pitch action was keeping the supporters warm with both sets of supporters vociferous in their backing of the players.  McCartan’s pace and movement was frightening the Stag’s defence and he almost created a chance from nothing as he was shadowed by three visiting defenders, his low cross just striking the sliding Mal Benning with Akinde lurking a yard or so behind him.

City flew out of the traps following the restart, pushing forward within seconds of the kick off and almost found a way to goal with Akinde in the thick of the action down the right channel, Eardley too getting involved as he swung a cross into the box which Olejnik had to claim.

O’Connor slid Andrade in down the left, he jinked inside and out before creating space for a low shot that skipped off the turf which Olejnik did well to grasp, the Stag’s ‘keeper was called into action moments later. Akinde racing down the right getting onto Eardley’s pass, holding off the attentions of his marker before smashing an effort that Mansfield’s stopper deflected wide.

Up the other end, Jason Shackell stopped the visitors in their tracks, making a fantastic challenge on Mansfield sub, Otis Khan, as he shaped to shoot following a neat one two with Jacob Mellis inside the City area. As the ball continued to swing from one end of the pitch to the other, a crescendo of noise followed the action from both sets of supporters as the action was once again relentless.

Eardley delivered an inviting cross into the heart of the box which Matt Preston just got to as City piled forward in search of the opening goal with just over an hour gone. McCartan was clipped on the left hand edge of the penalty area giving The Imps a chance to put the ball into the box, O’Connor elected to shoot from an unlikely angle and Olejnik palmed the ball over the top for a corner.  Mansfield only half cleared, Bostwick winning the header outside the opposition box, McCartan hooking the ball to Pett, his first time cross was headed powerfully just over the top by Akinde. The Imps won another corner as the pressure continued to build, but somehow the visitors managed to stave off the threat.

The visitors then won a corner of their own but Vickers claimed majestically, leaping high to grasp the ball out of the air before the Mansfield supporters could even dream of it hitting the net. Mansfield broke at pace from left to right, Mellis finding Tyler Walker who hit a hard-driven cross to the back post but Rose’s first touch took the ball out for a City goal kick.

The Imps introduced Matt Rhead and Green late into the game as they continued their quest for the winning goal, the fans ramped up the volume to play their part and how it paid off. Rhead won the header to flick wide to Andrade his low cross was held up by Green and KELLAN GORDON smashed home from close range to send the fans wild.

Mansfield pressed quickly for an equaliser, but found City’s defence impenetrable despite throwing on two late attacking substitutions but at the death the visitors were to net an unlikely equaliser as Mellis lashed home from the edge of the box.

All general sale home areas have sold out for this weekend’s fixture against Mansfield Town this weekend.

However, with the buyback scheme being now open, you should keep your eyes on the Eventbrite page HERE, supporters should click the ‘Season Ticket Buy Back’ option on the normal ticketing page to be able to purchase any tickets that become available through the scheme.

Any available tickets will start to be released from 7pm this evening (Monday 19th November).

Please be reminded that there will be NO TICKETS for sale at Sincil Bank on the day of the game ahead of the 1pm kick off on Saturday 24th November. 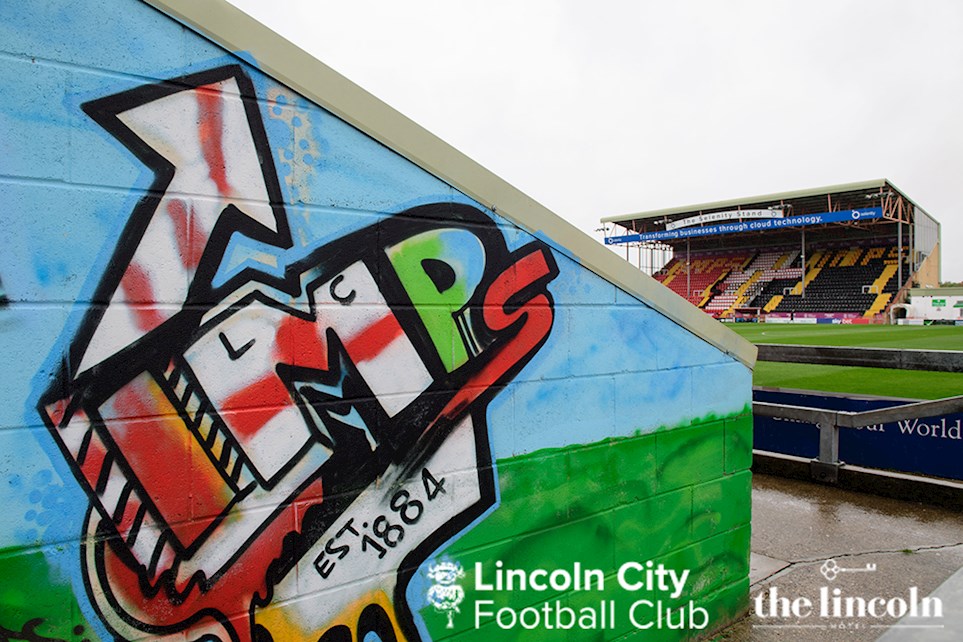 
The Club are pleased to be able to open the BuyBack Scheme for the upcoming SkyBet League Two game, against Mansfield Town on Saturday 24th November which is a sell out.