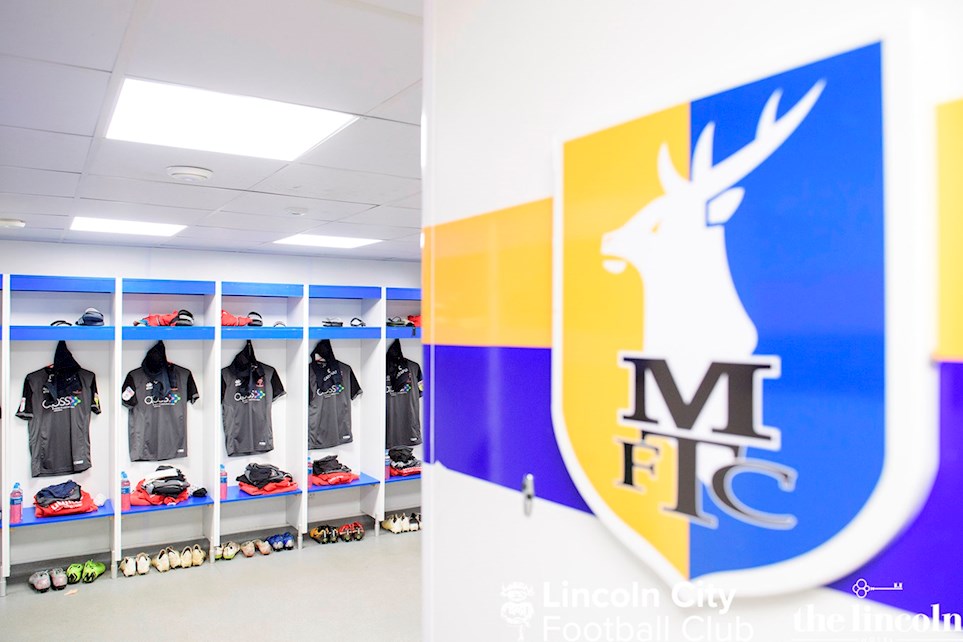 
The Imps make two changes to their starting line up from the side which defeated Oldham Athletic last time out as we await the kick off in tonight's SkyBet League Two Clash against Mansfield Town at...


Mansfield Town have advised us of the following information for all supporters of The Imps travelling to One Call Stadium this evening for the SkyBet League Two clash with the Stags kicking off at...

The Imps picked up a vital point coming from behind to edge a little further ahead of the chasing pack in an intriguing encounter against Mansfield Town.

The Sky cameras were to see the hosts take the lead early through Krystian Pearce but despite a barrage of early pressure, Danny Cowley’s men showed grit and determination to share the spoils courtesy of a John Akinde spot kick in the second half and go fifteen games unbeaten in SKyBet League Two.

City started the game with two changes to the side that defeated Oldham Athletic last time out, with recalls for Danny Rowe and Michael O’Connor as Tom Pett and Matt Rhead dropped to the bench.

The game got underway in front of the live Sky Sports cameras with a raucous atmosphere in the stadium with both sets of supporters in fine voice. Mansfield pressed for an early opener with Jorge Grant winning a corner and they were to break the deadlock, the ball was swung in and Krystian Pearce leapt highest and nodded home inside a congested penalty area. With their supporters urging them for more The Stags pressed hard for a second, winning their second corner in the opening ten minutes however, The Imps weren’t to be breached for a second time as they defended well before pushing forward and winning a corner of their own.

The Stags were then to be almost caught on the break, Danny Rowe made a wonderful burst from midfield, carrying the ball 30 yards, playing it into the feet of Mark O’Hara and his first-time ball was played to Harry Anderson but he couldn’t quite keep his balance. City then were close to the equaliser, John Akinde doing excellently to play the ball wide to Anderson and his low crass caused havoc but was just cleared by Pearce with Rowe closing in.

The game was becoming a little stretched with both sides looking to attack with pace, but thenext attack of note came from the visitors when Bruno Andrade who warmed the palms of Conrad Logan in the Stag’s goal. Tyler Walker was then left with his head in his hands when he mishit a good chance for the hosts following a pacey break by CJ Hamilton found him inside The Imps area but the Nottingham Forest loanee scuffed his effort.

Pace was certainly the order of the day for the home side, Jorge Grant was looking threatening and he won a free kick some 25 yards out in a central position, but Grant’s effort was easy for Matt Gilks to gather.  The Imps were to cause panic inside the Mansfield area as a corner was drifted into the box, it pinballed around and Michael Bostwick tried to smash the ball home but it was blocked, then O’Hara almost looped a header past Logan after good work from Andrade skipping past Gethin Jones on The Stag’s right.

It was a real contest as both sides were terrier like out of possession and thundering into challenges adding to the atmosphere, and the City supporters were close to adding to that even more when a wonderful neat move between Rowe, Andrade and Harry Toffolo led to a low driven ball which Logan did very well to gather at the near post. The Imps were growing stronger heading into the break and arguably would have not wanted to hear the half time whistle blow.

Both sides remained unchanged as the second half got underway, and The Imps were on the front foot but a quick break from the hosts ended with a audacious backheel from Grant which Bolger did tremendously well to read and block. City were moving the ball better, passes were finding their target with pace and they won a couple of corners in quick succession with just five minutes gone, the hosts did well to keep out The Imps who were certainly hungrier than ever for the leveller.

With City pushing forward the space in behind invited CJ Hamilton to stride into and he broke free on halfway he was cleverly forced wide by Neal Eardley, before getting his shot away which Gilks saved confidently at the near post. But it was to be just a brief reprieve for the hosts as The Imps pushed for another corner from which Rowe tried a snapshot on the edge of the box but it drifted wide of goal.

Mansfield then were to breathe a huge sigh of relief when Logan just managed to grasp the ball at the second attempt as he dropped a wonderful low cross from Toffolo with Anderson just ahead of the ball when the ‘keeper fumbled meaning he couldn’t quite get his foot around the bouncing ball.

Walker turned a cross wide of goal from a right-wing cross by the Stags, before another fast break by Hamilton was then cut out with Bolger sliding in, his timing impeccable as Walker lurked with intent inside the six yard box.  Mansfield were having their turn to press, but City were resolute and not letting the home side the freedom to shoot. Andrade however was afforded space to get an effort away, his low effort skipping off the turf, gathering pace but screwing just wide of the target.

Akinde was the next to bring Logan into action, a back post looping header was carrying towards the path of Andrade but the Stag’s custodian was called upon to punch clear. The visiting side were taking possession with frequency inside the Mansfield half, edging further forward with almost every attack but the final ball was just missing it’s intended target.  City kept pushing, persisting and the opportunity for the equaliser was to come when Akinde won another aerial battle, Anderson raced after it and just neat Logan to the ball but was poleaxed. AKINDE stepped up and cool as ever slid the ball home to the ‘keeper’s left into the goal netting his 16th goal of the season.

Mansfield pushed for an instant response, Pearce getting onto a floated ball into the box which forced Gilks into a smart stop reminding the visitors the game was far from finished as a contest and it was just setting things up for a potential grandstand finish. Logan did well to get down to an Andrade effort from inside the area and then Eardley tried his luck from distance but couldn’t find the target.


The Imps make two changes to their starting line up from the side which defeated Oldham Athletic last time out as we await the kick off in tonight's SkyBet League Two Clash against Mansfield Town at...


Mansfield Town have advised us of the following information for all supporters of The Imps travelling to One Call Stadium this evening for the SkyBet League Two clash with the Stags kicking off at...

Ahead of our trip to Mansfield Town in SkyBet League Two on Monday March 18th (7.45pm kick off) at the One Call Stadium we are able to provide supporters with the relevant ticket and transport information.