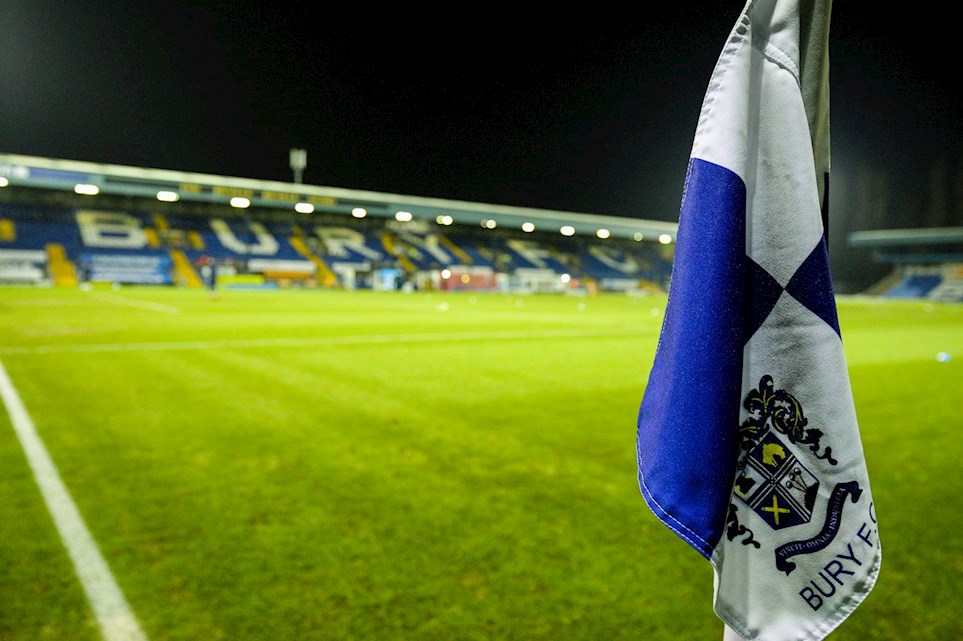 
The Imps’ visit to face Bury in SkyBet League Two later this month is to be broadcast live on Sky Sports.

Under the glare of the floodlights and the Sky Sports cameras, the scene was set for the top of the table clash on a very wet and windy evening in Lancashire and it didn’t disappoint as The Imps picked up a point in a six-goal thriller against Bury.

City took an early lead through Danny Rowe’s third goal in two games, before the hosts responded quickly as Jay O’Shea hammered a low long ranger home six minutes later. The scoring continued as The Imps retook the lead, courtesy of a Chris Stokes deflection from a Cian Bolger shot. The Shakers levelled again when Nicky Adams sidefooted home from inside the box.  John Akinde netted a third for the visitors just past the hour mark and it looked like it would be the winner but Will Aimson ensured the home side had a share of the points, heading home with four minutes remaining.

The Imps made one change to their starting line-up as Lee Frecklington returned to the side whilst City’s two newest additions to the squad, Jordan Roberts and Mark O’Hara took up a place on the bench.

The conditions were far from ideal as the rain lashed down on what was already a very slick pitch as the game got underway, but City certainly weren’t being hampered by the weather as they were playing the ball around with confidence.  However, the home side when in possession were equally as adept, moving things quickly and looking to get shots away but they found no way past Jason Shackell and former Bury loanee, Cian Bolger.

The first chance of the game came the way of the visiting side and it was finished with deadly efficiency by DANNY ROWE, the Imps number 19 pounced on a slip from Chris Stokes to take possession of the ball and sprint towards goal, he delayed getting an effort away to create a little more room before firing low past the despairing dive of Joe Murphy and into the bottom corner.

The visiting 1,000 or so supporters were so close to being off their feet again within a few minutes of the opener as John Akinde took control, taking the ball forward before slipping it wide to Harry Anderson who took aim and fired on target, but this time Murphy was equal to it.  However, Bury were to get themselves level on the quarter hour mark, Jay O’Shea with a low piledriver from 25 yards which skipped off the turf and into the bottom corner.

The goal invigorated the home supporters who were now baying for their side to get the second while the Imps fans were still in fine voice, as City were on the backfoot momentarily but yet again the solidity of the defence was key, Shackell making a vital interception as a dangerous ball was swung into the box by the home side.

The game was certainly living up to its billing as both sides were keen to show their teeth in attacking areas, Harry Toffolo tried to emulate the strike from the home side but his effort skidded just wide before Callum McFadzean found space down on the overlap down the left to cross but Bolger read it tremendously to clear.

However, The Imps were to get the third goal of the game following a free kick from the left, Rowe floated it into the danger zone and Akinde was in the mixer, he got his head to the ball the home side thought they’d diverted it clear but it fell to Bolger who put his foot through it at the back post as it arrowed goalwards the ball cannoned off Stokes and into the goal.

Much like after the first City goal of the game, the home side still were full of confidence and were left frustrated when Grant Smith was in the right place to save an effort from Nicky Maynard from inside the area in a central position.

Maynard was to spurn an opportunity after O’Shea carried the ball around 20 yards, conditions were worsening and a few players were beginning to struggle to maintain their footing as half time approached. City couldn’t maintain their lead though as Danny Mayor and Dominic Telford linked down the left, the low ball into the area from Mayor deflected out to Nicky Adams and he sidefooted home from 12 yards.

The action wasn’t over though as The Imps won a late corner and Bolger was unlucky as he got on the end of the set piece played by Rowe, but his diving header didn’t trouble the ‘keeper.

City were close to getting back in front within a couple of minutes of the restart, Akinde battling to win possession before supplying Rowe with the ball, he outpaced Stokes into the box and lashed a shot just into the side netting. The Imps continued to press, now attacking towards their supporters behind the goal in the second half as the rain restarted, but the supporter’s spirits weren’t dampened as they continued to back the visiting side.

Bury though, as they had shown in the first half, weren’t going to settle for things as they looked to take the lead for the first time in the game. A lofted cross went from right to left, it was pinged back in by Mayor, but Shackell cleared from inside the six-yard box.

The Imps hit back at breakneck speed and to devastating effect, Anderson showed all his pace to get the wrong side of the Bury defence only to be brought down from behind and the referee pointed to the spot. Up stepped AKINDE to coolly send Murphy the wrong way for his 12th of the season and 10th in the League.

The Shakers looked to build for a third of their own, but the resolute Imps weren’t in generous mood, keeping out Bury down the right.  City gave a debut to Jordan Roberts, the Ipswich loanee came on for his fellow Tractorboy’s colleague, Rowe with twenty minutes to go. Byron Moore came on for the hosts and he was close to creating a chance as he got in down the left, but his low centre was confidently cleared by Frecklington who was back helping out in the heart of the box for City.  Mark O’Hara came on for his City debut with 15 minutes to go as The Shakers began to throw caution to the wind, but still they found Shackell and co as immovable objects.

Toffolo cleared for the first of two quick corners as the home side pushed harder than they had all game trying to salvage a point, Bostwick threw himself infront of a piledriver from O’Shea and the pressure put on Adam Thompson in the box caused the Shaker’s defender to scoop the ball over the top.

The scoring wasn’t over though as the hosts snatched a late equaliser, Will Aimson meeting a right-wing corner with a thumping header which gave Smith no chance. The home side continue to pile on the pressure as injury time crept closer, with all hands to the pump the City defence had to withstand a real push from the Shakers and when Neil Danns hit a low effort the home fans thought it may sneak in but Smith was there, diving to save low to his left.


The Imps’ visit to face Bury in SkyBet League Two later this month is to be broadcast live on Sky Sports.