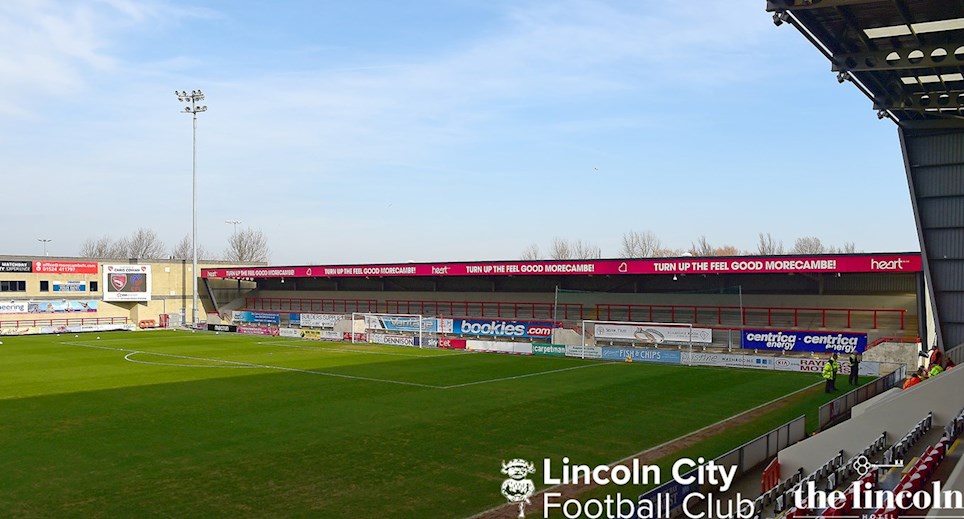 Bruno Andrade was the man of the moment yet again as The Imps picked up all three points against Morecambe at the Globe Arena, and their first double over SkyBet League Two opponents this season.

Andrade netted a goal early in both halves, making it nine for the season so far and six in his last four games. It was a professional, workmanlike performance from City that was smattered with glimpses of real quality which ultimately won the day and kept Danny Cowley’s men at the top of the table.

City welcomed Matt Gilks and Mark O’Hara into the starting eleven for the first time for their full debuts as Danny Cowley made two changes from the side which drew against Stevenage last weekend.

Grant Smith and Lee Frecklington were the two who were replaced as Danny Cowley’s side looked to get back to winning ways as they took on Morecambe at the Globe Arena.  The Shrimpers were aiming to extend their recent good run of form against the table topping Imps on the day that the home supporters were celebrating the 40th birthday of their striker, Kevin Ellison.

The visitors were backed by over 700 supporters making the lengthy trip over the Pennines to the West coast and they were in fine voice when City won an early corner and they almost had a goal to celebrate when a ball in from Danny Rowe almost sneaked in at the near post but for an alert Mark Halstead in the Shrimper’s goal leaping to grasp the ball.

As a contest it was a competitive one, with Morecambe looking to get in down the flanks, but Harry Toffolo was on hand to clear a dangerous low centre which Pietro Mingoia thought he was going to profit from at the far post.

However, it was the Imps who took the lead with just ten minutes on the clock. Mark O’Hara stepping in to take possession midway inside the Shrimper’s half, he looked up to slide the ball out wide to BRUNO ANDRADE on the right, and the City number eleven did the rest by sidefooting the ball into the goal off the underside of the crossbar. The impetus was with the visiting side and they looked to get into a two-goal lead, Tom Pett just seeing his route to goal blocked as he unleashed a shot which appeared to have Halstead worried, but before it got to the stopper, the ball cannoned off Steve Old before being lashed to safety.

Within moments the home side then had Zak Mills to thank as Andrade almost found Danny Rowe in the box, the deflected shot from the City number eleven looked to be rolling into the path of Rowe but Mills threw himself in the way to clear.

The Imps were in confident mood, attacking quickly down both flanks and were close to scoring a second midway through the half, a free kick from the right was pinged into the danger area causing havoc but despite the best efforts of City the ball couldn’t quite be forced home.  Rowe forced Halstead into a save down low to his left with a shot from distance as the visitors were monopolising possession for a spell.

Morecambe’s opportunities as a result were few and far between with a couple of quick set pieces adding to anything of note, however neither resulted in a save having to be made by Gilks. The Shimpers were growing in confidence but yet again, it wasn’t anything to trouble the City stopper as Gilks came to confidently claim a left wing cross from Ritchie Bennett.

The Imps were again close to a second goal just ahead of the break, O’Hara won the ball back from under the nose of Carlos Mendes-Gomes, he fed Rowe who showed three home defenders a clean set of heels, the ball was slid to the overlapping Harry Toffolo whose low centre was cleared just ahead of John Akinde who was looking to pounce.

Morecambe did force Gilks into a save on the cusp of half time, a free kick from Jordan Cranston clipped the City wall but the City ‘keeper was well placed to save with relative ease.

There were no changes to either line up at half time and when the game got back underway the visitors had the foot to the gas, forcing a save from Halstead as Rowe and Eardley worked a slick free kick routine leaving the former to get a shot away that the home stopper saved at his near post.

Morecambe’s fans who were behind Gilks’ goal in the second half were doing their utmost to rouse their charges but the City supporters were in fine fettle too, but the difference was they had a second goal to celebrate just 12 minutes into the second half. Pett linked with Akinde but his first touch just took the ball out of reach for the shot, the home defence jumped in but could only loop the clearance into the air to which O’Connor leapt to head down before ANDRADE took control, his first shot was blocked but he pounced onto the loose ball to slot home in front of the City fans.

The goal knocked the stuffing out of the home side somewhat, and they made a double substitution to try and reinvigorate their chances but when they did create any space to cross, they found Gilks confident in claiming the ball despite traffic in front of him. The Imps continued to press, looking to hammer home a third goal and put the fixture out of the reach of the home side, Rowe’s slide rule through ball just skipped off the turf away from the onrushing Akinde with Halstead gobbling up possession ahead of the City striker.

Shay McCartan came on for Andrade and the sub was right in the thick of the action, linking superbly with Rowe inside the box, but the passing was just too intricate as the ball spun away from the Ipswich Town loanee at the last.

The visitors were holding their shape, Pett working hard down the left in and out of possession ably assisted by Toffolo, the full back pushing forward but also denying Ellison a birthday goal intercepting on the edge of the area. Morecambe went closer moments later, a cross was played into the box and it pinballed around in the area before being turned goalwards and somehow, Gilks got down low quickly throwing out a strong right hand to save right on the goalline.

It proved to be a fruitless push from the home side who couldn’t breach the Imps’ defence who took almost everything in their stride, frustrating the Shrimpers as City looked to manage the final few minutes of the game. When the officials announced seven minutes of stoppage time, the home supporters briefly urged their players forward, but Pett almost smashed home a third for City right at the death with a burst into the area and shot which was well held by Halstead.