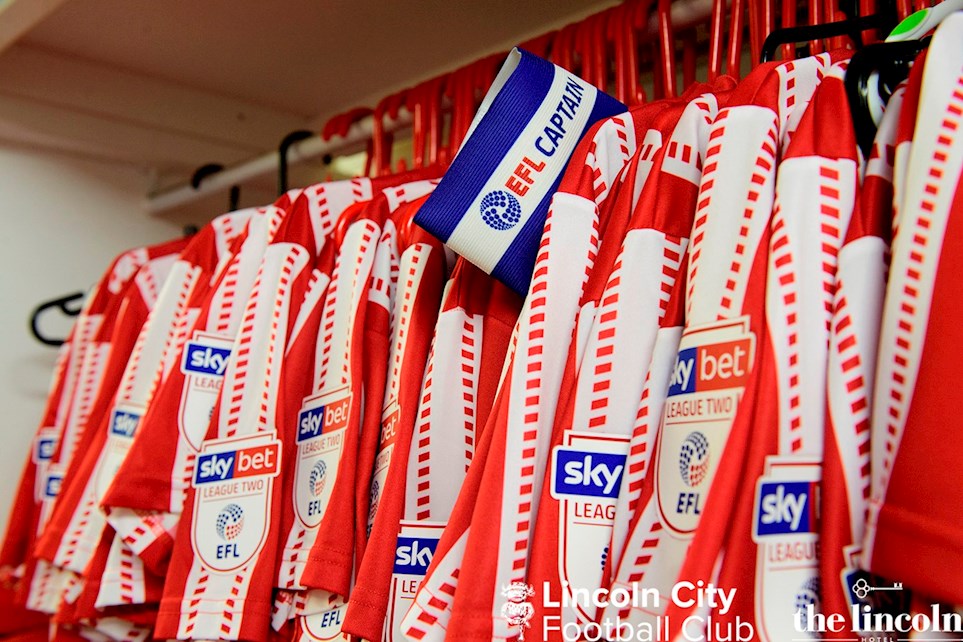 
City keep the same side which started the game against Morecambe last weekend, Bruno Andrade is fit to face the Grecians with Matt Gilks making his first start at Sincil Bank and Mark O'Hara also... 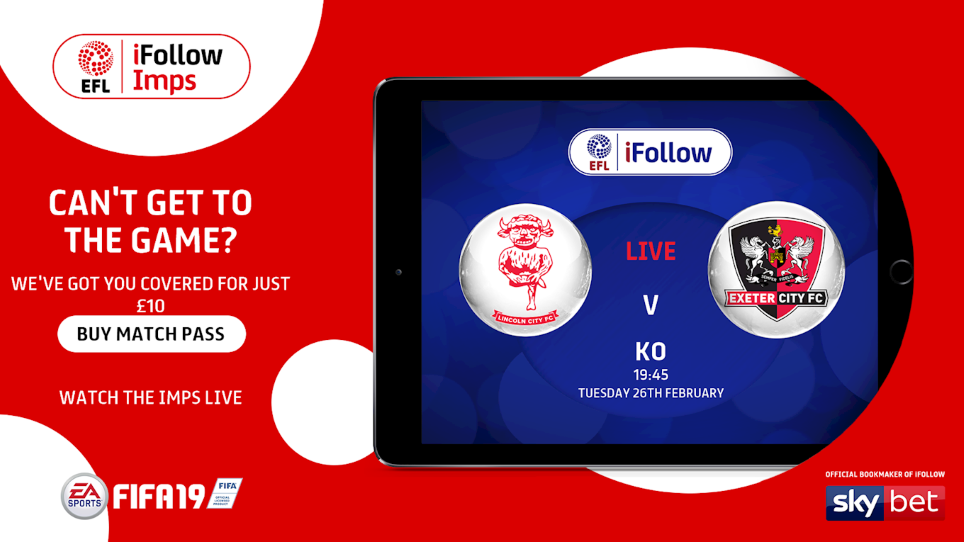 
Can’t make it to Sincil Bank on Tuesday evening to see the Imps take on Exeter City? Don't worry, you can still keep up with all the action LIVE via Imps iFollow.

The Imps snatched a late equaliser at the death against Exeter City to pick up a point against the Grecians who appeared to be leaving Sincil Bank with all three points.

The visitors thought they were going to inflict only the second home defeat of the season on The Imps thanks to the right boot of Matt Jay, the Grecian’s number 17’s freekick midway through the first half appeared to be the only goal of the game, however with only seconds left on the clock John Akinde smashed home at the near post to give Danny Cowley's men a share of the spoils in dramatic fashion. The point moves The Imps three points clear of second placed Bury at the top of SkyBet League Two

City stuck with the same starting eleven that defeated Morecambe last time out, with Matt Gilks and Mark O’Hara kicking off in Imps’ colours for the first time at Sincil Bank and they were welcomed by a fantastic atmosphere when the game got underway under the lights.

The noise in the ground certainly had an influence on the tempo of the action on field, The Imps were pressing high and the movement of John Akinde was causing problems for the visiting defence.

It was as hotly contested as everyone would expect from two sides gunning for promotion from SkyBet League Two with space and opportunity not coming easily, but it was the hosts who were making the inroads and shading things in possession and attacking areas.

Akinde almost profited from a lovely touch and slid pass round the back from Neal Eardley, but the striker was always being pushed a little wide, however he did get his shot away and force Christy Pym into a save at his near post.

Kane Wilson was a lively character out on the right for the Grecians and he was doing his bit to create something as the game passed the quarter-hour mark, with quick feet the Exeter wideman was able to create room to cross but Gilks was alert to the danger calmly gathering the low bouncing centre.  The visiting number 20 was at it again moments later, this time his low cross was adeptly dealt with by Jason Shackell who cleared for a corner but any threat was quelled instantly by Gilks who commanded his area to claim the lofted ball into the area.

Exeter started to get a grip on possession and were spraying the ball around confidently from left to right, but with The Imps defence holding station there was seemingly no way through for the visitors. Although the visitors thought they had won a penalty when Ryan Bowman went down, but it was just outside the box on the left hand side. However, the set piece was to be the opportunity they needed as Matt Jay hit a wicked, curling free kick that soared across the box and into the far corner giving Gilks no chance.  The visitors had an opportunity to make it two in as many minutes when Kane Wilson crossed and Donovan Wilson leapt to meet the ball, but his header looped over the top.

The Imps seemed initially shellshocked, but in typical fashion shook off the disappointment and pushed for the leveller. Michael O’Connor switch play wonderfully into the feet of Bruno Andrade, who backheeled to Harry Toffolo and his early cross was almost turned home by Tom Pett, his header just flashed over the top.  It was a precursor for the home side to regain an element of control, Toffolo and Andrade were beginning to get their link play going and they created a half chance for Akinde who did well to beat his marker to the ball but was put under sufficient pressure that he couldn’t get his effort on target.

Shackell won a header in the box from a Danny Rowe cross, but the ball went wide as the fans once again tried to lift the players as half time edged closer.

Pett took things by the scruff of the neck after Akinde leapt to win possession, the midfielder took possession and ghosted beyond two visiting defenders and lashed a shot low on target which Pym did well to grasp at the second attempt as The Imps finished the half the stronger of the sides.

City pressed high and hard early in the second half, forcing the Grecians deep into their own territory winning a corner within 2 minutes of the restart. Rowe played in a dangerous inswinger that Pym had to punch clear under pressure, O’Hara turned the ball back towards goal but the referee saw an infringement and play was halted.  The visitors stood strong and didn’t allow The Imps an opportunity, so Danny Cowley shuffled his pack bringing on Shay McCartan for O’Hara to try and lever the game back their way.

The Northern Irishman was involved in the next City attack, showing skill and awareness to backheel the ball into the path of Rowe who dance into the box before poking a low cross into the danger area, however Craig Woodman was there to clear.  Andrade was the next to make a foray into Grecian’s territory, latching onto a knockdown on the left to cut inside and fire a shot from range, only to see it loop over the bar.

Exeter were keeping their shape and concentration well as The Imps were trying to unlock the door, a low centre from Andrade just took a nick off Woodman which affected the flight off the ball and away from Akinde in the box. Up the other end of the field the visitors looked confident in possession and they were inches away from netting the second after a driven cross from Kane Wilson was somehow not turned home by Bowman from inside the six yard box.

The near miss only served as inspiration for the hosts who were backed yet again by their supporters, Andrade had a shot from distance deflected wide as The Imps looked to lay siege on the Grecians goal and it was City’s number eleven who got a shot on target although in truth it was an easy save for Pym.  The Imps then argued that they should have had a spot kick when Akinde appeared to be brought down from behind by Aaron Martin, the ball bounced past Pym and with everyone looking at the officials it hit the post, the whistle wasn’t blown and play continued with the visitors clearing the danger.

It was all hands to the pumps for Exeter who had to withstand more pressure than they had experienced all game, McCartan was brought down on the edge of the area in a central position by Martin giving the Imps a chance to level. McCartan tried to clear the wall, it rebounded to Michael O’Connor who clipped a clever ball out wide where Pett attempted the first-time volley but couldn’t keep it down.

Somehow the Grecians managed to keep out The Imps who poured forward in search of the equaliser, Shackell denied by a diving block by Woodman as his effort arrowed towards goal. With four minutes of stoppage time announced the hosts did everything they could, throwing everyone but Gilks forward as they won a late corner, somehow the ball was cleared off the line as McCartan smashed through a sea of legs and it appeared it just wasn’t to be. Exeter made a late sub and had a player down injured, meaning a little more time was added to the clock and it proved pivotal as AKINDE somehow managed to wriggle free inside the box and smash a low shot past Pym to send the home fans into absolute delirium. 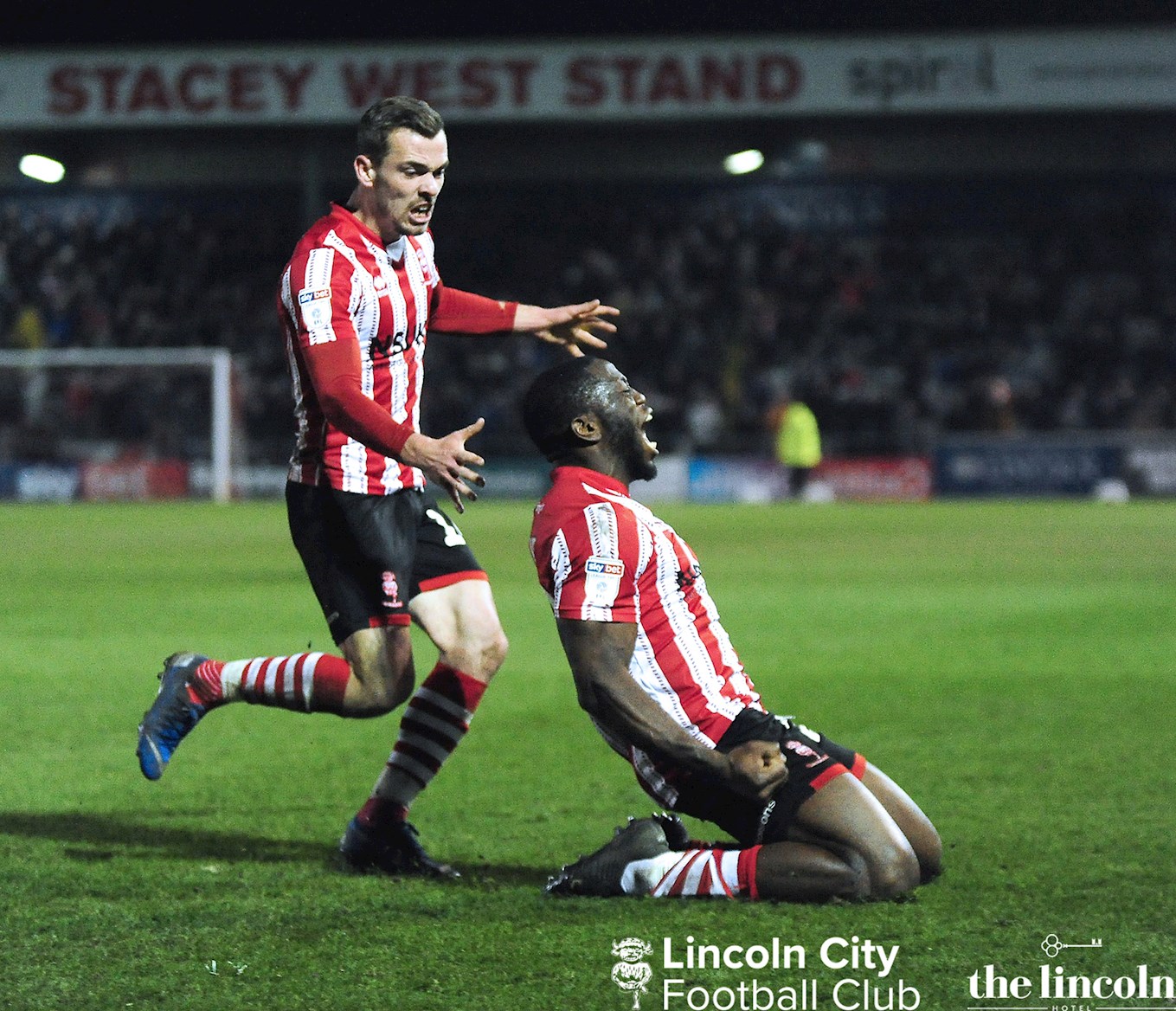 
City keep the same side which started the game against Morecambe last weekend, Bruno Andrade is fit to face the Grecians with Matt Gilks making his first start at Sincil Bank and Mark O'Hara also...


Can’t make it to Sincil Bank on Tuesday evening to see the Imps take on Exeter City? Don't worry, you can still keep up with all the action LIVE via Imps iFollow.