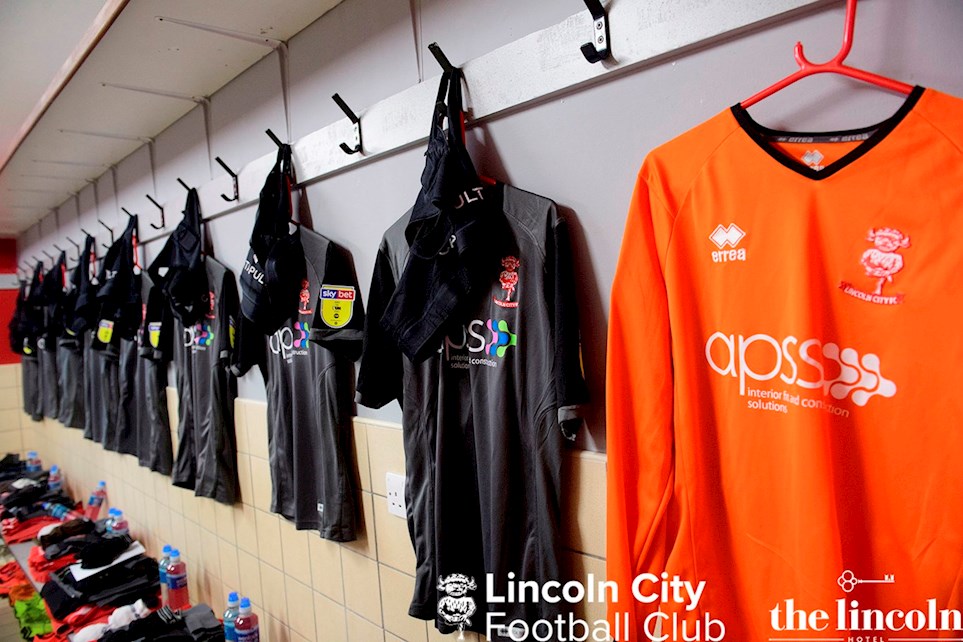 
The team news is in at Rodney Parade as The Imps take on Newport County in their final game away from Sincil Bank in SkyBet League Two this afternoon.

City slipped to defeat at the hands of playoff hopefuls, Newport County at Rodney Parade on a wet and windy afternoon in Wales. The Exiles took the points by a solitary goal scored in the opening ten minutes of a competitive game in difficult conditions. Scot Bennett netting what was to be the winner for Michael Flynn’s side.

The Imps were given a guard of honour before kick off by the home side who showed their respect to the visitors on winning the SkyBet League Two title on Easter Monday. But it wasn’t the only thing welcoming the sides as the conditions were a little distracting, the sun was beaming down over Monmouthshire as the game began but it was the wind which was the main issue for both sides as they entered the pitch at Rodney Parade.

The home fans were celebrating the career of their defender David Pipe who was walking onto the pitch as an Exile for the first time after announcing his retirement from football before kick-off and they thought they had the ideal start to the game too when Padraig Amond tried to hook a shot goalwards within the opening couple of minutes, but it went well wide of the mark.  Their optimism was almost shut down moments later as a fantastic quick break from City brought the first shot on target, John Akinde involved at the edge of the box teeing up Mark O’Hara to drill a low shot which Joe Day watched all the way before grasping possession.

However, the home fans were off their seats with seven minutes gone as Amond did well to get into the box on the left, his low pull back from the goal line found Scot Bennett around ten yards out and he smacked the ball home off the underside of the crossbar.
The Imps were close to pulling a goal back within a couple of minutes, Akinde causing problems and the visitors couldn’t clear their lines, O’Hara got onto the bouncing ball and lined up a half volley but he couldn’t get over the ball enough and his effort flew beyond the frame of the goal.  O’Hara really was in the thick of it, following a long throw into the box the City number six was again shooting, this time it cannoned off a defender and squeezed just wide of the target.

The wind was blowing in the favour of City allowing the visitors to make quick breaks forward which was always going to give the home side issues, and The Exiles were being forced back but defending well enough to limit the space afforded to the visiting side.

Mickey Demetriou had two bites of the cherry to get a shot away from the left angle of the City area which Vickers had to get down smartly to save, but then play yet again moved back to the other end of the pitch as The Imps won a corner but Matt Rhead couldn’t turn it home at the back post under pressure.

As the first half wore on, the pitch was arguably becoming as much of an issue as the atmospheric conditions, the ball was bobbling up on the uneven surface which was also getting very loose underfoot for both sides as players started to lose their footing. But City almost got themselves level when a quick, precise link between Akinde and Michael O’Connor left the City midfielder with an opportunity to shoot and he forced Day into the stop. Kennedy fired a low effort which Vickers stood straight down the barrel of, before both sides took in some well-earned fluids as Cian Bolger went down needing attention from the physio after an earlier aerial collision which resulted in the City man being bandaged up.

After the delay, The Imps were close to getting back on level terms, Rhead and Akinde were again causing problems, the knockdown from the former just inside the area was to be prodded into the path of Harry Anderson by O’Hara but Anderson couldn’t keep his shot down.   City were having more and more of possession as the game edged towards the interval and they were so close to getting the elusive equaliser in first half stoppage time. Rhead won the aerial battle with Demetriou, flicking the ball to Akinde who played the ball right across the edge of the six yard box where Anderson was sprinting in but his outstretched right leg just wasn’t long enough to turn the ball home at the back post. Rhead then tried an audacious first time volley from Akinde’s knockdown but the ball flew over the top then the number nine forced Day into a save on his goalline right on half time.

City introduced Shay McCartan ahead of the restart as they prepared to be kicking against the wind in the second half, but it was Danny Rowe who was close to fashioning a chance for the visitors. The Ipswich Town loanee danced beyond his marker on the left before clipping in a dangerous cross which just eluded Akinde at the back post.

The game was edgy as both sides looked to secure the second goal of the game which could prove pivotal, there was a flashpoint on halfway which resulted in two City players being cautioned which certainly made the atmosphere a little more hostile for the visitors.  Typically undeterred, The Imps continued in their search for the equaliser and Bruno Andrade came on for the visitors as the rain began to lash down onto what was already a heavy pitch.

The hosts were close to extending their lead as Robbie Wilmott curled in a dangerous bouncing free kick that went straight through the middle of the box, it skipped off the turf and the County number seven thought it was going to nestle in the corner but Vickers made an astonishing save, throwing out his left hand to somehow palm the ball away. The Exiles were to throw more caution to the wind and thought they’d been given the perfect opportunity when Kennedy’s cross was met by the onrushing Matthew Dolan but his header went harmlessly wide. Vickers then denied Amond and Dolan from close range with the home fans still dreaming of a late run into the playoffs for their side with four sides in the top ten level and all in with a shout of extending their season.

The home side had been in the ascendancy for quite a period but their positivity was close to being shut down when Rowe did very well down the left, his purposeful burst created room for a low cross, the ball in was pounced on by Day but he spilled the ball but it was cleared with Akinde in close attendance.

Demetriou headed a half chance into the arms of Vickers following a corner for the home side, before Tom Pett on as a late substitute almost broke free immediately following the save at the other end of the pitch.  With City throwing men forward it allowed Newport the chance to break and when Adebayo Azeez laid the ball back to Wilmott who struck the ball cleanly, the home fans were off their seats holding their breath in anticipation but Bostwick, as committed as ever got his head in the way to block.

Rowe created space by playing a nice reverse pass into the feet of McCartan who in turn crossed into the danger area for City but Mark O’Brien got there ahead of Akinde as The Imps continued to be frustrated in front of goal with time running out. City were then to get their best chance of the game as Akinde and McCartan closed down Demetriou to win back the ball, it left McCartan to race into the area, he looked up with Akinde in support but elected to go alone, the ball went past the outstretched hand of Day in goal, but also just inches wide of the far post.

With the game deep into four minutes of injury time at the end of the game, City had one last chance to level when Andrade was brought down around 20 yards from goal in a central position, up stepped McCartan but his effort cannoned off the wall.


The team news is in at Rodney Parade as The Imps take on Newport County in their final game away from Sincil Bank in SkyBet League Two this afternoon.