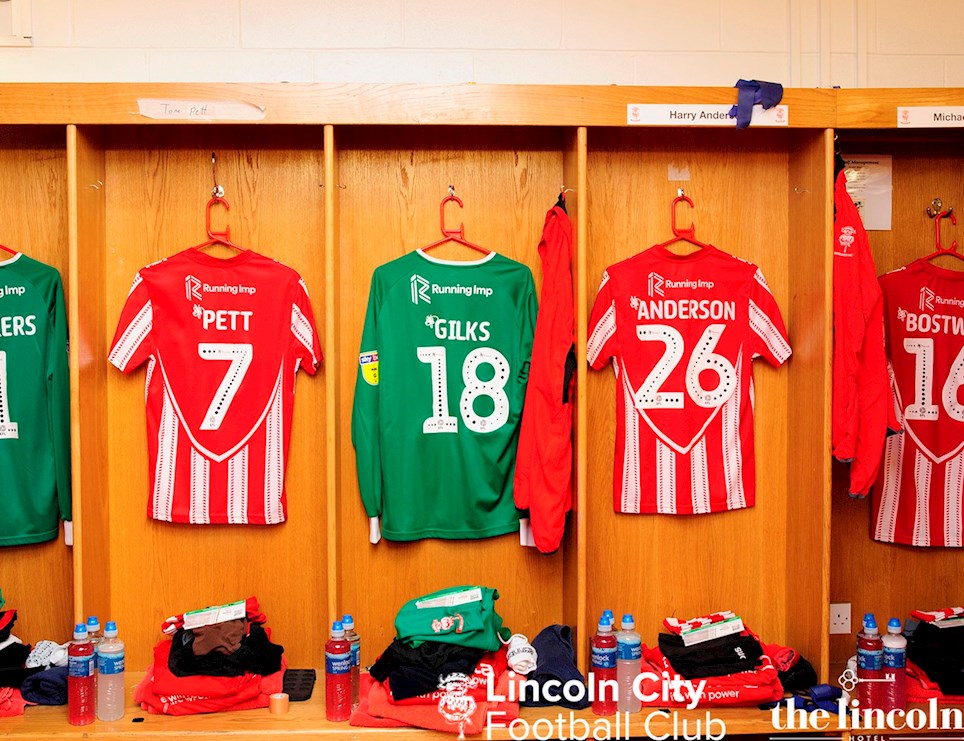 The Imps are CHAMPIONS of SkyBet League Two on a historic afternoon at Sincil Bank. City weren’t to taste victory to pick up the silverware but it didn’t matter as Mansfield Town and MK Dons failed to make up ground on The Imps. Proceedings ended goalless in the game at Sincil Bank in what was a terrific game for the neutral. But the story is, City are champions on an Easter Monday to remember.

City made four changes ahead of kick off, Matt Rhead, Michael O’Connor, Cian Bolger and Danny Rowe all returned to the starting line up, with Rhead captaining the side in the absence of Lee Frecklington and Jason Shackell.

Both teams were welcomed onto the pitch with almost every supporter in the stadium screaming their support for their side and within two minutes of kick off the visiting side had their skipper, Scott Davies, to thank for keeping his side in it. After John Akinde wrestled possession from the feet of Sid Nelson, he fed Rhead who in turn laid on the perfect pass for O’Connor to burst into the area but his shot was saved by Davies in the Rover’s goal.

The atmosphere was one befitting such an occasion with the sun beaming down on both sides, James Norwood was denied a shooting chance inside the City box by Michael Bostwick before Zoumana Bakayogo just managed to get to the ball ahead of Akinde as he looked to latch onto a ball forward from Neal Eardley. The game was being played at breakneck speed with the ball quickly going from one end of the pitch to the other with the final ball just being cut out by defences on both sides as the supporters, then Rhead broke that cycle by hitting a half volley from fully 30 yards which looped on target but Davies was in the right place to save.

The Imps were pressing high up the pitch with Akinde’s prescence a real threat, the City striker often occupying two Rover’s defenders as the ball headed into attacking areas. Going forward The Imps were teasing and tormenting the visitors, Bruno Andrade showing quick feet and skill to create just enough room to cross but it was inches too high for Rhead to get over.

Rovers went close as a high ball from right to left found James Norwood in space in behind the City defence, the Rover’s top scorer smashed his effort low to Matt Gilks’ near post and it looked to be heading into the goal but the City ‘keeper somehow got down to make a vital stop.  Rowe then tried to curl a measured effort in round the back of the Rover’s defence but the ball went over the top of Davies’ goal as the game continued to grip everyone in the stadium.

Rowe was an outlet for The Imps down the right, he danced round his marker, shaped to shoot and was brought down right on the edge of the area. The set piece didn’t affect the scoreline but it was in the midst of a period of intense pressure from the home side that somehow the visitors manage to withstand.  Harry Toffolo made a wonderful overlapping run which was supplemented by Akinde, the striker playing a slide rule ball back to the full back who won a corner, O’Connor pinged it into the area but again, Rovers defended manfully to keep the marauding Imps at bay.

Andrade linked with Toffolo to test the reflexes of Davies, then Eardley hit a low swerving effort which was cleared by Emmanuel Monthe as it arrowed towards the bottom corner with the Rover’s ‘keeper unable to get back to his feet after saving the initial effort.  City had dominated the first half, but with the score still locked as the half time whistle went, it left plenty to play for in the second half.

City began the second half in a similar vein to how they ended the first, on the front foot looking for the breakthrough with the visitors having little in terms of possession in The Imps half.  Rhead showed great strength on the edge of the Tranmere box to hold off his marker, first shielding the ball then sliding it out to Rowe whose low and hard cross was just cleared by Monthe.  The Imps were closing down the spaces, giving little option for Rovers and forcing misplaced passes as a result, while the home side were stretching play going from one side to the other quickly making the visitors do all the running but Rovers’ shape and defence was proving difficult to breach.

Tranmere tried a quick break through midfield of their own, a low curled ball was played between Bostwick and Bolger towards Norwood but the City number 16 slid in to perfection to take the ball away just as the Rover’s man threatened to break away. That gave the visitors a little impetus and they came forward quickly, twice in as many minutes they created shooting opportunities, James Harris blasted wide from inside the area then Norwood sliced an effort over the top from a promising position.

Before you knew it the ball was back in the Rover’s box and it again the goal lived a charmed life, Rhead finding space after Akinde caused problems, City’s skipper side footed goalwards but somehow Jake Caprice stuck out a leg to deflect it wide with Davies seemingly beaten.

Davies then saved the visitors as Toffolo hurled a long throw into the box which was met perfectly by Akinde, his header though was straight down the throat of the Rover’s ‘keeper who was well placed to grasp possession.

The visiting supporters thought they’d sneaked into an unlikely lead when Harris and Norwood were involved on the edge of the box, it freed Connor Jennings who slipped the ball past Gilks but the assistant’s flag was up for offside. Norwood was to warm the palms of the City ‘keeper as the game went into the final twenty minutes, then he screwed a shot wide after advancing into the Imps’ area moments later.

Things were on a knife edge, with both sides hungry for the points and it showed as they continued to throw players forward at any given opportunity but goals didn’t seem to be forthcoming. Toffolo’s fizzing centre just eluded Akinde at the back post before a Pett free kick was well claimed by Davies who came through traffic to clutch onto the ball. The Rover’s ‘keeper denied McCartan who hit a thunderous drive from just outside the area as the game crept into injury time then Mark O’Hara sliced a chance wide. With other results going the way of The Imps, the fans began to believe… Then the news came from Oldham that Mansfield had failed to defeat the Latics and it was all over.